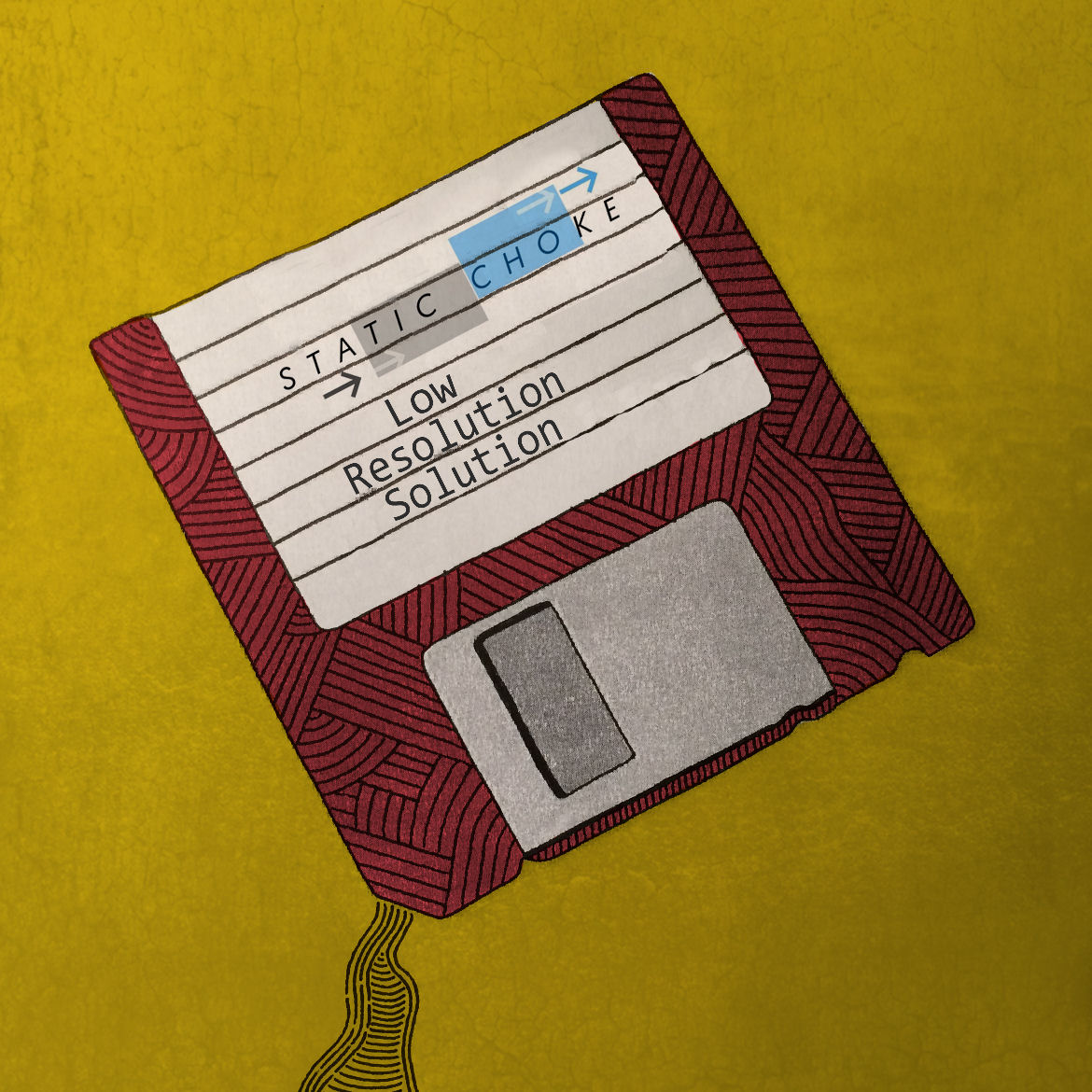 Let it not be said that you can’t accomplish a whole hell of a lot on the inside of two minutes if you know how to really make the most out of a moment in time.  Static Choke gets it – this three-piece band of punks prove they’ve got a lot to offer over the three short, less-than two minute tracks that make up the Low Resolution Solution EP.  Between their post-hardcore attitude and all out sonic forcefulness – for just three pieces with two minute songs, one thing is for certain – Static Choke sounds freakin’ gigantic.

Whether or not you dig listening to music that sounds like it could easily stomp you out, is of course up to you…Static Choke is like the music that Chuck Norris listens to when kicking the world a new ass.

I was hooked on this immediately though…I grew up on the gritty, gnarly, nutty and crunchy…the in-your-face attitude of the music on the Low Resolution Solution EP has a sick amount of character and commitment in its sound and I certainly dig that.  The moment that the guitars fired-up on “Big Bank Pimp” I was full-on stoked to hear the rest…like Dinosaur Jr.-esque tones with an approach like Built To Spill and then like, you know, ten-times the aggression, confidence and ferociousness.  Everything shows itself to be impressive quickly in this opening fireball…the drums from Vincent Baugh come ripping in quickly to drive the beat in all kinds of insane ways and the bass from Patrick O’Brien soon after that to fill in the sound perfectly as Gregory Grunder throws his weight into the mic and guitars.  Seriously impressed with the amount of melody that these guys have included into this song…hard as it is, it’s obviously a priority in the writing of the music in this band; they’ll go on to show it further in the other two songs “Phil” and “Embalmer” that round out the lineup of the Low Resolution Solution EP.  So make no mistake…they write hard, they play harder…but somewhere in the midst of the insanity, they still have a seriously firm grip on what it takes to really write an entertaining & memorable song.  I felt like each song on this record really shared the weight for what it’s worth; I liked something ‘the best’ in each song, something different each time.  “Big Bank Pimp” sure gets the award for a massive first impression – the vocals in the chorus and guitars really have an equally sick amount of hook & pull.

And then if we’re looking for the star verse in a song on this record, it’s “Phil” – which is like…damn…do I EVER love so much of this song…even the one part that bugs me!  Let me explain.  I mean…for me…for a guy that grew up on Nirvana, listened to the eventual shift into Foo Fighters and took in all kinds of stuff from Black Flag to No Means No to Mudhoney to Dandelion along the way – the verse absolutely hits that satisfying mark of lo-fi rock…garage-rock…damn near grunge…whatever you want to call it – this is the kind of rock that really makes you feel ALIVE.  No doubt about it for me – the verse of “Phil” SLAYED it…I love the way the guitars, bass & drums interact and really keep the intensity up.  So what bugged me?  They know what bugged me.  It’s the same thing everyone hears in this song at one point or another…and dammit, I can tell you for a fact they did it on purpose.  LISTEN to the way the chorus moves…and listen to that one beat that comes along that’s just a slight-step behind.  It ABSOLUTELY stands-out…I’m not so entirely sure for all the best reasons or intended results though…I’m honestly not sure.  I think they’ve taken a risk with that in there…that’s got real potential to throw people out of the hook and question the musicianship…but again, for those that listen, you’ll hear this is a repeated element in the song and inserted with a bold, professional precision; it might sound jarring or awkward to the ear, but it is done on purpose and really does end up giving “Phil” an added dose of something different.  Most of the times that I heard it come around on the playlist after I realized it was written purposely, I ended up with a huge grin on my face; it’s such a grunge/hardcore thing to do to take something that would work easily and then go dirty it up a whole bunch.  I dig it.  Overall, “Phil” takes that psychedelic-pop-60’s approach to its punk attitude in the verse…the chorus is very Nirvana-esque & that’s plenty cool with me…I’m still iffy on that one off-beat, but I dig the attitude in the expression more than that got to me.

“Embalmer” is probably the song that will reduce most Goliath’s out there to a mere David upon listening – this song is so brutalizing in its call-and-answer verse, punishing and unrelenting, storming and steaming…like it intends to crush bones into dust, snort them up and move on to the next village.  I felt like this third track, though perhaps maybe not the most universally-appealing cut on the EP, was probably the best summation of this band’s strength, power and songwriting…the sound that they’re really going for and best representation of the band they want to be.  “Embalmer” is a seriously beefy and powerful tune…Grunder holds nothing back and goes into full raging beastmode…yet still…once again…notice that Static Choke as a band never abandons melody.  As looming and as large as “Embalmer” becomes…there are still undeniable hooks that are strong enough to pull in all kinds of fans from the genres already cited to all-things rock.  I don’t know if it was just my own ears, but it also sounded like there was a noticeable increase in the clarity in the production of this final tune; which felt like it leaves us on a real high-note for where this band can head to in the future.  What I liked best was that even though it sounded more clean than the other two cuts by comparison, it really managed to still retain the sheer force and power that makes Static Choke a serious threat to any set of speakers or listening ears…you know, the best parts about this band!

I don’t know that I’d expect everyone out there to ‘get it’ – but I think they have some serious potential on display throughout Low Resolution Solution.  Besides…they’re punk enough to know not everyone’s gonna dig their stuff anyway and probably long, long past worrying about trying to convince the world they’re the best or write a chart-topping hit.  That being said…those that really dig music with impressive amounts of creativity in twisted, burning and monstrously short moments…you’ll dig this as much as I did.  Not sure I can even quite put my finger on it myself, but between the three of these guys I think they might just be a solid candidate to get some real post-grunge/post-hardcore music back on the radar – this is strong stuff.

Take the freakin’ five-minutes and twenty-nine second ride for yourself and find the EP directly at the official Static Choke website:  https://www.staticchoke.com