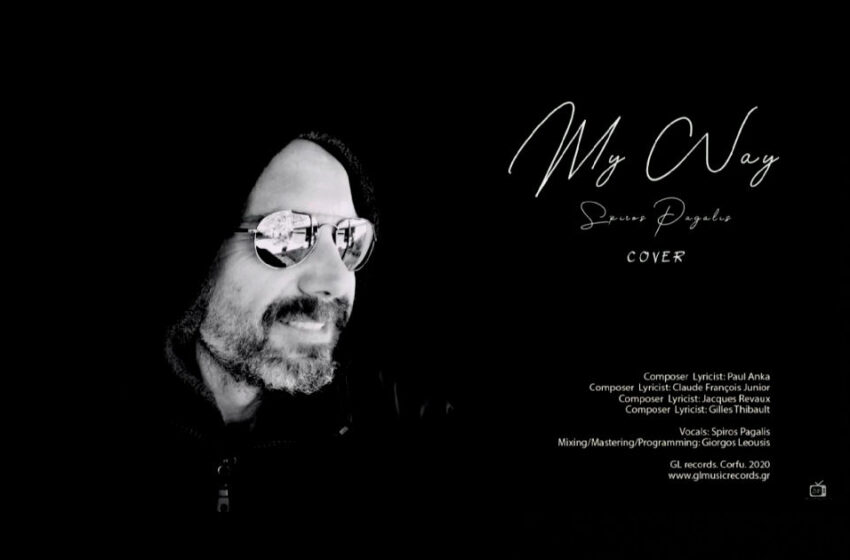 Well now – this is something ain’t it?  According to the notes I’ve got here, we’re more often gonna find Greek artist Spiros Pagalis in the Hip-Hop genre than in most others, but he’s also a self-admitted experimentalist when it comes to making music, and this cover/single he’s just released of “My Way” certainly confirms there’s a lot more goin’ on with this guy than merely two turntables & a microphone.

For what it’s worth, I actually learned something in checking out this song…a little piece of info that caught my eye on the graphic with the audio post at YouTube…as in, the credits!  There are likely a great many of you out there that likely associate “My Way” with the legendary Frank Sinatra, who popularized the song massively with his rendition – but that’s exactly what it was – the original was written by Paul Anka.  So for all of you out there that think I write from a place where I know everything and anything about music, there you go – there’s what I’d consider to be a fundamental fact we should ALL know when it comes to the history of music, and I fell way short of the mark this time around – I had no idea it was originally an Anka tune.  Proof that I hardly know everything, or anything at all really – I should have known a fantastic piece of trivia like this before, but you better believe I’ll be bringing it with me to the bars now so I can collect my free beer when they pull this question out from the bottom of a hat one day.  Thank-you Spiros!  I always appreciate it when I learn something about music I didn’t know before.

What I can tell ya for sure, is that I’ve always had time for “My Way” in pretty much every version I’ve ever heard – it’s essentially the very definition of a timeless tune.  While a quick flick through the talent shows on television or scan through YouTube would likely yield about a million other versions of this song – which is always something to consider when covering any tune out there as an artist or band – there’s always been something about “My Way” that brings out the personality in singers in such a noticeable way that you can always truly tell who feels the actual connection to this song, and who’s just singing it because they can.  Spiros will supply that magic you’re looking for in this piano-led variation of the classically revered hit-song – I love the wisdom that you can hear in the hushed tones of Pagalis’ style of whispered singing…you can hear the genuine connection between the man singing it, the original words, the emotion in the music, and the true meaning behind the words – and honestly, it’s what makes a cover of this song completely successful and separates it from so many others that are out there.  Spiros should be mighty proud of the way he’s performed such a well-known & beloved song – he’s done an excellent job of getting the true character in this single & the spark it needs right into the mix along the way where it belongs, and proves he’s more than up to the task of taking on such a monumental tune.  Considering the fact he’s generally a Hip-Hop artist to begin with, I think you have to give good ol’ Spiros here even more bonus points for finding a successful sound so far outside of what he normally does as an artist – and let’s be real, the encouraging results of this cover should definitely open even more doors for where he can take his music over the years to follow and future to come.  He’s put together a truly endearing version of “My Way” that’s sure to gain the approval of the millions of people out there that still celebrate this timeless classic to this very day, and give them a new spin on a song they love.  Great move on the additional backing vocals as well – they add a perfectly angelic & graceful complement to the grounded sound & down-to-earth style of Spiros in the lead.  All-in-all, you certainly won’t find me complaining – Spiros Pagalis has put together a beautiful rendition here – check it out for yourself, let the man charm you with his vocals – have a listen to his cover of “My Way” below!