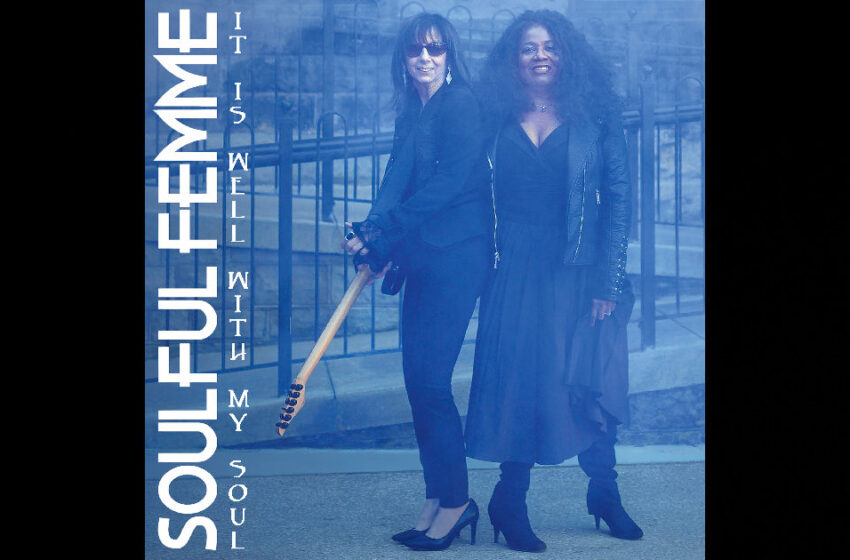 After everything I’ve been reading about this duo of talents and their combined love of the Blues, I gotta admit, hearing the mythical & mystical way this single “40 Under” from their new album It Is Well With My Soul started out with an unexpected, atmospherically inclined twist on their sound, I was somewhat sure was actually gonna end up taking us into Prog terrain at first.  And I suppose if we’re really splitting hairs, that’d still be a justifiable definition of the Soulful Femme sound on this particular cut, though it could be just one of many when it comes right down to it.  Give it a moment or two – you’ve got about a minute or so’s worth of intro & song building…and in no time at all after that, you’ll find yourselves right in the thick of a single that is definitely Blues without question.  That LIVELY & INVENTIVE type of Blues though, you dig?  Freakin’ great musicianship in this band…every time I get into the second minute of “40 Under” I’m just blown away by the precision & smarts of the drumming and how clever the timing & space is being used from the throne, how it interacts so brilliantly with the layers of music surrounding the beat, and in particular, with the live-wire vibes provided by award-winning guitarist Cheryl Rinovato and renowned Chicago-based talent/guest star guitarist Joanna Connor.  I have…no idea who does what exactly, but I know I like what I hear – and that still counts for something right?  There’s great punch in the bass-lines of this song too – you hear it all spark up with bold tones in the mix for your ears to enjoy as the song slides out of its intro gear & starts transitioning into the process of assembling the real nuts & bolts of the Blues/Rock sound of Soulful Femme to follow.  And that’s where “40 Under” really makes its mark; I appreciate a good ethereal intro the same as many of you do I’m sure – but there’s no doubt that what happens after that first minute of this single, is going to be what makes the biggest impact.  Good lord…the confident snap of the beat as this song really kicks in is worth the price of admission every time on its own – “40 Under” makes an incredible transition from its beginning to the main meat; all-around, it’s simply masterful musicianship that can’t be denied, guaranteed to keep ya entertained.

All this great stuff goin’ on, and we still haven’t introduced ya to the other half of Soulful Femme’s core duo, which is the sensational vocals that singer Stevee Wellons adds to their sound.  As the song began with its more Classic-Rock vibes for a moment, Stevee sounded like she’d fit right into a project like Ann & Nancy Wilson’s early experimentations in covering Zeppelin tunes as The Lovemongers.  As “40 Under” made its way through its many twists & turns, you hear Wellons continually rise to the challenge & opportunity, time and again, going from a fairly low-key gear at the start, to a riotous display of vocal fireworks by the end – Stevee covers a massive stretch of ground with her range and incredible capabilities.  She’s TOTALLY cheating though…because she’s a professional vocal coach and obviously a natural ass kicker in life outside of the band, so you know…if you’re singing along and you find you can’t quite keep up to her, take it with a grain of salt will ya?  Stevee knows her way around the microphone y’all – that’s what I’m tellin’ ya – but believe me when I say, she makes that crystal clear through the inspired performance she puts into “40 Under.”  She’s either right on-point with her lowest tones and bringing you in through the melody, or she’s dropping your jaw in amazement with her most intense moments – and perhaps what the COOLEST thing about Stevee really is, is that she could very well rock in either gear at any time, and every gear in between the poles of her extremes.  If you’re looking for the soul in the music of Soulful Femme – you’ll find it beaming right outta the microphone without question, while the instruments supply the real weight of the Blues you wanna hear, with all the remarkable highlights of real virtuosos.  If anything, it’s almost like Soulful Femme creates their own obstacles here in what are the same very advantages working in their favor – there’s SO MUCH amazing musicianship happening here, that you can easily get mesmerized by one instrument or aspect of “40 Under” and almost completely ignore the rest at the time, you feel me?  Don’t get me wrong, it gives ya a great reason to go back and repeat it again & again…I’d find myself hypnotized by the pure excellence from the drums at times and pretty much forget the rest of the WORLD existed around me on a few spins…then I’d go back & it would be the guitars Rinovato & Connor, or the vocals of Wellons that would end up playing the starring role.  It’s certainly nice to be as spoiled for choice like we are here when it comes to spectacular professionalism – “40 Under” is Blues/Rock done right, with charismatic style & serious finesse; it’s played with bold passion in every note & tone you’ll hear – it’s definitely a reason to look forward to the rest of their new album.  It Is Well With My Soul is out now – go get yourself some Soulful Femme; they’ve got the spirit, they’ve got the skills, they’ve got the sound, and they can’t help impress with the depth of talent you’ll find on a cut like “40 Under.”

Find out more about Soulful Femme at their official website:  https://www.soulfulfemme.com