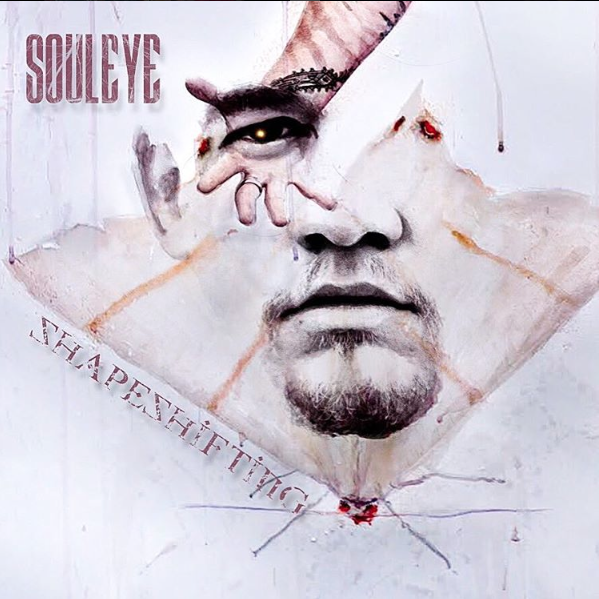 Always great to see this artist back in our midst…and to be quite honest with you all…I felt as if Souleye rolled-out the red carpet for us all right from the drop as Shapeshifting began; “Human Overwhelm” is about as audibly-inviting as I’ve ever heard accomplished as an opening to an album. Seriously…I know I’ve said it multiple-times, but it’s truly the magic like this within independent-music that makes me shake my head in disbelief that the mainstream hasn’t snatched-up talented artists like Souleye yet.

Talents like this absolutely cannot stay a secret forever. Souleye is more than impressive as he rhymes quickly, fluidly and smoothly through the positive messages and uplifting opening in “Human Overwhelm” as he relays a story of growing up from boy to man. Similarly in an evolutionary-sense, this feels like the most mature-side and focused that I can ever remember Souleye being right off the bat between this first-cut and the track to follow, “Labeled.” For those of you just joining us in the independent-grind…and just following along with these tales of future-superstars of tomorrow here at sleepingbagstudios…then you already know that IS saying a literal TON – Souleye has always been a reliable entertainer and flawless performer.

So to you Souleye…I ask…honestly, humbly and in complete earnest-innocence…were you THIS good before? I already feel three songs in after the intensity of the hooks and unstoppable delivery of Souleye ripping through “Labeled” and the cutting-edge electro-beat groove on “Magic Life” that Souleye has got me listening to the best of his best…which is ALWAYS awesome to hear an artist hit their creative-stride 10% harder than you remember they hit it last time…and that’s exactly what’s happening here on Souleye’s new record. Picking up assistance from the homies on “Magic Life,” the verses added in from the guests are absolutely sick! And they’d have to be – Souleye has been on-point and on his game from the moment the needle hit the turntables on Shapeshifting, setting the bar extremely high…sometimes you’d swear they were shifting his tempo up behind his back in the studio to trick us…but there’s no way – he’s really just that damn good. “Magic Life” thumps with a big-beat and huge anthem-feel to its massive chorus…the beats, the production, the performances…this is absolutely top-notch quality, right in your headset – turn it UP!

Because one of the most uplifting, energetic, vibrant tunes is just around the corner – “Starting Point” puts some of the best of this emcee right on display as he rips rhyme after rhyme and lets this story flow straight into the mic, out the speakers and into your ears. His lyricism is consistently among the sharpest and Souleye understands metering inside & out…he is right on beat and with the music every step of the way. The creativity in the vibes of the music throughout Shapeshifting is massively impressive…he’s seriously pulled out all the stops to deliver the goods like never before – my ears don’t lie to me, or to you – this is Souleye clearly at the top of his game.

Impressively weaving through “Rage-Free” – you get the majority of the origin-story behind the album’s title upon this innovative cut. Dialling-back the energy just a touch in order to bring out the message in the lyrics across that 10% more clearly…”Rage Free” opts for a more delicate & thoughtful touch applied to the music…and if anything…MAN does this set up “More Than Five!” What an unbelievable track! “More Than Five” delivers from every inch of your speakers as Souleye puts together one of the most impressive rhythms & grooves on the album with his lyrical-speed taking on Ferrari’s and McLaren’s off-the-line just for fun. If you have ANY doubt whether or not this cat belongs with the best of the best, you need listen no further than “More Than Five” – this track is a massive monster; I cannot hear or think of any reason why this shouldn’t be a HUGE HIT with rap fans – Souleye is an unstoppable freight-train…and that freight is a whole trainload’s-worth of dictionaries…he’s put more words into this song than the writer writing this review actually KNOWS how to use, speak, write or say out loud. Amazing. The beat is deadly…”More Than Five” is a huge winner for me on Shapeshifting and provides every set of ears listening with audible-proof of every reason why an artist as dedicated to his art and craft like this will go on to succeed.

With more of a nod to the old-school through the playful-vibe & atmosphere, hip-hop takes a turn towards a creative-atmosphere that is built of audio-rubber on “Word Won.” It’s honestly awesome to hear Souleye come out gunning each and every track as he has been on this album…to put it mildly, it’s freakin’ inspiring! “Word Won” shows him mix it up, bring in a little more of a theatrical and ‘entertainer’s’-element to the music…he’s right in the spotlight on this one, twisting the words all over the place…the guy is just ridiculously loaded with skill; I don’t even rap and he makes ME jealous! I wish I had talent like Souleye does for Hip-Hop…I’m telling ya, he’s better than ever on Shapeshifting, no lie.

Cause LISTEN yo! He seriously does NOT LET UP once on this album – he comes out with an extra bounce in his step to hit the beat on “Our Flight.” Every one of these beats has packed in an uplifting quality, feel or touch to the music…and “Our Flight” is no exception; lyrically, again – top of his game as he throws out words so quickly and clearly, it’s like it puts your brain on a seven-second delay as you catch up with everything he’s saying. Hook-wise, this track is massively-strong…multiple voices come in to lend a hand on the melody…and it’s a completely ‘winning’ combination in every sense of the word. “Our Flight” glides along as smoothly as a private jet.

I dig it when the guy digs right in and adds-in a little craziness & aggression like he does on “For Love” as it opens…it doesn’t make anything mean, it just sounds a little more ‘in the moment’ when he heads towards that extra-gear. If anything, “For Love” continually brightens up in mood, tone & atmosphere as it heads to its chorus and melody-line, strengthening the middle-parts…them chorus-things…you know…the other stuff that happens around the INCREDIBLE rap-verses that Souleye continually comes up with. Dude should seriously be proud of this album…this whole track-listing combined so far has become a massively-impressive achievement. “For Love” ramps-up huge by its ending, breaking out completely for a single-sweet piano-line, and then on into the grinding beat of “The Victim.”

The first single that we actually reviewed from the album about a month ago…I might be crazy…but it sounds like it’s changed just a slight amount… I’m willing to take that one on, it’s probably me…I listen to a heck of a lot of music, sometimes it’s hard to keep track of every note! Regardless, it’s a killer-cut and a great choice comparatively to the rest on Shapeshifting as the winning-candidate for the lead-single honour. Super-strong chorus to this song, check out my full-thoughts on the cut in our previous review here.

Wrapping it up by rapping it up once again, lighting-up the mic on “The Archer” – everyone’s got their head in the game on this final track – no surprise there…Souleye has put together an album full of precision work to be proud of – Shapeshifting is stunning from any angle you look at it. Taking the smooth-way out of the album, he flows like water over this final-cut…”The Archer” ends this album perfectly with Souleye remaining right in the spotlight…he’s put this album right up on his shoulders and carried it the entire way through. Tremendous effort – I would only hope this leads to the massive-payoff this talented emcee/song-writer truly deserves.

Find out more about Souleye at his official page at: http://www.souleye.net/