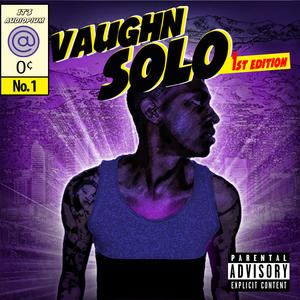 If this guy is gonna keep putting music out, Ima keep findin’ ways to get my hands on it and try to get my head around everything Solomon Vaughn is rapping about – just sayin!

We’ve just come out of reviewing one of his latest creations, Boonie Mayfield Presents: Solomon Vaughn…make sure to peep that if you haven’t already and discover the origin story behind WHY I’ve gotta keep following and tracking down this talented wordsmith. Knowing my history on him a little better now…we’re going to spend a bit more time on this representative for modern-day rap & hip-hop and get into the two follow-up albums this week, starting out with Vaughn Solo 1st Edition.

I’m a little bit better prepared this time. Now that I have somewhat a grip on his style, humour and wit…I’m much more ready for the ride that is assuredly going to take place on this album from Solomon Vaughn. Starting out with smart samples that feature clever dialogue that’s intriguing and hints at the journey we’re about to experience, “The Beginning” offers both wisdom and insight into the man also known as Boonie Mayfield. Breaking out of his past and into his present, “The Beginning” marks the divide between his time spent as a student before the mastery we’re about to potentially witness.

And had I not heard the last album…I’d probably question whether or not he’d be able to deliver. To not expect excellence from Solomon Vaughn at this point would almost be disrespectful. Incredible humour as well – this boy’s got jokes yo! If you’re not already laughing hysterically by the first verse of “No Handle Bars” and its reference to Boogie Nights then believe me, it won’t be long before he rips out a quick Chappelle-show anecdote or something right off the top of his own sharp wit – but he WILL get laughs out of you.

Now…”Good Girls” is one of those tunes that…may or may not be accepted by all the ladies out there. Between the lines, there’s a message here like all of Solomon’s work really…sometimes you just have to dig for it a little because whether serious or joking around, the dude delivers with a commitment to the words that makes the lines blur! When you realize a lot of the time the man speaks just as freely through his samples inserted into the music like at the beginning of “Good Girls” then it all becomes clearer. Subject matter aside – the way these verses are constructed is phenomenal and flawless – Vaughn drops the mic to pass it over to his homie Istayjammin and both take turns shredding the mic with sick verses that twist and bend to every beat they need to find.

Much like the album we’ve already reviewed from Solomon…it’d be hard to argue that he isn’t hitting full-stride right at track number four with “Pass The Offering.” This beat literally pumps iron right in front of your face as gets stronger and stronger with each repetition, building musical muscle and bringing the BEEF to the music! Really powerful music and once again, completely strong performances on the mic from Solomon in addition to the confident rhymes of Jordan Craft who helps add strength to various cuts on the album, including the following track “Remember When.” Displaying a softer, more reflective set of lyrics…this chilled-out beat still finds a way to fit in a ton of words with Craft delivering a tight verse quickly and efficiently, making the music almost feel like it’s going in reverse through comparison.

Ill University drops in to lend a hand on “That DOELEMITE!” and pimp this track out with a set of rhymes straight out of Shaft-meets-Huggy-Bear. Slick reference to Chappelle in this one and the infamous Rick James skit and a massive switch in the music about two-and-a-half in that breaks way for a wicked verse that is spit into the mic with pure style. Between this track and “The Vaughn Solo Killer Bee Itch!” you get some of the best doses of Solomon’s style of humour and how addicting it can ‘beeeeeeeeeeeeeeeeeeeeeee itttttttttcccchhhhhhhh.’ I gotta admit…I’m not usually too into anthem-songs where a band or artist uses a name as a hook, but there’s absolutely no denying this track’s ability to bring around a smile to my face. Amped-up to times-ten, Vaughn and the talented Giane loosen up the vibe on the album against the backing of a strong beat, literally busting into laughter at the end of this song and rightly so. It’s so overblown out of proportion that you can’t help but kind of sit back, look at it for what it is, and just admire it with a smile; I wouldn’t have thought it originally on my first spins through, but this track became incredibly addictive and very, very quickly.

But I’d be lying if I said the best wasn’t still to come, cause it is.

“My Love For…” is an excellent, short & sweet track that really outlines what Solomon is actually all about & here to accomplish as an emcee…or at least that’s what I’m getting out of it! It’s got a playful vibe in the music that makes the switch into “Elfman” all the more powerful. This might be the highlight in a lot of what I’ve heard from Solomon – it’s not a sound you could use to define a style entirely I suppose – but using these extra dynamics as an extra bullet in the chamber like this is pure mastery. I mean…I’m not even really speaking for myself I suppose…I’d happily listen to a full album made in a style like “Elfman.” These vocals are absolutely freakin golden…doesn’t matter who is on the mic, the moment they find that overdriven distortion, they light up the studio and the record equally and really ‘go for it’ like never before like they’re shouting into a megaphone direct into yo’ face yo!

Vaughn Solo 1st Edition takes a more serious turn through the following cuts “8-8-14 (The Summer Breakdown)” and “No More Of This Shame.” Literally and audibly fascinating through the lyrics – “8-8-14 (The Summer Breakdown)” might have some of the most insightful words to help you understand the man behind the rhymes. Much like myself it seems that our emcee here once used laughter as a prop as he built up his confidence and skills, just as I did when I first started to sing way back when before any confirmation or validation had remotely come my way. So I can relate to where he’s coming from – and I’m proud to see that he’s broken free from feeling like he needs to completely rely on jokes – he absolutely could with his sharp sense of humour…but there are many more dimensions to Solomon Vaughn…some of them very serious like “No More Shame.” I love the sample he’s used in this melancholy melody at the end…cause man, I really think we all feel this way sometimes as creators and musicians. And it’s really the voice in our own head, telling ourselves we can’t make it, that no one is listening, that we’re not good enough…more importantly, it’s completely 100% up to ourselves as individuals to tell ourselves to fuck off and go after our dreams with everything we’ve got anyway. “No More Shame;” there shouldn’t be any – Vaughn was meant to do this.

“Personal Sh*t” is another example of how deeply committed and what an emotional performance this microphone poet can conjure up. Becoming increasingly aggressive, Vaughn spits out venom like Eminem in this cut as he works through the personal demons agitating him. Jordan Craft makes an appearance once again with another noteworthy performance that matches Solomon’s energy and lyrical prowess bar-for-bar; that’s definitely another talented MC right there and Vaughn was smart to cut him into this album as a featured guest as much as he has.

With the exception of briefly hitting up the humour one more time with the best use of a reference to Adam Sandler’s Waterboy ever recorded on “Ode To Joy,” the shift to a more serious and thought-out clarity of direction is all over the last third of this album. As much as I like him laughing…Solomon Vaughn is at his best when sending out the message direct like he does through songs like the ones that end this album, “Dreams” and “The Ending.”

“Dreams” spells it all out nice & plain with Ill University once again dropping in to lead the way. Excellent attitude and lyrics to this track…and it leads perfectly into “The Ending” which makes fantastic use of samples from Tyrese Gibson. So…quite obviously, Solomon and I watch a lot of the same stuff, listen to a lot of the same music and are inspired by many of the same things it seems…if you haven’t checked out Gibson’s online videos, you should…they’re completely inspiring. Vaughn has used this purposely and it doesn’t go unnoticed…at least not to me. I hear the will and want of an artist who is ready to embrace the incredible skillset that he has and really push the limits of where he thought he may or may-not end up in life; Solomon Vaughn is an artist ready to take it all as far as he can go.

He’s definitely got me listening.

Find out more about Solomon Vaughn at his official page at: http://www.booniemayfield.com