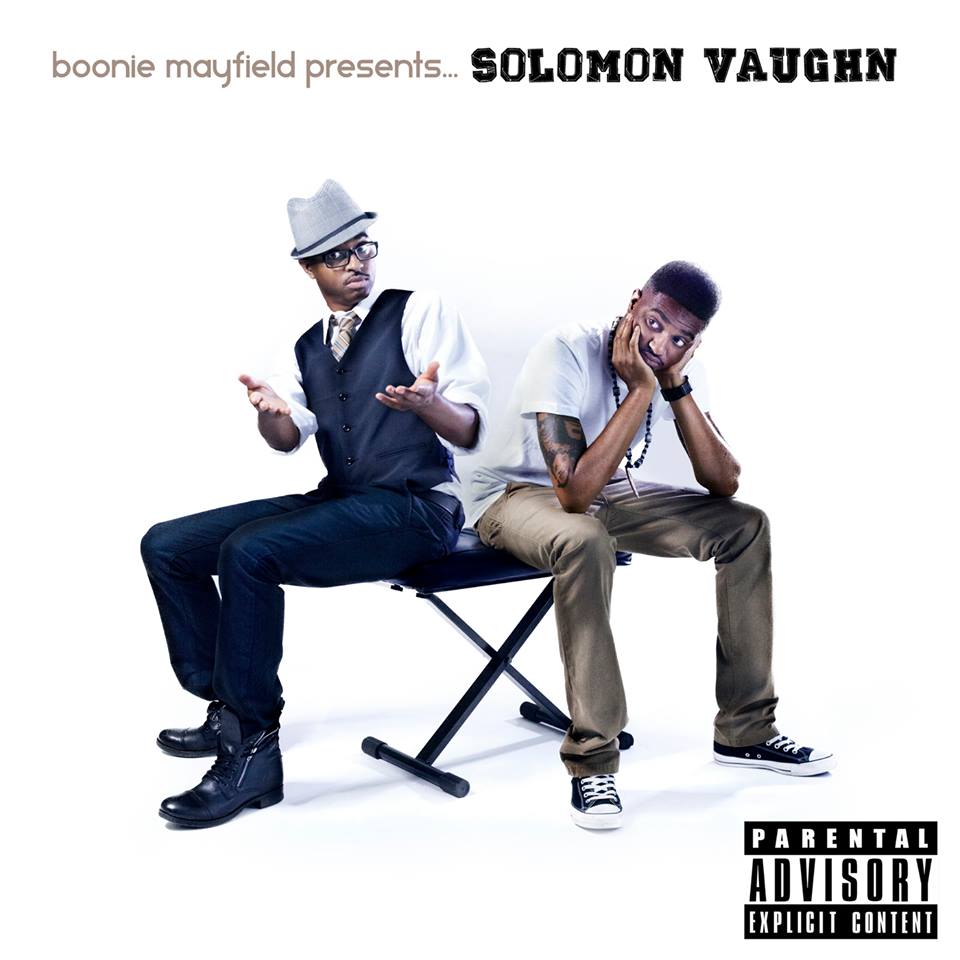 Big respect to an artist that can create and bring exciting ideas like this to life.

Right from the opening track on Boonie Mayfield Presents: Solomon Vaughn, “Brothafromanothamotha” there is a captivating element to the music that captures and holds interest instantly. It’s an excellent opening to a complete experience of mix & wonder through the mind & music of Solomon Vaughn on an album that celebrates collaboration, creativity and freedom in sound. “Brothafromanothamotha” features Shawn Keith on this spoken-word beginning that is as inspiring as it is serious.

Once “The Wonder Years” started out with its subtle-opening in the music, I was already ready to declare this entire album and artist as winners and hand out the blue-ribbon… I really dig the choices that Vaughn makes in the music; it’s hypnotic, rhythmic…but most importantly, completely PRESENT. Though he’ll take the mic himself in impressive displays like “The Wonder Years,” it’s also clear that this guy intensely understands production and makes the music an equally dynamic star. As “The Wonder Years” rips through its final minute all instrumental…if you’re listening close, this beat messes with your mind & ears in clever ways…like the musical-equivalent of the ‘Magic-Eye’ paintings where you see sailboats in pictures. Maybe that’s just me…

He definitely puts together tricky rhymes and bends words around in a style I’d have to say is pretty unique to himself – Solomon Vaughn is making some very smart decisions in his lyrics and assembly. “Driven (No Limits)” is a great example of his ability to flow cleverly & smoothly, quickly and trickily but also a fantastic example of assembly on the album and the song itself. A wickedly smart change-up in the music at the final minute into something completely different might make you question it at first…

…that is…until “Haterade” starts out. HUGE song and hit here from Solomon Vaughn…if he’s not taking this one out to single-town, I’m not sure what he’d be thinking. Seems like a smart guy…I’m sure he has to be able to recognize he’s got certified GOLD with the potential on “Haterade.” After the switch from “Driven (No Limits)” you go straight into the MASSIVE sound & mix on the beat for “Haterade,” recalling the feeling you might have gotten from big-beat hits like Kanye’s “Jesus Walks” or Jay-Z’s “99 Problems.” Different sounds and songs all three…but you get the idea – BIG BIG sounds on this cut.

Jordan Craft lends his talents to “Audiopium,” a song-title so brilliant I am absolutely shocked it’s still out there and I haven’t heard or thought of it myself…that’s an awesomely descriptive title. HOWEVER! As much as I like it…and I DO…it does unquestionably borrow some ideas you can also find on “The Pusher” by Ice-T from back in the day on his Power album…the ideas of substituting music for drugs & the more or less misunderstanding of it all between the dealer and the addict. You wouldn’t think a beard as crusty as mine would catch onto something like that perhaps…but I raised myself on Ice-T back in the day growing up. “Audiopium” is of course an update of the idea for the modern-day…and man, I gotta say it hits home smoothly as it matches energy and ideas to the music incredibly well once again.

I really appreciate what Solomon Vaughn has come up with on “Mile Hi” and I like everything about it right down to the placement of it on the album, the composition, the innovation…it’s tracks like this that unquestionably make me believe we’ve found a real leader in sound here with Solomon. For what we’ve heard so far…you won’t see this song coming – and if he continues on in this vein he’ll soon be called ‘The Radiohead Of Rap’ because this is pure-fucking genius. The vocalizations only last about a minute or two before fading away nearly entirely with the exception of a few words here & there as it drifts along hazily and beautifully, transitioning into the beyond. The bass-line, very familiar to me again, nearly recalls the line from “Make You Feel That Way” by Blackalicious…but different enough entirely as a song to be deemed more than acceptable and completely his own. It’s a large departure for the album…and a tremendous applause-worthy moment from Solomon Vaughn – “Mile Hi” showcases his courage to take chances and truly invent & innovate with his music.

Sharp social-commentary starts out “Blade Brown” and a smart-story ensues lyrically through this character that Solomon has created. “Blade Brown” represents the ego-driven, lady-huggin, money-rainin’ superstar that dominates pop-culture…it’s a smart track that many people might miss just by listening to the wild theatrics and hooks…I’d venture a smart guess that the inclusion of the social commentary that starts this song out would imply that “Blade Brown” isn’t someone that that the person of Solomon Vaughn necessarily identifies with so much as witnesses out there in our world daily.

Following another smart exit & switch in sound at the end of “Blade Brown,” the short-skit of “Boon Doc Who” is entirely un-skippable – completely worth it at only less than a minute of time but jam-packed with humor and honest-to-goodness soulful talent in a wickedly executed idea. As it switched into “On The One,” I felt the vibe switch into the old-school R&B rhythms and hip-hop sounds as we get an intro from Solomon direct as it starts out. Everything vocally from the opening hook, to the opening verse before the rap comes in…is a little shaky. After the high-level of quality on each and every track he’s put out on the album so far…I can’t help but think Solomon knows this. The rap is unbelievably well-performed and at an emotional peak…and really…I’m fine with the singing-part of the song as well, even as off-kilter as it is…it’s the actual shouting of ‘hit me on the one’ that makes this a questionable track in comparison to the rest. To me…you can audibly hear Solomon pulling back rather than going all-out…and I’m just not sure why that is. I feel like there’s something to “On The One” that I’m missing to connect all the dots and make it all make sense to me…

“TMnC” is another idea that’s completely full of fun & humour. The transition that happens so subtly to the lyrical hook by the end nearly made me piss my pants laughing…it’s completely awesome and I already know how much my wife is going to hate me when I start singing it around the house. But I wouldn’t dare quote any of the lyrics of the following cut “Everything (Superficial Lovers)” – cause then she’d kill me for sure. That being said…”Everything (Superficial Lovers)” is one of the most powerful sets of lyrics he’s put together on the album and its electrified beat really makes this pop & stand-out in every possible good way.

The double-set of “That Can-O-Dam (skit)” and “Can-O-Dam” featuring iLL University is related more by the lyrics, ideas and title as opposed to beat and style. Solomon does extremely well and sounds confident on these big-beat tracks; the juxtaposition of his chilled-out-but-precise style really works well in the space between these huge beats thumping the speakers. iLL University breaks out a massive verse full of skill and perfection weaving in and out of the pulse of music…this track is HOT. Kind of makes me need a cold 12oz. Can-O-Dam, know what I mean?

Really versatile songs on Boonie Mayfield Presents…smart in the sense that some of the most golden moments like “Foya” don’t last long, making you NEED to come back to them again and again. The ideas, long or short, are executed with a true professional’s touch…and again – Solomon’s not afraid to take chances and step completely outside the comfort-zone like he does on “Glad I Found You.” Now…in the most backhanded compliment I might hand out today…Solomon does a good job wandering around in the opening vocals…and he MIGHT have been able to pull this off on his own…but I don’t know if he could have ever done the incredible job that Giane Morris does on the verse & rest to follow. SERIOUSLY! Who IS this fantastic voice? I need more of her and that confident, powerful sound…that is some beautiful tone & flawless delivery right there…that’s exactly what that is.

Still raising it up and continuing on creatively, “Sloppy Seconds” is definitely another standout…it has a weird push/pull to the energy…like you’re fighting off being drunk and trying hard to maintain. Genius loose/tight combination that really sounds equal-parts hazy and BALLSY; I really can’t say enough about just what a fan I am about Vaughn’s ability to create music you won’t expect…the hooks come at your ears easily, but that’s just the gateway into your mind for it to digest the rest of what’s really going down on this excellent album. Another incredible switch in the music sets the stage for the final song…

Ending with “Closure” – it FEELS like Solomon Vaughn is saying goodbye to us in this epic-ending! Don’t LEAVE us dude – you just got here! It’s another truly smart decision for him to have gone out on his own for this final track, basically just himself and a piano with some added guitars and slight effects rounding out the sound. But at the end of this album…what you really get, is what got him here in the first place – Solomon’s lyrical ability and natural-born gift to captivate and pull you into his story. In a showcase of emotion in a completely personalized ending…this album has been impressive from front to back and proven to be better and better with every listen as you get deeper and deeper into the music and lyrics. Boonie Mayfield Presents: Solomon Vaughn is certainly not an album I’ll be likely to forget anytime soon and definitely a candidate to be loaded to my playlists on the regular – it’s complete entertainment.

Find out more from Solomon Vaughn, aka Boonie Mayfield at his official page: http://www.booniemayfield.com