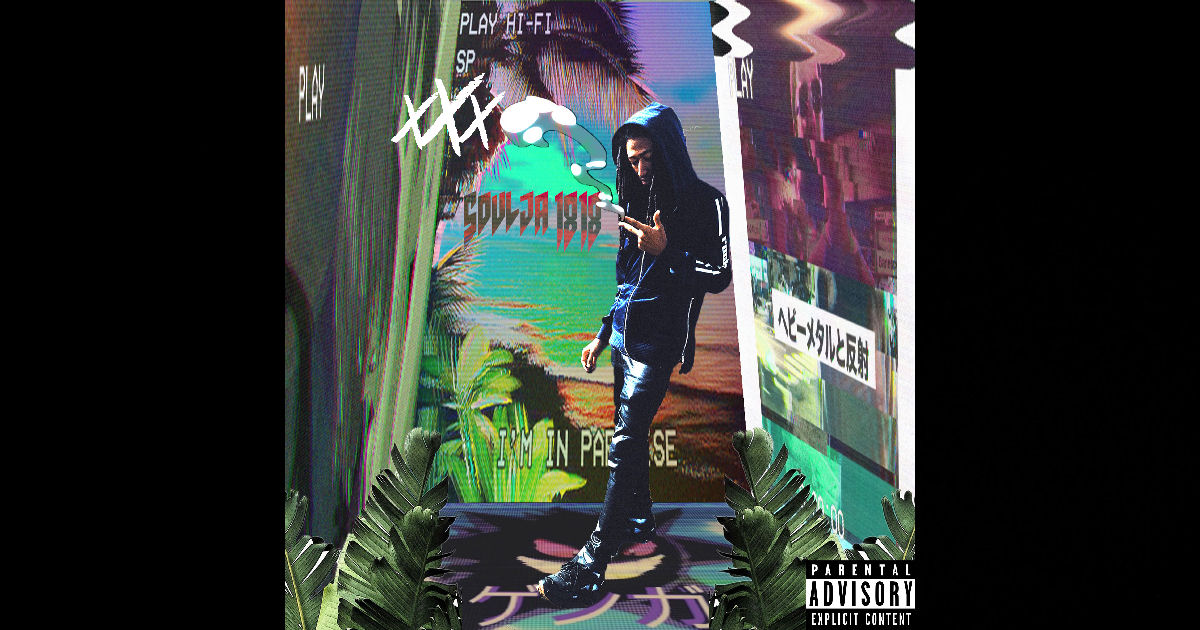 Working with some extremely large low-end here homies, no doubt about that.

As to whether or not the production needs a slight tune-up or whether it’s Spotify’s compression clippin’ past the threshold…hard to say for sure…but right now you can definitely hear that red-line pulsing away on the opening cut “AGO” from Solja’s new XXX EP.  Underneath all that, is an idea that works for sure.  I was actually digging on this right from the mysterious way it opens, right on into the killer beat that comes in to supply the vibe to ya soon after.  Solja’s keepin’ it loose, but entertaining all the same – he’s working with a double-edged sword held against him though…and it might be something he wants to examine heading on into the future.  What I mean is this…between the heavy effects applied to the vocals and the overshadowing of the gigantic low-end on the mix, Solja…brother-man…you’re gettin’ lost in the sound dude…and we need ya up front where ya belong.  Something closer to the mix you’ll find on “Die” to follow, which is the only reason I’m suspecting it might not all be on Spotify, given that this second cut seems to work out just as it should, with much more added clarity in the lefts and rights.  Anyhow…the point is…either one of those dynamics (low-end heavy/vocal-effects) can work hard against a singer or rapper without extreme caution…using both is almost always going to be a risk and a supreme challenge for those behind the studio boards.  The mix probably gets a bit away from Solja on “AGO,” but the idea itself doesn’t…that still comes across fairly well & I can see people diggin’ it.  I double-checked my end just to make sure with another couple records from another couple artists just so I could confirm it ain’t my speakers wild’n’out…all systems are go here, so I’m inclined to suggest a remix, keepin’ a close eye on that red-line and bringin’ it all in-line somehow.  No reason the whole track should end up on the cutting room floor, but it’s definitely gonna take some finesse to truly harness that low-end; bottom line is, like I’ve been saying, the ideas are there.  Between “AGO” and the rest of these cuts, no matter the condition you’ll find them in, they all add up to a solid dose of identity through the overall vibes & sound of what Solja’s creating…eventually the rest all catches up along the way; I ain’t sweatin’ the mix…he shouldn’t either – every artist should want a space to evolve as the years flow on.  If you listen to the way the percussion is programmed, the steady rhythmic flow from the m-i-c, and the smart atmospheric elements buried in the back…you can hear Solja’s got plenty to make moves with.

There’s still some room on “Die” as well to enhance this vibe mix-wise, but this is inarguably much, much closer to what I’d be going for if I was Solja.  While it doesn’t have the raging low-end aspect that “AGO” had to contend with, this one probably could stand to bring some of those background elements up, like the atmospheric/melodic sample driving the music, just to surround Solja’s vocals a lil’ bit more.  You see?  Us reviewers are all the same.  We want it one way, then we instantly want it the other.  On the real though, “Die” is closer to the solid mix that Solja deserves, and as a result, I think what he’s got goin’ on in the thick of this second cut on his XXX EP has a much better chance of connecting with the people out there.  In fact, I’ll do ya one better – I’d be willing to wager a bet that if you asked SOLJA what his favorite cut on this EP was after listening back, he’d probably pick this one as well.  His performances from track-to-track don’t seem to be an issue at all – he knows what he wants to do & he goes after it as he should, there’s no worries there that I can hear…it’s all about the mix y’all.  With the edge that “Die” has on the rest audibly, I have the feeling this cut might end up being the number-one choice for the people out there…as to whether or not idea-wise it should claim the throne from the rest of this set…I dunno…the jury’s out on that one.  There’s some really solid material in here, it just needs to find its way out of the dank & dirty and into some of that good-good clarity & clean stuff.  “Die” is a solid step in the right direction…now it’s all about taking this back to the lab, seeing what went down, why this worked out better than the rest mix-wise, & building on that experience the next time around.

In terms of the blown-out effect, “Speaking Japanese” suffers the hardest by quite a bit production-wise.  There’s BIG sound, and then there’s a mix that doesn’t quite hit the mark – we can try to make a case for one over the other, but there’s no disguising what’s real from those that know or listen closely.  So the question becomes…is this a fair representation of what Solja can do?  With a completely professional mix – what difference would there be?  And honestly…I think when it comes to these songs on XXX in particular, there’s a potential night & day difference to be dialed-in on & explored.  I have no doubt that these songs as they are right now, no matter how good any of the underlying material may be, are going to have a very tough time reaching the ears that Solja’s creativity deserves.  There’s more than enough people out there willing to blow smoke at artists/bands – that’s not a road I need to go down; I keep it real with the people I listen to & work with, because deep down, I know they wanna hustle up to be the best at what they do.  Honesty reigns supreme.  No good in laying down a bunch of insincere praise – sometimes truth is hard yo – if these songs need a remix…it’s gotta be said, because that’s what’s ultimately going to get the people listening & I’m positive that’s where Solja wants to get to eventually.  As far as verses & bars go, “Speaking Japanese” has a bunch of quality flow for sure…like I’ve been saying, that’s never an issue…once this guy has the mix down, he’s gonna be a force out there, 100%.

Title-track is probably my favorite of the bunch by a fair margin.  I like that Solja has flexed uniqueness in the face of adversity here…that’s always come through each of these songs, but perhaps never better than on the extremely complex design of “XXX” at the very end.  I mean, I’d imagine most artists out there would hear a beat like this and run screaming in the other direction, afraid of having to find their way into it somehow – but here we are, Solja went straight at this one and actually found something that really worked well, right where you’d assume it probably couldn’t even happen.  Like, if the whole beat isn’t in reverse somehow, then at the very least, some of those drum sounds are…not only does it give the whole cut a seriously trippy vibe, but it also ends up creating a genuine complexity that would be truly challenging…and like I said, Solja never seems to shy away from this challenge.  It’s tracks like this that confirm the man certainly has talent – he gets rhythm, he has a versatile flow, and he knows how to commit to his ideas…like I said, most artists wouldn’t even be able to get their head around a cut like “XXX.”  So props to that…pushing the boundaries creatively like this counts for a lot in my books; think of it like this – Solja could have played this final cut so much simpler if he felt so inclined, but he’s clearly choosing to flex, stretch, and challenge himself as an artist.  Exploration comes with all kinds of hits & misses along the way…but that’s what being an artist is really all about…having the courage to ‘go there’ – wherever that may be & wherever an idea, sound, or song might take you.  “XXX” proves that there’s a noteworthy amount of musical ingenuity at work, bubbling underneath the surface here & gives you a solid nod towards a future filled with unique rhythm & flow coming from Solja.  The kinks in the mix will iron themselves out over time & experience…I’ve got full confidence this dude will get it all to where he wants it to go & there’s plenty of time left in the long career ahead of him to make that magic happen.