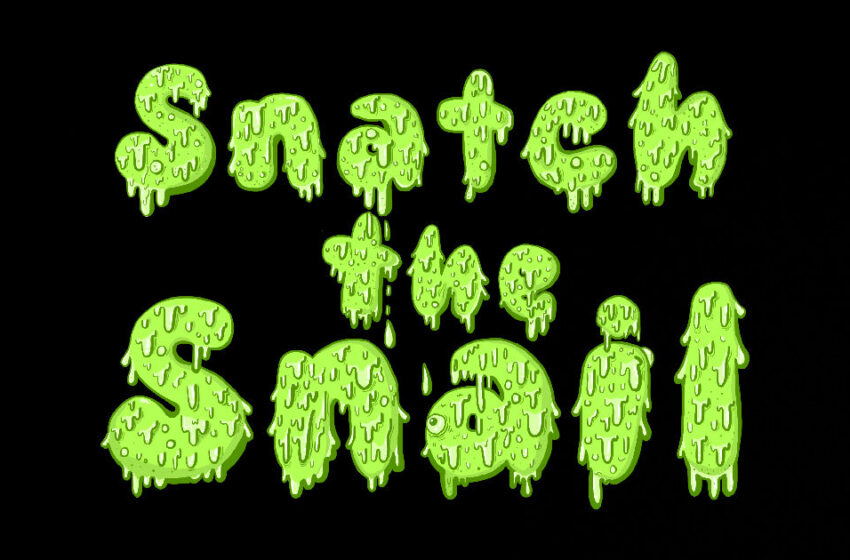 I ain’t gonna lie, Snatch The Snail is oddly addictive – and yes, I dig that.  I’m pretty well versed in the bizarre & strange side of the scene from the Alt/Punk crowd from Superchunk to Mudhoney, Golden Smog to NOFX, Rev. Horton Heat to Pavement, Green Jelly & beyond etc. etc. …and I gotta say, as many slight comparisons as you might find to certain bands or artists from the Psychedelic era, or to the  Punk/Hardcore/Surf-Sound heydays later on down the line…The Snail has still found solid ways to end up doin’ his own thing without being any kind of carbon copy at all.  Even genre-wise, he’d be a tough one to fully pin down, even though you’ll find that the classic & sarcastic attitude of real Punk remains 100% constant, no matter what kind of style you feel like you think he’s rockin’ with on whatever tune.

“She Doesn’t Even” was the track I hit up first of the three available singles online at the ol’ Snatch The Snail Spotify page – and it’ll give you a solid glimpse into the versatility inside this Punk-based style he’s rockin’ with, but without giving nearly half the tricks up this dude’s sleeve away that are still to come.  Of the three cuts, I’d probably tell ya that “She Doesn’t Even” likely has the most memorable hooks overall of the set, even though I’ll definitely make an argument on behalf of the other two tracks resonating a bit more with me personally, just by a slight margin though.  When it comes to this first cut, there’s no doubt that Snatch is creating a half-slacker/College/Alt-Rock style set of vibes in the way he approaches the verse – and while that certainly works for me, I can also acknowledge that it’s gonna be the chorus of this first tune that’s likely going to be what lasts longest in the minds of the masses out there listening to The Snail’s initial singles out there.  All I know is this for sure – I’m addicted to the guitars he’s got goin’ on in this tune…they add all the right punch, personality, and crunch into this track whenever it’s called for.  Snatch wanders around through an oddly playful atmosphere & smartly placed backing vocals as the verses roll on, and that amped-up spark to fuel the fire & melody of the chorus takes this first impression up to that next-level you wanna hear in a song as it progresses.  Excellent definition between each of the main parts in the music & design of The Snail’s songwriting here – and in the execution itself, you can hear that the dude’s an all-out fearless warrior.  You don’t make music like Snatch The Snail makes without knowing some people are gonna ‘get it’ and some ain’t – you accept that long before you even plug in I’m sure; but it’s in knowing that, you get artists like this guy that have absolutely nothing to lose and give you everything they’ve got as a result.  Maybe people are listening, maybe they’re not – maybe it matters to Snatch, and maybe it doesn’t – but what I can tell ya for certain is, no matter what, The Snail is still gonna be rockin’ & doin’ his thang, no matter how you feel, you dig?

If you had asked me earlier this week if I’d be givin’ a massive thumbs-up to a song called “Fuckboi” I probably would have chuckled at the very least.  Ain’t like it’s impossible in this wild independent music-scene of ours, however improbable it might seem – and here we are, that’s exactly what I’m doin.’  Snatch The Snail crushes this cut with enormous sound and serious venom in the lyricism, more direct & pointed at its targets than you’ll find these other two singles I’m reviewing here today will be.  “Scrub boy, I’m not a fan, you fuckin’ suck man” is just about one of the best lines I’ve heard in the last five years – I’m not even kidding.  Not only does it bring me blissfully right back to my high-school years where I was personally called a scrub by just about every jock on the football team at one point or another – but…I mean…look…I’m not advocating for this guy to win the fuckin’ Pulitizer Prize here – what I’m tellin’ ya is that, pound for pound, syllable for syllable, The Snail throws ALL the weight and attitude and genuine snarl he’s got into that line, and that’s exactly why it makes such a noticeable impact.  When it comes right down to it though, that’s the recipe in the mix for this entire savage cut overall – you can examine the music, or what’s coming from the microphone, and in either case, what Snatch has comin’ outta your speakers sounds absolutely deadly & ready to stomp you OUT.  I absolutely love that this guy brings serious commitment & confidence to what he does; a lot of people out there tend to mistake a sarcastic Punk attitude for some kind of laziness for some strange reason when it comes to the execution – but you won’t find that’s the case with Snatch The Snail whatsoever.  “Fuckboi” is pretty much bulletproof when it comes right down to it.  Sly, sexy, dangerous…this cut is all that & more – “Fuckboi” plays with a punishing design that hits every bit as hard as it was intended to.

“Less Cowbell” is a fuckin’ riot, purposely designed to be such.  Snatch is all attitude all the time, and there are gonna be so many people out there that are fuckin’ here for it, rightly so.  “Less Cowbell,” is of course, the direct antithesis of what The Snail is rockin’ here…not so much about the instrument, but the concept, and largely based on the reference to what we all know to be the legendary Will Ferrell SNL skit.  So think of it this way – “Less Cowbell” is like, almost slang for your neighbors telling you to turn your shit down…and from what I can gather, that’ll get you closer to what Snatch The Snail is on about here.  Of course, it’s in making this song to begin with that we understand quickly that Snatch likely doesn’t give one flying fuck about “noise complaints” or neighborhood sleeping hours – he’s literally created an anthem designed to be turned up LOUDER in defiance of people calling the cops on party time.  All of this is killer – and the energy is perfectly suited for the throw-down – bring on the police, because Snatch The Snail makes it more than apparent that’s the only way these amplifiers are getting unplugged, and handcuffs would be the only thing that would likely keep him from turning them right back on.  I think there’s potentially a case to be made that, mix-wise, sure, the other two cuts I’m hearing are a bit more on-point when it comes to the smoothness in the production – but when you’re taking on a song like “Less Cowbell,” you gotta also understand that, production plays a role in transmitting the overall vibes a songwriter’s looking to communicate too – as in, it can, and should be used to enhance what a song is really all about at its core.  To me, that’s the key – and it’s because of that, I’ve got no real issues with “Less Cowbell” coming out with a bit more of a raw, live-wire vibe to it – in fact, I’d argue it’s because of this directly that, we feel like we’re right there on the lawn while Snatch The Snail is kicking ass on this cut for the entire neighborhood to enjoy like it or not live from the living room, straight to your face-holes, just waiting for the cops to show up and try to ruin this good time like everyone else.  “I hate my neighbors, they hate me too” – that’s another line that resonated with yours truly typing all this out over here – I felt like Snatch The Snail was my own personal spirit animal when it came to the sentiment & lyrics of “Less Cowbell.”  I’m fucking old now, but my wife and I joke about it all the time – there’s pretty much never been a place we’ve ever lived in (and we’ve moved plenty!) that my neighbors didn’t end up hating the shit outta me by the end.  And much like Snatch The Snail, despite our inherently sarcastic ways, I’d imagine it’s not because the dude’s a straight-up asshole at all – it’s just because we like to play our music LOUD & PROUD because that’s the way it’s SUPPOSED to be!  Full-stop, end of sentence – you crank shit like “Less Cowbell” to the rafters – you shouldn’t experience it any other way other than to turn this up to that point where your neighbors don’t love ya no more.

Snatch The Snail, Snatch The Snail…what can I say?  Sure…some people are gonna get what this minstrel of mayhem is up to, and of course some won’t – that’s just the nature of anything that pushes against the boundaries & limitations of the mainstream…but if you’re asking me, attitude and passion make all the difference in the world when it’s undeniably authentic; that’s what makes The Snail’s music connect.

Find out more about Snatch The Snail at the official website at:  https://www.snatchthesnail.com