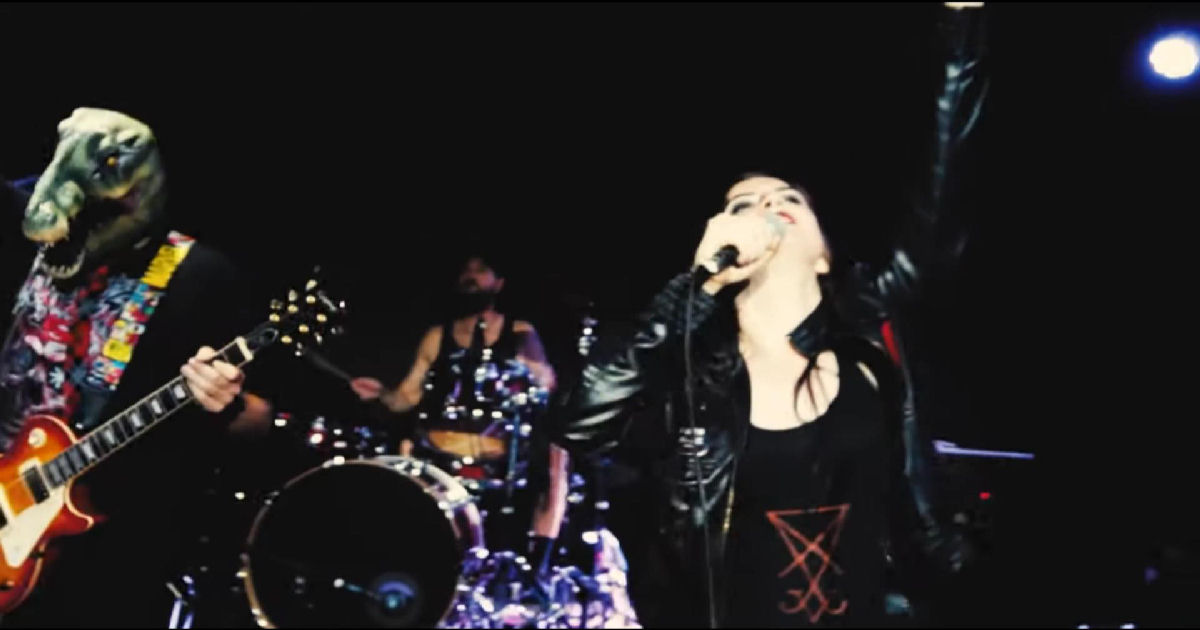 How’s about a lil’ “Sleeping Death” to wake you up & blast you outta bed this morning?

Y’all know me…if you’re into it, I usually am too, no matter the genre, no matter the style.  It doesn’t even take ten seconds into this new single/video from SiNSATiON to both see & hear just how much fun they’re seriously having in storming the studios & stages out there these days.  And how exactly does that end up entertaining you, you ask?  Ohhhh my dearest of metal/rock lovers…lemme count the ways.

To begin with, I have actually clocked out the first ten-seconds of this video in order to prove to you that SiNSATiON will immediately get your attention.  You’re gonna notice the slick, shiny, and wonderfully grimy guitars immediately…you’re gonna hear how the whole band instantly roars into place and “Sleeping Death” starts into its punishing pace with no intention of letting up for the rest of the ride…you’re gonna see a whole lot of HAIR flyin’ around…and also a…an ummm…uh…

…what in the all-hell exactly is that?  I was half-convinced they picked up a member of the band from Jurassic Park for a minute or two…we got a legit lizard of some sort or something up on stage here…

Boy was I wrong!  I must’ve just been trippin’ out.  I thought maybe I was starting to see lizard-people like the conspiracy theorists do all over the place.  Thankfully, a couple clicks down the road & a little research to make sure I wasn’t totally crazy, revealed that what we’re all seeing up there in this new video for “Sleeping Death,” is just good ol’ Sammygator kickin’ all the ass on the axe.  You know, just another typical Friday night in the life of SiNSATiON.  %^&@(&%^&$ Are you KIDDING ME?  That’s awesome!  This band has a freakin’ GATOR rocking onstage with them – how badass is that?

Fun nature fact that not many people actually know, gators are extraordinarily proficient with musical instruments.  You wouldn’t think so, given that we don’t end up seeing them jamming out that often in their natural habitat, but you put’em in front of an amplifier and an audience and I swear this is exactly what happens, every single time.  Take a look/listen and click on “Sleeping Death” by SiNSATiON below!

You’ll both see & hear this band is far beyond gimmicks, they’re just out to shock ya, make some metal-music with killer energy, and have some fun while they’re in the process – definitely ain’t nothing wrong with that.  Austin, Mike, Bill, Sammy, and Hannah take the stage by sheer sonic force – and it’s clear that’s where they’re right at home; ain’t no doubt that they pour on the excitement and amp-up the antics for this new video they’ve got goin’ on…I mean, it IS a single after all – you want a million reasons to watch & listen and SiNSATiON stocks this experience chockfull of’em for ya.  From the blood running down Hannah’s face, to the spider more than happy to have his lunch in front of us, and the band relentlessly making menace & mayhem roar to life from the lefts to the rights of the speakers & stage – you gotta admit, “Sleeping Death” by SiNSATiON makes a memorable impact on ya, one way or the other.  Scorching hot hooks, rock-solid vocals, music designed to stoke the fire in your summer, and a completely rad video to support SiNSATiON as they surge forward this year – it’s obvious to anyone listening & watching that this band is putting 100% of everything they got into everything they’re doing.

Plus…if I didn’t make it clear enough already…they have a freakin’ GATOR in their band yo!

Not many out there can say that.  Think about it.

Find out more about SiNSATiON at their official page at Facebook here:  https://www.facebook.com/psychoalligator