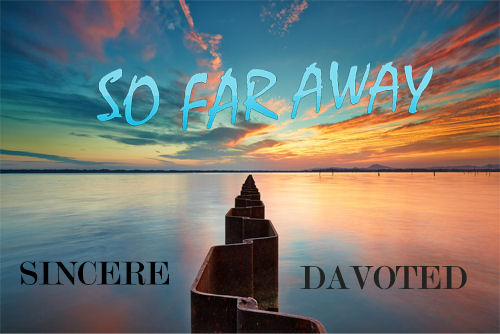 Pretty sure this collaborative effort between Sincere and Davoted works…seems to me that for the most part the idea they’re after is a mission-accomplished.  Their new single “So Far Away” has a few minor issues amongst massive ambition…there’s a bit of stuff I’d change but for the better-part of the length of this song, I feel like these two emcees find themselves on sturdy and solid ground here.  The beat that they’ve selected is 100% awesome and moves powerfully as “So Far Away” transitions through its different verses and hooks; the rapped rhymes and vocal-hooks are well-timed and written.

The issues are few…and in comparison to the enormity of the catchiness of the chorus-hook, any complaints pretty much fade away.  The track’s production is a little bit on the muddy-side…and I get that they’re looking for the big low-end swell to really have that huge impact with the bass-tones, but in the pursuit of that a lot of the brightness in this beat has been muted alongside it.  The vocals would stand-out more with additional treble added in here…it’s not just an issue of bringing them up in volume as it is just adjusting the mix slightly to bring out more depth to the sound overall.  Right now it’s all-sub, no tweeter…know what I mean?

It’s hard not to like what’s being done vocally here though…the verses are well written and flow perfectly.  There’s a few moments where I’d have wanted Sincere to put a bit more energy into the words so that we really get the emotion and passion in the lyrics right up-front & on display – but tone-wise, can’t argue that he’s right where he would want to be and sounds as he delivers in both verse and chorus.  But…for example’s sake…a slightly different energy or tone between the chorus and verse approach from Sincere would have probably paid off a bit more throughout the song; I think we get to hear a little bit more of this from Sincere towards the end of the song…but maybe still not enough for me.  Hey…I’m the first to tell ya, I’m musically-greedy and always want more…I can hear that it’s in Sincere to give…so it’s my job to encourage the guy to really cut loose and be less careful.  I get that he’s looking for that smoothness in tone…that chilled-vibe in the delivery…I’m just saying it can be achieved while still sounding like you’re really feeling those words too…and right now I’m convinced that he’s got a great hook but I’m not so sure he’s right into the moment enough to really bring it to the vibrant life it should truly have.  He does well and he holds his own on the verse, and the chorus melody itself is really provided by his vocal guidance…you gotta give him props for that.

Where it becomes a little bit tougher is when you get to the verse from Davoted…because that energy behind the words is tangible and noticeable by comparison to what we’ve heard in the song already.  A guest star is always a good thing…and I love collaborations…but you don’t want to be caught sounding less enthusiastic about the track than its initial star and Sincere walks a very fine-line on this cut in that aspect.  Passion can be communicated…even in the chilliest of vibes.  The ultimate collaborations always have either a truly bold & stark contrast to the talent involved or a matching energy that makes sense throughout the song…and again, I think Sincere plays this one a little bit on the risky side – OR…Davoted got the last crack at the bat in the recording studio and brought his A-game out without Sincere getting another chance to re-up.  Both emcees definitely have a proven ability with the words themselves as all the verses in “So Far Away” feature complexity in the lyricism and stay right on-time with the beat.

Overall, the idea of “So Far Away” and the writing take the spotlight on this one.  I think there’s a solid idea in here that just needs a slight remix to really draw-out the added spark this song needs, but the main thing is that the collaboration between these two will certainly work.  Sincere & Davoted have a potentially great thing started here…with a little bit of time and refinement, I think they’ll come out with some even better tunes, but this is undoubtedly a good start that clearly highlights the fact that they’re on the right path.

Find out more about Sincere through his official page at ReverbNation:  https://www.reverbnation.com/sinceremovement