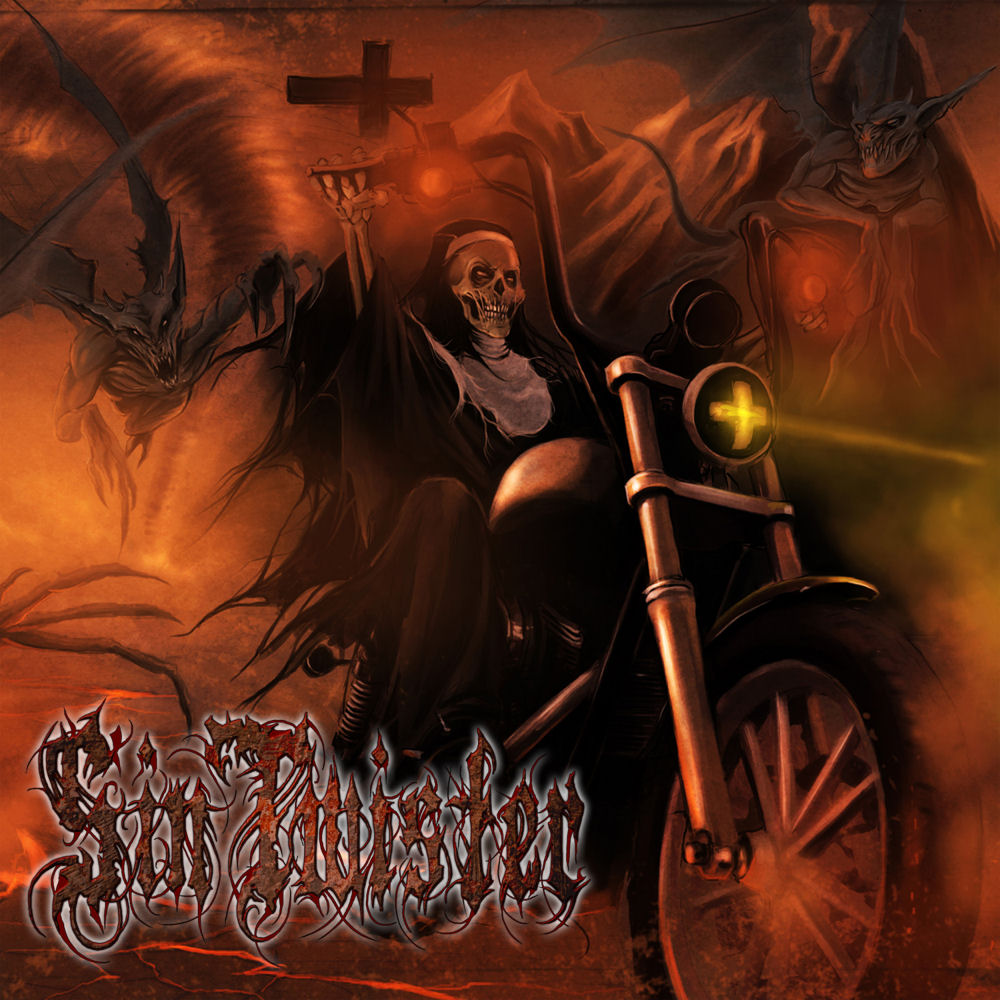 Yep – I can be the bigger man here…I can admit when I’m stumped. With as many traditional influences from rock & metal past can still be found prevalently all throughout this album – the sheer uniqueness of the vocals of Sin Twister are…not “throwing me off” necessarily, but adding something into this combination that really seems to have made this sound become unlike anything I really listen to!

And as you all know already – the “different” and the “unique” are two qualities we look for viciously, rather than push away back out of our comfort zones…

Now – as I’ve explained in several of my last reviews…my sensors have been way off the mark lately! So in a quick scan of the titles on this debut, self-titled album from Sin Twister, let’s just say I was convinced I was in for a repeat of Bon-Scott era AC/DC-style music. It’s definitely not like that! As much as I might like those classic tunes myself, it was more than pleasant to listen to the full Sin Twister album and feel like I’m hearing music based on the old-school, but trying something new.

Musically – you’re looking at some pretty hard stuff here. I’m thinking more along the lines of KMFDM…only turned a little down in the production. If there’s any beef whatsoever with this album, it’s definitely surrounding this particular issue…let me explain…

You can hear quite easily that this is BIG music. It’s meant to be loud and in your face. I’m listening to a song off the Sin Twister album right now that’s a perfect example of what I’m talking about here…it’s called “Happy.” Listen through the opening, and get yourself to the breakdowns and the solos. Now notice something awesome – the clarity of the instruments. Up until this point, much of this track – guitars, bass, drums…they’re all recorded at nearly the same volumes and frequencies…resulting in a somewhat muddy sound. Now – keep in mind, this particular track, “Happy” – is about as on the side of Alice In Chains that Sin Twister has gone to, and that band released the album DIRT – so a muddier sound might very well have been the intention here and throughout much of this album.

Something like “The Force Of Habit,” to me is a much better example of their sound separation, but even on this particular track, those guitars, drums and vocals absolutely bury the shit out of Isaac Hankinson’s bass whenever they get kickin. And of course anytime the vocals come out this in front of the music – that largeness of the music completely goes away – no matter what band you’re in. One of those most relentless questions plaguing Tool even to this day is the one of “How do you guys get such a big sound?” The answer to that question lies mostly within the production…that ability for the vocals to become more of an instrument being played along with the others also allows for a mix that is a little more in favor of the music as a whole, which can also take some of that pressure off the front-man!

ALL of this being said – the vocals are by far and away the most unique element of this band. There’s nothing wrong with ANY of the music really, you can hear it’s always well-played and tight to their style. While much of it is a lot like music you have heard in the past, Shaman Crowe’s vocals come into each song much less predictably, which is great! At any point, Crowe can switch between Layne Staley, Axl Rose and Bon Jovi; sprinkle in a little bit of Ozzy and Les Claypool, and serve. As a long standing fan of grunge…well, you could definitely understand which of those tones from Crowe I’m personally looking for each time – but there’s zero way to tell which way he’s going to go with each track – call me crazy, but that makes things a little more exciting for me from song to song. I like a band that can keep me guessing, or at least make me think – Sin Twister has managed to do both of these things quite well on this self-titled debut.

Definitely want to point out – Mark Lombard is an absolute beast on the guitar. It is ALMOST to the point where I would want to ask him if he is responsible for the mixing and mastering of the album – the guitars on ANY of these tracks are easily the brightest sound you’ll hear, up highest in the mix every time instrument-wise. Whenever he has the chance to grab a solo, he does; but better yet, Mark truly takes these moments for an excellent ride, fueled by superb skill. And they fit! Not only does he have a great sense of what to sound like in a solo moment, but he really fits those moments tightly into these songs. If you’re one of those people who just wants your verse/chorus/verse, believe it or not – these solos fit in so damn well you won’t feel like you’ve “left the track” to simply go on a guitar-solo adventure.

Jared Scheelar on the drums is damn near a machine himself. Quick beats that often use extremely well written, rhythmic parts and fills – it’s like this guy is always working out constantly back there, even in their slowest moments. “Heretic Sons” is a completely wicked example of what he’s capable of. In particular – this is a definite stand-out track for Sin Twister overall; excellent energy and an incredible beat.

Yeah…okay Sin Twister…at this point, I gotta come clean with ya…I just gotta ask ya straight up I think….

But…what….is the problem….with…..Isaac your bass player? Why do you guys HATE him so much?

Ha! Ok – just bugging you. I know you obviously don’t HATE your 4th member – but let’s be HONEST here Sin Twister – you’ve got him turned down SO FAR in every mix that there are moments where people straight up are going to think he’s left the stage or stopped recording for a moment! And from what I CAN hear, there’s no need for it. Isaac is more than holding his own back there – we just have to supremely struggle to hear his contributions to the songs. TURN HIM UP!

Overall – I think there’s some really good ideas here in Sin Twister that perhaps just aren’t getting the full respect in the mix to highlight just how good they might really be! But hey – we’re all indie here, so production and super-slick recordings aren’t going to be what come out of 99% of us to begin our careers…you can’t fault them for anything here production-wise – those are the pieces as indie bands and artists that we need to take with a grain of salt and understand that some of us have that access to every person and every instrument we’d need to make an album, but many don’t. And besides – it’s not nearly like the production makes any of these tracks unlistenable; far from it – they’re more than fine to listen to.

What IS important is that the ideas are there…that the pieces are there to be built upon, refined and continue to move forward. There’s nothing about Sin Twister that would make me believe this project doesn’t take this excellent group of starting blocks, examine this first album after a year, and come back to the studio with a completely different approach to what they’re doing.

Cause the pieces are all there – I can certainly hear that – and over time I think these guys all show the promise of being able to smooth out what are really small and understandable kinks in this debut and become even MORE solid from here in the future. I can dig what I hear now – but let’s just say I’m looking even more forward to where this band might go from here!