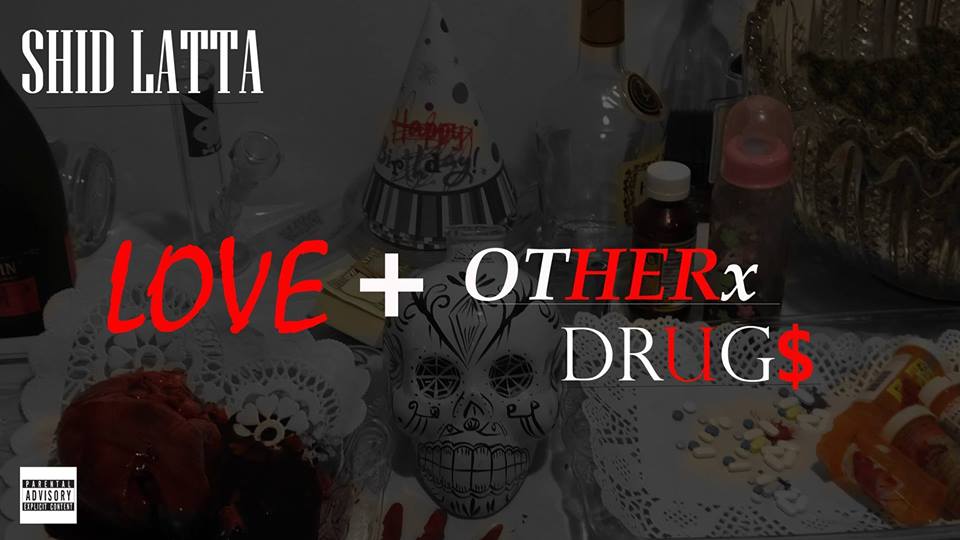 Here’s a production. LOVE + OTHERx DRUG$ isn’t just a brilliant title for an album, it’s a full-out mix of intensity in both rhyme and beat. Creative like a mixtape, this album THUMPS along through skits and high energy tracks that have all the hooks, style and delivery that’ll make you a believer.

Opening tracks “How It Is” and “Bet That” set the tone right from the drop of the first intro skit. Both of these tracks demonstrate the in-your-face flow of Shid Latta; this ain’t music for your mom. A flow and hook like you’ll find in “Bet That,” is right up my alley as far as the rap genre is concerned; this cut screams out dynamically and packs an incredible punch you can feel go right through you.

There’s a chilled out, confident toughness that Shid Latta displays all throughout LOVE + OTHERx DRUG$. Even in more laid back moments like “On Ice,” SL is still lyrically hitting as hard as he can. I mean, he’s getting it RIGHT – the tone fits the vibe of the track every time; lyrically he’s swinging for the fence and I really wouldn’t recommend getting in his way…

I can get by the modern-day phrases like “keeping it 100,” and “trill,” as long as they’re delivered with the menacing tone that you can find on Shid Latta’s album here. Yeah I know these kinda things keep it current, but often they sound placed and forced in to capture the youth; that’s not the case here. The pop-culture references fly by quickly, and clearly – you can hear the words come out precisely, they fit together perfectly in the meter and there’s no doubt in my mind that the work has been put in here to ensure these rap tracks came out just how they should.

Now….skits….you either love them, or you hate them….but ya kinda gotta appreciate them no matter what; that’s where I fall into this. I’m a music guy first and foremost – anything that breaks that up is simply getting in the way of my ears enjoying more music; BUT – I can appreciate its assistance in turning an album into an art form. And there’s NO reason that rappers can’t be included in the artistic side of album creation – there’s a ton of examples of skit-work within the genre, taking these albums from a mere collection of songs to a collective & unified concept.

While I can appreciate the menacing tone and dangerous feel of the music of Shid Latta, without those skits breaking it all up, it might come off almost too aggressive, so I think he’s made an incredible choice here by making LOVE + OTHERx DRUG$ in the layout he has. It makes songs like “Land Of The Lost” give you a second to digest after it comes to the final beat of its gripping tale and addictive beat…you get that time to reflect for a second and think ‘damn, that track was fuckin solid,’ as you move to a quick skit between songs.

All that being said, LOVE + OTHERx DRUG$ is an epic album in the sense that it clocks out with 30 tracks and total when all is said and done. Tracks in the middle stand out like “Scenario,” “Changed” and the wildly dynamic “You.” There’s excellent assembly and songwriting at work in behind the furiously-fast, crystal-clear and on-point lyrics stemming from Shid Latta delivering perfectly into the mic. The tracks on this album ALL sound huge, so it’s only fitting the album itself would be a monster in length and diversity.

I mean, HUGE shout out to anyone that intros a track with the Super Mario theme song like Shid’s done here on “1 Up.” Slowing it down with “Cali” right after, SL shows another level of his performance as he delivers some emotionally-intense rap-verse. Whether he’s talking about growing up, the future, or the fine herbs of life – you can’t deny there’s passion in his performance that clearly point to him putting everything he’s got into this.

He really doesn’t quit. From two thirds in with tracks like “Feeling” or the piano-driven playfulness of “Free,” to the R&B-meets-rap combo of “High,” – Shid Latta is putting together tracks that will keep you entertained and never bored. “High” is an exceptional track with a completely rad mix, unique from the album in sound and again showing another dimension to what SL brings to the table. With its spacious atmosphere and perfect sample, this track is a real highlight and definitely keeps the ears listening as it starts towards the end of LOVE + OTHERx DRUG$.

There’s an interesting take on “Tainted Love” that is really wicked. It’s normal to hear a cover of a song, but this is an excellent use of making the sample into something more. Let’s face it, as a song itself, “Tainted Love” was dated in sound…Marilyn Manson updated that sound…and in another evolution of the song, Shid Latta has tossed the original words but retained the essence of what made this track work so well…and then amped that up times-ten!

Final cuts “I Wan” and “Outchere” display the quick-wit, fast-rhyming intensity that have made Shid Latta memorable all the way through this album. With some excellent last hooks to end it all off, there’s a joy you can hear on this album underneath the menace; you can hear just how much fun SL is having making his music come to life through his vibrant storytelling. Definitely worth your time when you’re ready for rhymes.