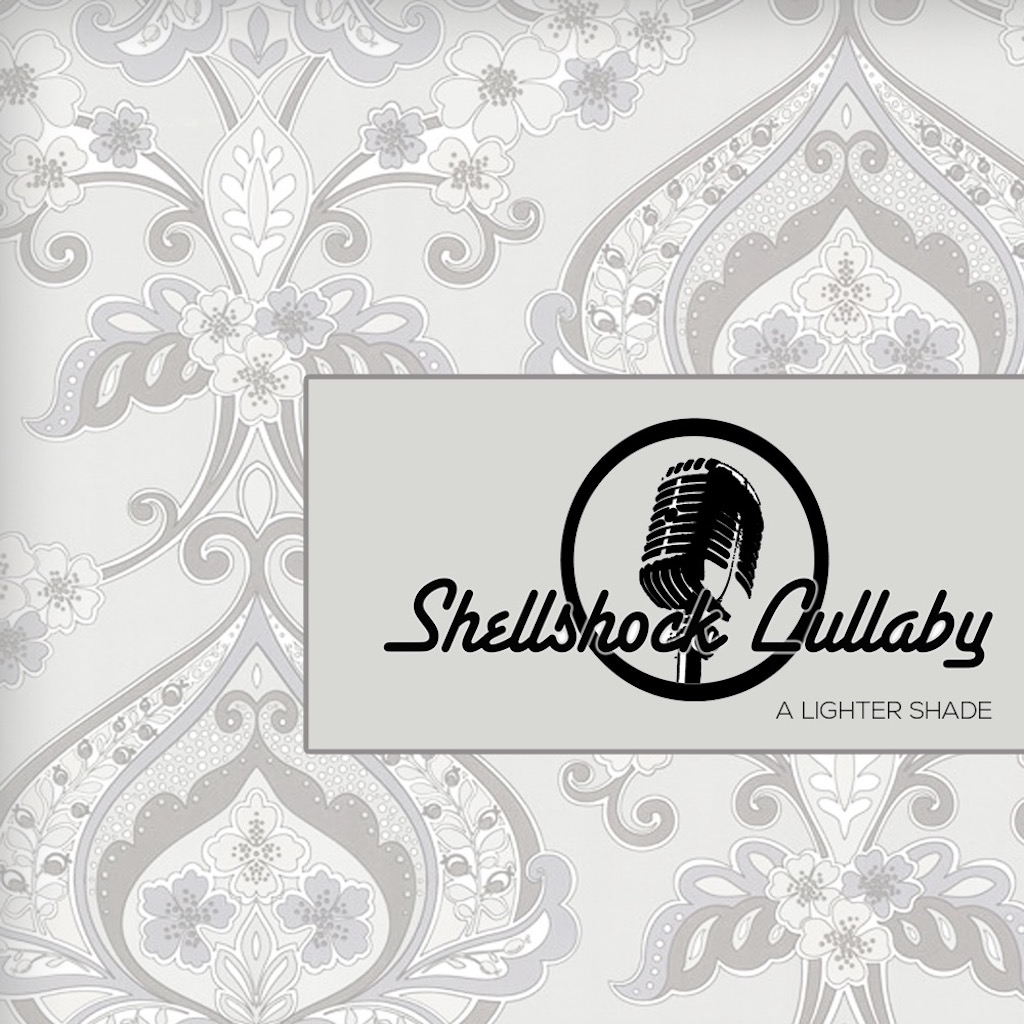 I was digging on the sounds of the background-vocals of Shellshock Lullaby even before the first song “I’ve Walked That Road” began to fully bloom.  Met with a sound that mixed the acoustic-vibes of tender indie moments like you’d find in the music of Superchunk mixed with the pop-melody inclinations in the writing of a band like All-American Rejects – Shellshock Lullaby combines emotional content with rhythmic-based material to form songs that play sincerely throughout A Lighter Shade.

A Lighter Shade.  I’d suppose the title comes from how typically you’d probably hear songs like these being blasted out of amplifiers at full volume rather than mic’ing the guitars in an acoustic setting – though with its emo-indie attitude, chances are there’s a whole multiple dimensions to the title that I just won’t get now cause I’m old & crusty.  It’s A Lighter Shade of the indie pop-punk emotional style…that’s my theory.  If these songs were amped-up & electrified…it might all move towards something closer to Blink 182 or Dashboard Confessional…something along those lines…and in that sense – I already think that the solo-artist at the helm of this project, Russ Nelson, has made a wise choice in how to set himself apart from the rest out there.  These songs translate wonderfully to the acoustic-sound…in fact it kind of takes the entire sound to a much more endearing and real place than I think they would have come out with by using distorted electric-guitars instead.  Russ is making good choices…throughout much of A Lighter Shade, I felt like I was definitely hearing a guy that was in full-control of the emotions he presented & put on the table through the eight new songs that line the album…you can hear that he’s put the work in.

“I’ve Walked That Road” starts out the record with bright energy, great guitars and harmonies – and it hits the perfect spot of clarity right as it breaks into its first chorus.  Not many can pull a moment like that off – so give good ol’ Russ some credit here – he’s effectively stripped most of the sound away at that moment and somehow still made the entire moment BIGGER.  As the chorus resurfaces later, it’s got all the other pieces in-place – but truly, that first moment had a ton of impact and instantly grabbed my attention to encourage me to listen to what else Russ might do along the way in Shellshock Lullaby.  It’s not just that it’s smart writing – it’s confident writing…and contrasting with the delicate and fragile nature of the vocals and lyrics; I thought “I’ve Walked That Road” was a great start.

Following it up with a song that’s been tried, tested & true to the Shellshock Lullaby catalog – “Backwards” resurfaces here as the second track on the album, having already experienced a life on a previous EP.  A solid inclusion – EP’s are meant to test the waters that way and prep us for the full-album to come…or at least that’s always been my opinion.  I think lately they’ve become much more their own free-standing entities…but I also think that a smart musician, artist or band will take their cues from an EP to go on and create a cohesive and great album to listen to, just like Russ has on A Lighter Shade.  Something like “Backwards” reminds me of bands like Marvelous 3 or All-American Rejects with the big-chorus and sing-along potential way-up high on the dial of this tune.  Great punch to the bass and drums…the acoustic guitars still shine and lead the way in the music as the vocals keep each part catchy and full of powerful hooks.

If anything, I thought that “The Look In Your Eyes” with its similarly-bright guitar tones was a little bit of a risk to have placed after “Backwards.”  It almost sounds like a solid continuation and twist to “Backwards” than it does its own song at the very beginning.  The ideas eventually do separate themselves, but tonally, it’s close between “Backwards” and the sound of “The Look In Your Eyes.”  I think it’s a good song…I like the way the chorus is sung in particular by expanding out that one note in each main-line of the hook – but I do think the potential impact of this song is lost a little through where it’s placed on this album.

Best thing I can say is…listen to the way that “All I Need” begins and you’ll be more likely to appreciate where I’m coming from.  I’m not saying each and every song in the world even needs to be all that different than the last one I’ve heard – I’m just saying song-placement on a record is a tricky & fickle thing that can often take a good song like “The Look In Your Eyes” and make something more average out of it just by what we might compare it to in the songs that surround it.  Sometimes there’s no possible way to help it…and I know after listening to this record that it would have been a struggle to figure out that final lineup – all of these tunes have strength.  By contrast – once we snap out of the “Backwards”/”The Look In Your Eyes” sound into “All I Need” – that impact is once again an immediate one we respond to as listeners.  I thought “All I Need” was one of the strongest tunes on this entire record…but at first I thought it might just be simply because of how different it sounded in comparison to the rest of what I’ve heard – but no…it’s just a really damn good song with a great performance from Russ in the vocal-department.  I love the added passion and emotion you can hear him push into the words of this song…thought he did a spectacular job of rising to the occasion when the music & lyrics of “All I Need” asked for it.

Although I wasn’t completely sure that the following two cuts worked for me 100% – I do think that both “Waiting For A Lie” and “Crimson Sky” show that Russ is thinking towards the future of this project and where he can potentially take the sound along with what he can add to it personally.  I really liked the indie-rock start to “Waiting For A Lie” and how the music moved throughout the instrumental sections and wove itself into the verse.  On this particular cut, it felt like the chorus felt well enough – but it also sounded a little bit like relying on what works comfortably without really reaching for the extraordinary – which I really think the writing in the verse of “Waiting For A Lie” deserved to have.  So I was a bit mixed on that one…I thought Russ sounded great with the harmonies in the verse as well, but the verse is what kept me interested overall in “Waiting For A Lie.”  “Crimson Sky” was another bold contrast of sound on A Lighter Shade – and I liked hearing that from Shellshock Lullaby again.  As it headed towards the chorus…I wasn’t completely sold on a few of the choices made in the guitar chords here.  “Crimson Sky” has music that’s changed a lot…but it felt like Russ needed to make more of an effort here to bend towards the tones of the music rather than lead naturally with his own.  That being said…I also think there’s a lot of good that happens in “Crimson Sky” – and some of this song matches Nelson’s natural-tones perfectly as well – it has moments of great success and solid guitar-ideas along the way.  Experimenting with the programming as well…you even get a bit of an electro-beat to help drive “Crimson Sky” forward…which is again, an avenue I think would be worth for him to explore in the future even if I don’t think it fully worked on this particular track.

There’s nothing wrong with keeping it tight, right & simple if that’s what the idea calls for either…and I think Shellshock Lullaby makes a solid turn back towards what really works well on “Without Serendipity.”  Easily one of the most powerful and strong melodies that you’ll find on A Lighter Shade – Russ nails this one thoroughly – “Without Serendipity” is a perfect storm of emotions presented & played like it’s in the calm-eye of that storm.  Really like the energy in this tune and its melancholy-vein that runs deep throughout the mood, tones and atmosphere as it builds.  Russ keeps it contained with bass, guitars, hand-claps and slight percussion guiding his voice along…and he puts all the right energy into his vocals on this one.  Loved the way they often overlapped…it’s not just good writing, but also a great recording technique that allows him to get the very best out of his voice – and I really think he did on “Without Serendipity” – definitely a real highlight for me on this record.

The album’s most ambitious tune, and its final-song “Shades Of Grey” puts the guitars down in favor of a piano-led melody.  With synth-strings, percussion and assisting backing vocals – I think Russ has written a solid final tune that gathers its strength as it builds towards the end and final moments.  I don’t think that “Shades Of Grey” particularly has any real defined hooks for the average person to really grab onto – but I do think it’s one of those songs that you hear on a record that you know will potentially outlast the rest of what you’ve heard along the way.  We all have favorite songs on a record that would never end up on the radio – that’s nothing new and it certainly doesn’t make “Shades Of Grey” any less of a winner than it is.  You can hear that a song like this is busting Russ out of his shell a bit…and I think with a little bit of encouragement and experimentation – ideas like what he’s got on “Shades Of Grey” will become even stronger over time.  As it stands – I think he’s got himself a powerful final tune that speaks to his own versatility as an artist and some of his more progressive ideas on where to take his sound & style.

Overall…I don’t feel like I can really complain!  I think Russ Nelson has put out a solid record here with A Lighter Shade and has something really great started here in Shellshock Lullaby.  Definitely seems like a thoughtful songwriter who has a lot of passion, enthusiasm & heart when he plays – and I dig that 100%.

Find out more from the Shellshock Lullaby official homepage at:  http://www.sslofficial.com/