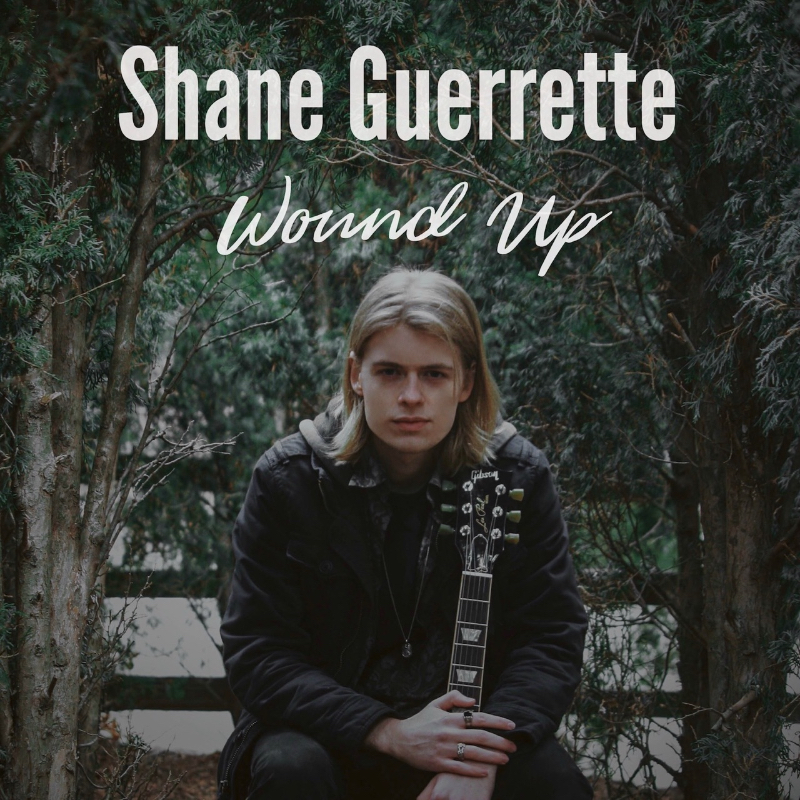 Well the jokes on YOU Shane Guerrette – I live, thrive & survive off of songs produced/recorded in bedrooms across the globe!  Finding out that the new single “Wound Up” was made in that familiar DIY-style we know & love at sleepingbagstudios only made me more intrigued and excited to hear what might come out from the speakers when pushing play on Shane’s latest song.  Anyone that knows anything at all about music these days is certainly aware that the quality of a bedroom recording sure ain’t like it was way back in the day – a lot of what you’ll find now is every bit as good as what you’ll hear in a studio recording if you get it all just right.  Regardless of how it may/may-not end up – I’m a firm believer that the quality of songwriting still comes shining through whenever you truly listen; no matter if it’s a shifty-mix in a live-setting or getting a song out there into the world by any means you can without access to 1/100th of the fun toys and talents of a studio…I still think talent, creativity and authenticity is something that comes through in ways that you can hear it…if you’re really listening…

According to his biography on social-media – Shane’s actually only 19 years old.

I just adjusted the spectacles on my aging face to make sure I got that last detail correct…I did.  So…that then means that the meaty-riffs we hear on “Wound Up” and voice well-beyond its years comes from someone not even into their 20’s yet?  That’s ummm…a decent start kid…*cough cough!

Ain’t nothing kid left about Shane Guerrette…in fact, I’d go as far as to say this guy is the MAN.  Truthfully – he’s actually been the MAN for quite some time already if you have a look at YouTube…you’ll find all kinds of songs there with impressive covers ranging from bands like The Neighbourhood to artists like Chris Isaak, Lana Del Ray and many, many more.  Bottom line is I’ve got a ton of respect for an artist like Shane that’s still so young himself yet so well-versed in what’s happening both in music today and throughout its history.  Because as much as I’m loving his cover of “Sweater Weather” – it was “Wound Up” I was really here to check out today…and in that song you can hear not only his own authentic style/sound but you’ll hear a brilliant combination of influences from throughout music’s history resulting in a seriously wild-ride of a listen.

And again…as far as ‘bedroom recordings’ go Shane…believe me when I say brother, I’d listen to “Wound Up” all damn day.  What’s a studio going to do for this track that he hasn’t already done here?  Someone please explain that to me…because I doubt I’d change a freakin’ thing about this song.  Guitars, bass, drums all come through impressively clear in the mix and the vocals are outstanding; I can hear that maybe it’s a bit on the ‘lo-fi’ edge of the musical-map…but at the same time…if you’re really listening to the style & sound he’s going for…well…doesn’t that style of production happen to like…you know…REALLY suit this song?  I fail to understand what anyone else would want and have to believe that Shane felt the same way, resulting with him having the confidence to release this bedroom-cut into existence and for plenty of good reasons.

You could start with the guitars…half of the hooks in this song belong to those guitars!  Great tone in the sound, fantastic amount of character and attitude in the way Shane plays…he’s precise, professional and MAN this guy can shred out a seriously skillful and appropriate solo!  Alright…even I think that sounds strange…’appropriate solo…’ – what I’m saying is that he found the perfect blend of tones, energy and approach to fit the song with massively entertaining instrumentation to surround the ol’ verse & chorus.  Reliably, the bass & drums keep the rhythm & groove in-check and overall the song itself is written with insightful amounts of movement, transitions and well-written parts that sound equal-parts ‘throwback’ as they do in-step with what people are looking for today.  Or another way to put it is that Shane isn’t just going for a tiny slice of the audience…he could take the whole pie!  He’s got a sound that could genuinely appeal to people of all ages that are fans of multiple genres & styles…what he’s done on “Wound Up” is what you call ‘accessible to all.’  At the very least, accessible to all that dig anything rock-related…but I have the feeling after checking out his channel at YouTube that this guy will be able to pull people in from all angles with the range of ideas, styles and sounds he takes on.

Most impressively perhaps are the vocals and the instincts that he’s got working for him, leading to spectacular results and a completely authentic presence on the mic.  “Wound Up” in a sense, almost leans towards the psych-rock era for the backbone of its idea…and notably, that would have all taken place long before Shane Guerrette even held a guitar or began to walk the earth.  The connection you can hear that he has to that golden-age of music is audible – he’s hasn’t just performed this song perfectly, he’s felt every moment and shared the experience with all of us.  I think the tone of his voice is spot-on to where it should be and both the verse and chorus came out just as strong stylistically as it did in the way it powerfully took over this rhythm & groove.  “Wound Up” would have made for a great instrumental tune – but with what Shane brings to the vocals, you’d never want to hear it without’em.

As far as my ears can tell…this guy’s got a seriously bright future – I’m more than stoked on what he’s done with “Wound Up” and I wouldn’t change a single thing about it.  A clearly committed artist that is dedicating himself truly to his craft & career as a musician – Shane Guerrette is going to get better and better and better…mark my words.  He’s already starting on cool, confident and solid ground, producing a song out of his bedroom that most people would kill to write just once in their lifetime…you gotta like the odds on this guy going the distance – place your bets on Shane, he’s got what it takes, I guarantee it.

Find out more about Shane Guerrette at his official pages below!