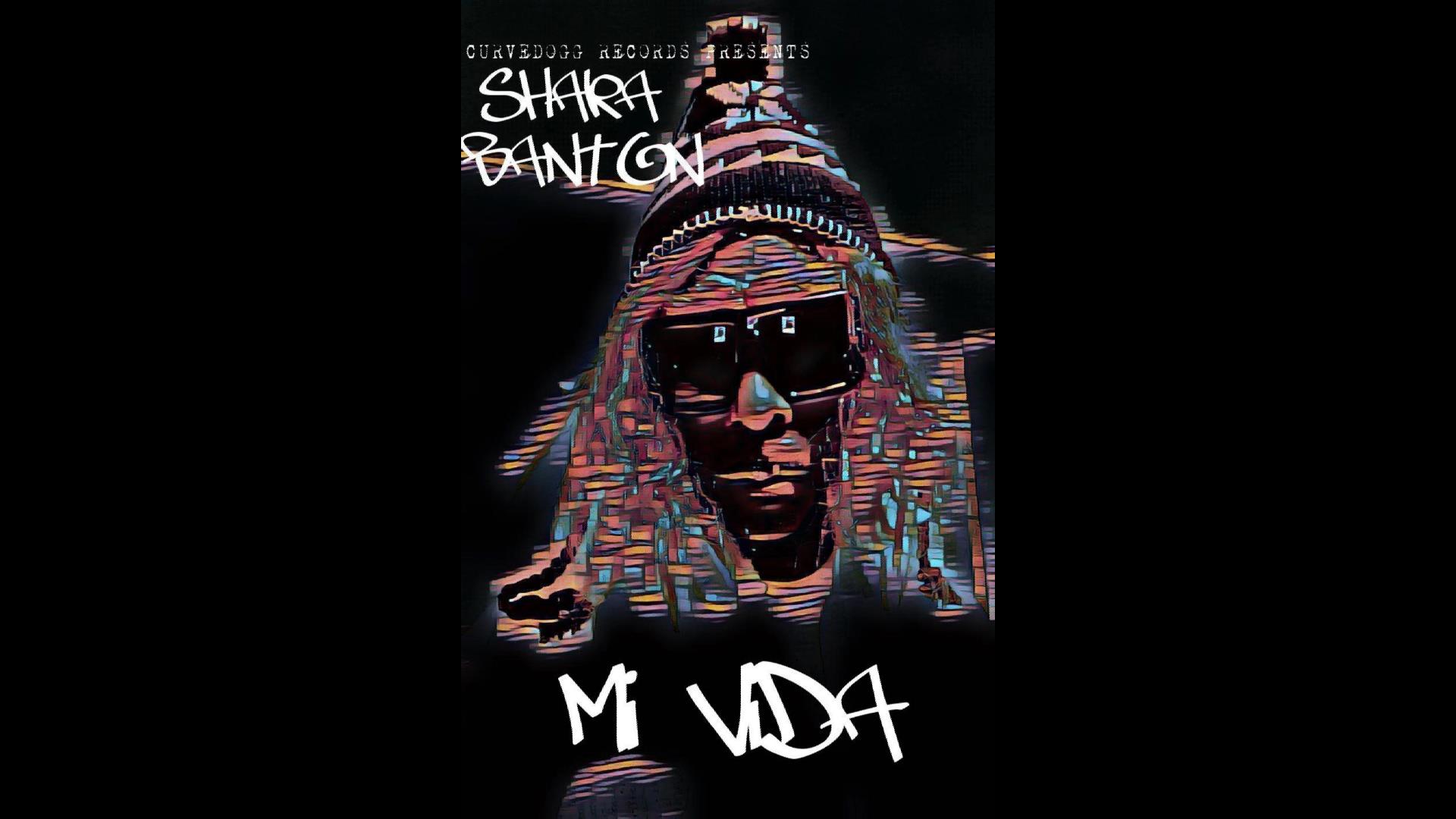 Interesting.  It’s definitely not like rapper/trapper Shaka Banton doesn’t know where the beat is in the bars of the music he’s rhyming to…he does…but he makes…hmm…interesting choices on the mic that others wouldn’t; and for those of you that have tried to go left instead of right before, you know that it can be a tough thing to sell people on a new sound, direction or path they’re unfamiliar with.  It’s the kind of chance you take as an artist that can either build you a dedicated following or end up changing your approach…Shaka’s choices on the mic could ultimately lead him to success if he plays it all right.

Through the set of tunes on his new Mi Vida EP, you can hear where the strengths are and where there’s still room to improve.  From what I can see…this looks like it could be the debut record…but there’s also mention of an album called Lyrics To Die For out there somewhere too – it’s not Shaka’s first time out perhaps, but he’s still fairly fresh & new on the scene when it comes right down to it.  He keeps it confident over these five tracks though…if it came down to that alone, you’d certainly suspect the man was a veteran of the music-scene and had been for years.

After a quick “Intro” into Mi Vida, the storm subsides and “Stripper Girl” becomes the first track you hear.  So…things I like…love the scream sample and the overall mix on the tune, like the vocal tones, energy and effects applied…all that works.  As far as flow goes…like I mentioned earlier on, it’s not like Shaka doesn’t know where the bars & beats are and where to add the punch to which syllables as he spits his lyrics into the mic…he does…but in an oddly jarring way, having less of a rhyme-scheme to adhere to in the writing and melody almost leads this one astray.  Now…I’d be the last person out there that would tell you that every second word or sentence needs to rhyme in a song, that’s not something I believe at all – but arguably, sometimes it really helps.  Trap has largely changed a lot of that…given the rhythmic approach it tends to add to the vocal-flow, a lot of rhymes begin & end with the same word…and you either dig that or you don’t, that’s all there is to it.  “Stripper Girl” has a bit of that I suppose in the chorus…but it was the verses that threw me more than anything else; they almost come out like they’re written as free-flowing thoughts or spoken word, not really designed to necessarily rhyme all the way through.  The hooks themselves are alright…not sure if they’re powerful enough to get by the semi-awkward lyrical-flow of the way Shaka raps “Stripper Girl” for everyone, but there’s still enough skill here to tell the man has the capabilities to make it work.  Take the second verse for instance – I think you get a much better snapshot of what Shaka can do, even though making the words rhyme is still far from the first priority.  The first verse…I mean…you listen for yourselves of course and make your own minds up…but it’s almost poetic in an odd way isn’t it?  Seems like “Stripper Girl” would be a weird time to go the poetic route…but that’s kind of how these words flow & come across in their structure and through his performance.

“Haterzz” has a really clever beginning if you’re familiar with the movie The Warriors…I wonder how many people out there will pick up on that reference?  “Haterzz” is a better example of a consistent word driving the rhyme-scheme through the verse…it comes across as a rhythmic success, which is fine if that’s what you’re going for.  If you’re not though…and you’re trying to really say something…then I’m not nearly as sure about a song like “Haterzz” whereby so much time is spent in repetition that you’re kind of left to wonder why more time wouldn’t be put into saying something different instead of the same things, know what I mean?  That all being said, by comparison to “Stripper Girl” – I think the hooks are much stronger here.  Perfect example of not being able to have it both ways however; this time I wasn’t so sure about the lyrics/rhyme-scheme of the hooks in the chorus.  I think as far as the actual flow of the melody and delivery goes, Shaka’s much, much stronger here in the hooks of the chorus and sounds great.  The verse…I could probably take or leave…I swear I’m not just another one of the “Haterzz” out there…I just feel like Shaka’s shown us more potential for the future than he’s currently delivering right now.  Musically, I dig some of these ideas…it’s fairly minimalist in style, which allows the big & burly personality of Shaka Banton to come at you in full-force…and I like that a lot, it’s on his shoulders more or less to make the entire rhythm & beat spring to life…and I just think he’s got more to say ultimately than he’s letting us in on through the repetitive nature of the lyricism on “Haterzz.”

Where I think things really start to work in favor of Shaka’s style & approach is on “Daddy.”  Mind you…harder to connect to the lyrics maybe…but I hear the man, I get what he’s rappin’ about here.  Bottom line is the rhythmic repetition works as a strength in this tune, largely due to the confident approach that Shaka takes to the main hook, he sounds right upfront in the mix and in full control.  Where things get even better in my opinion, is that addition of a bit of soul and R&B from Shaka, singing it out loud & proud at times throughout “Daddy” – he sounds great and I’d certainly encourage him to keep exploring combinations like this.  Everything from his own performance & range of ideas to the focus in the lyrics and the beat itself…it all seems to have risen to the next-level on “Daddy” and Banton gives a supercharged, captivating & charismatic flow that works strongly in each and every part.  Lyrically, as I mentioned…some people will connect to what he’s saying more than others…as for me, I already got three dads and I generally still feel like I came out in the minus in that department.  I know I don’t need another “Daddy” personally – but you might!  Regardless of whether you do or you don’t…this jam from Mi Vida comes out solid & smooth and I’m sure your ears will agree it’s the most dynamic & versatile cut of the entire set on this record.

Alright…so…at risk of sounding like one of the “Haterzz” out there, I’ll say this in closing as I listen to “Let’em Talk” here at the end of this EP.  What these two songs have in common…is certainly the focus that Shaka’s placing in the words of others…and I think that focus needs to shift from their words to his own.  “Let’em Talk” for sure – because honestly, who gives a shit what I or anyone else has to say when it comes to making the music you wanna make…but to give the “Haterzz” this much of your headspace might not be the best thing for an artist’s music/career.  Could just be me, but that’s how I see it.  Aside from that, “Let’em Talk” goes for a stylistic approach, moves at a mid-tempo pace and has solid minimalist music with huge low-end sound filling the atmosphere.  Shaka’s gone for a more anthem-esque performance on the mic through the main hooks of “Let’em Talk” and the rhythmic-meets-hypnotic approach he’s got on this cut still plays to his advantage.

My main argument is that I think Shaka’s got more to say…that’s all I’m trying to say I suppose…and I think that side of his expressive nature is still yet to fully break through…right here on Mi Vida, we’re getting a glimpse & a taste of what he’s capable of…but I suspect there’s more in the tank that he’s saving for the ride to follow.  Most importantly however – he owns his material with authenticity and sounds confident in his performances…that’s going to lead him down the right path ultimately and he’s got plenty of ideas, talent & skill to continue to build on as his music evolves over the years to come.