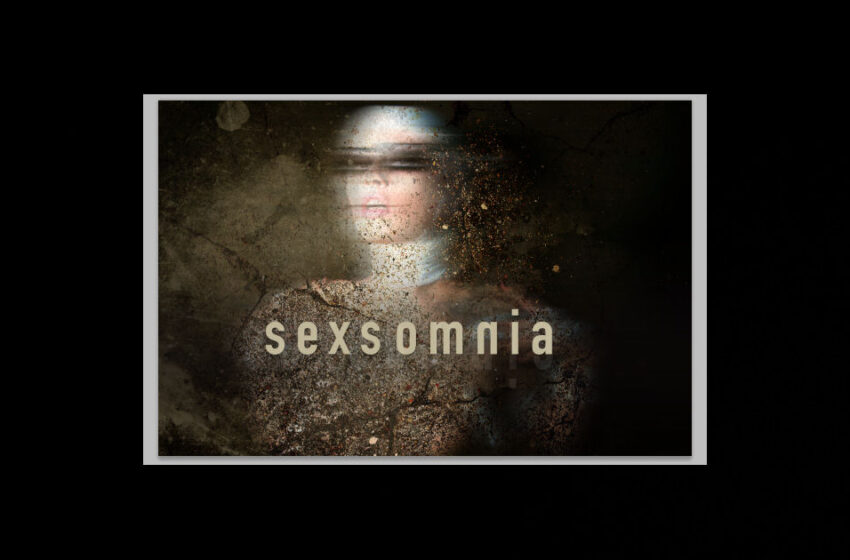 This can be an extremely tough business when it comes to truly knowing what to draw attention to & what to let slide…we’re gonna get into that a bit here when it comes to this new single from our pals friends in SEXSOMNIA, based out of good ol’ Montreal…not too far from where we’re currently based in Ottawa.  If you’re a regular reader here at our pages, you probably remember them from last month when we posted up their self-titled anthem “Sexsomnia”…not because they write their band’s name in ALL-CAPS, because good lord, that’s not a thing that ever really works or stands out any more than anything else in the black hole we know as the internet, but probably because they truly earned your attention with a great sound of their own, great video, and genuinely excellent song back in April 2022.

Now…word on the street…is that their brand-new video for “Catharsis” was pulled down from YouTube – you know, the very same fascist fucks that put up the majority of the kitten videos you watch instead of listening to awesome music instead.  The very same folks that we ourselves walked away from back in like…hmm…something like 2015 I suppose?  YouTube has a nasty, nasty habit of reaching into accounts, manipulating results, favoring those that pay the big bucks, ignoring the rest of the creative community, and usually doing what they can to suppress real art – other than all that, I’m sure they’re totally nice.  Anyhow.  As it turns out – for whatever reason…or reasons – neither of which they specified in detail because they’ve basically got a monopoly on the internet and answer to NO ONE – they recently pulled down the video for “Catharsis” by SEXSOMNIA because it violated their blah blah blibbity blah blah rules or whatever justification they decided to slap on their unjustifiable decision this time during their current spree of victimizing.  I stopped caring about YouTube’s bullshit years ago and just started paying happily for a Vimeo subscription – if I post anything at all at YouTube, chances are, it’s years & years old now.  If I thought “appealing their decision” would make a lick of difference, I’d advise SEXSOMNIA right away to send them a message – but it won’t matter – they’re Gods on the internet, and do not respond to the requests or inquisitions of us mere mortals.  I can tell you that there wasn’t any “violation” here by what SEXSOMNIA created with “Catharsis” from what I can see or hear – this is just YouTube’s almighty algorithm twitching out and erring on the safe-side to make sure we don’t experience anything too awesome, lest we might actually enjoy being on the internet & cruising through their site for more than 5 mins.

YouTube as a whole, is absolutely scared of our originality, creativity, and those that MIGHT push the boundaries – hence, chances are, it was the band’s name in ALL-CAPS that had them rushing to take this video for “Catharsis” down right away.  Therein lies a new problem though…and this is why it’s important to be careful on what you choose to bring up during those pivotal promotional times in a band’s career.  Sometimes you’ll run into motor-mouths like me that’ll go on & on about YouTube being greedy corporate overlords and all that garbage I’ve already been spewing at you – and the other thing can be even worse – when we know something has been BANNED & BANISHED – hell YES we’re going to look and listen to find out what caused such an offense to YouTube’s ultra-sensitive ass-clenching.  And when we look…when we listen…and we find out there’s no reason at all…and things are…dare I say, frightfully normal…we kind of have to wade through the underwhelming feelings of not finding the controversial gold we were seeking out & hoping to find.  It’s like being held up in traffic for hours because of some crash, only to find that it’s been completely cleared of all the wreckage, destruction, and carnage by the time you get to the spot where the accident had taken place…now there’s nothing but potential disappointment. 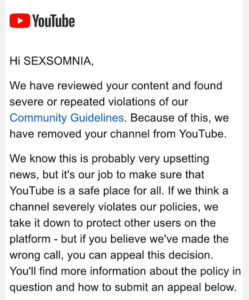 So did I enjoy “Catharsis” in knowing all this stuff?  No!  But of course not – who would?  I enjoyed it because it’s a solid song and an extremely well-shot video…but no one is pushing any boundaries here, and there’s not an ounce of this single that’s offensive in any way, shape, or form from sight to sound.  I enjoyed “Catharsis” because SEXSOMNIA’s a really damn good band…not because of any controversy that’s been stirred up here – there isn’t any!  It’s just a decent tune, played with style, and paired with visuals that are suggestive at best without coming anywhere close to justifying any kind of butt-hurt ban from YouTube.  They’d theoretically have to ban every single movie-trailer for Eyes Wide Shut to this very day if they wanted to somehow justify taking down what SEXSOMNIA has created – it makes no sense for YouTube to have made the decision they did, but they’ll get away with it, because they always do.  As much as I’d love to say Vimeo is a wonderful alternative, it’s not – it’s virtually ignored by anyone & everyone that has eyes & ears, and cuts traffic by about 85% in total.  I can say that from the firsthand experience of being a content creator that has been proudly ignored for more than a decade now at that site myself.

Anyway.  Do I feel bad for SEXSOMNIA?  For sure!  They’ve got another solid & sleek single on their hands that deserves to be heard, and thanks to some internet algorithm bullshit that shouldn’t even apply to them, they’re going to have to work a ton harder just to get the eyes & ears they deserve tuning into their new video for “Catharsis.”  YouTube is a site built by assholes, for assholes.

Two bass players in this band too eh?  Not sure how that escaped me the first time around, or if that’s just something they decided to do for this song – but that too is a recipe for an extremely kickass sound if you ask me, and they’ll prove that to ya with the fluidity of their stylistic vibe on “Catharsis” – in fact, I’d go as far as to say that the vast majority of the hooks you’ll find are in the music itself on this particular single.  The video works well…the song does too…again, it’s all a bit too much on the normal side when it comes to knowing that “Catharsis” was banned by the internet harlots at YouTube…but were it not for knowing any of that, it’d probably be that much more enjoyable.  And that’s the thing folks…ignorance can be annoying, but it can also be bliss too…it’s six or one-half dozen of the other I suppose…I’m just here to tell ya what I know, what I hear, and the details I get behind the scenes.  YouTube might have put another obstacle in between SEXSOMNIA and the audience that they deserve to have…but I’d far from count this band out of the battle for your attention overall – it might take more work to get their music out there now, but once people hear it, they’ll dig what they find for sure.  “Catharsis” is another stellar cut from SEXSOMNIA from the speakers to the screen in my opinion – so fuck you YouTube…take your overboard sensitivities & your dictatorial censorship and please shove’em both where the sun don’t shine.

Find out more about SEXSOMNIA at their Facebook page:  https://www.facebook.com/sxsomnia