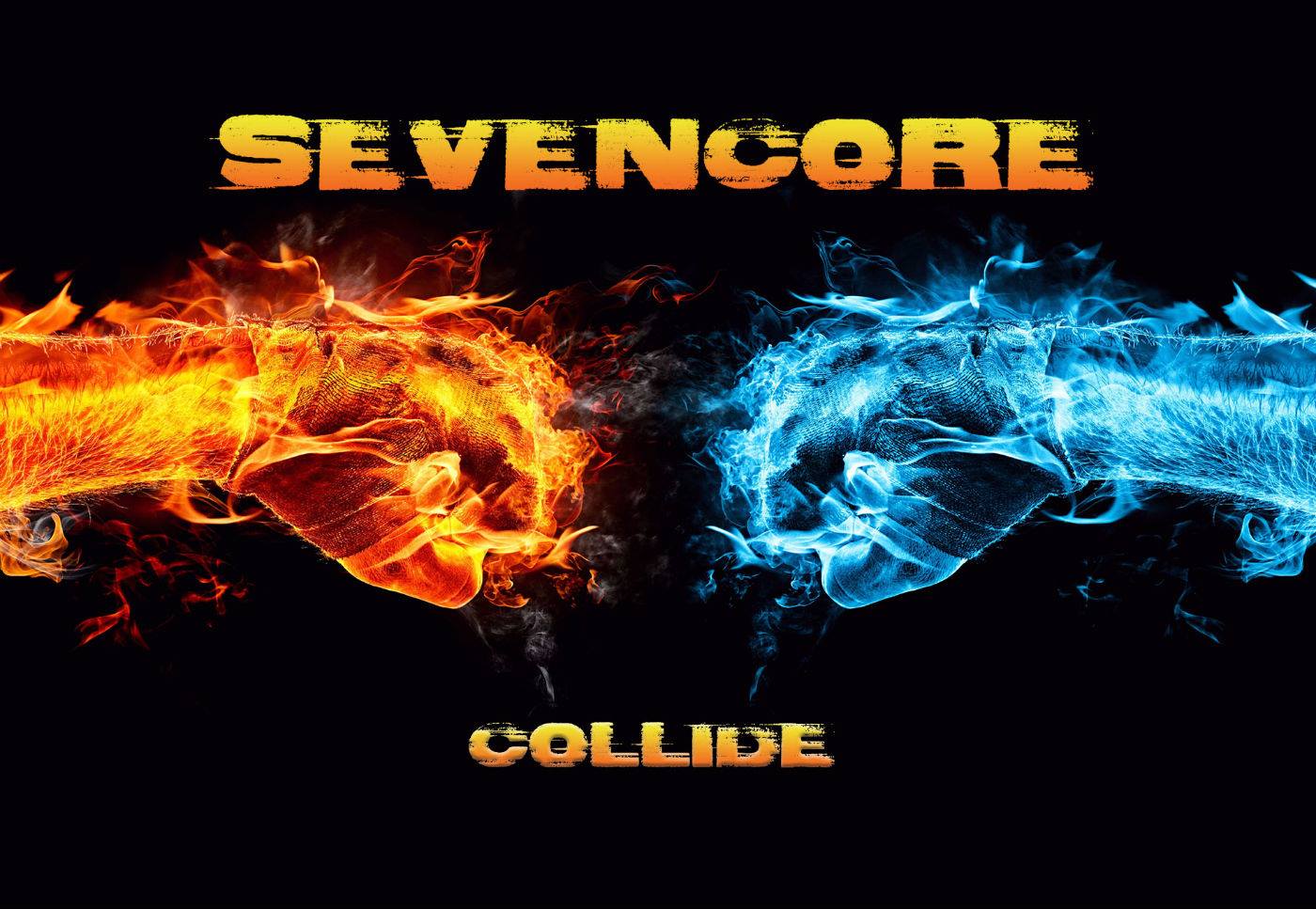 Well now! So far so GOOD!

I gotta admit…seeing the name ‘seven’-anything makes me instantly cringe at the thought of the world possibly having given birth to another version of the band Sevendust, or Seven Mary Three while I was asleep on watch…and what a terrible tragedy that would truly be, were it to have happened. Thankfully that’s not even close…well, certainly not to the Sevendust-side of the extremes of those examples, which was really my main concern.

Instead, Sevencore reveal themselves quickly as their own brand of melodic-rock…it has enough edge, it has enough melody…almost like it’s been parsed-out like chemicals to a formula. A working formula mind you; Sevencore does what they do well and definitely have a grip on the sound they’re looking to go for. Often led by wicked guitar-riffs and rumbling bass-lines – the St. Louis three-piece keeps the energy up and rampant through the grind of combining music with heart with added aggression and emotion that comes through well-mixed, well-produced & well-performed.

After listening to the album however…there are parts of me that wonders just how much they’ve done to set themselves apart from the rest…or if they’ve done enough…or if that matters even! They’re a solid-rock band…you can hear it from the way they structure their title-track/album-opener “Collide” – these guys clearly know their way around their instruments and how to bring a song to a full-boil. With a fantastic balance of melody and rock combining for a beginning that pulls you in; you might find it pulling you for the hooks alone – or like myself, it also makes us curious as to which direction they’ll head in next on the new Sevencore album.

“Chameleon” takes it a step-further in revealing the melodic-side of this rock band with a very well-written tune that builds continually throughout its progression to a pounding ending. These guys kind of remind me a lot of a combination of bands like, maybe Brother Cane-meets-Feeder kind of energy; great crunch to the guitars and great tone in the vocals to make the brightness in the melodies come alive. The same holds true for “Less Than Special” – which was actually quite the opposite experience for me despite the implications from the title! This tune gripped me from the moment it started-out, and of the three on the album so far was the song that stood out the quickest. So Sevencore…maybe it’s just the titling that needs work on this track lol…I think you’re selling this song short – it kicks ass with great alternative/punk energy and truly rocks from the time it starts to the moment it ends. The vocal layering, ideas & execution are freakin fantastic!

Songs like “Get Me Over Her” bring out the power-pop/rock sound extremely well on Collide. On a track like this…again, I have to thank these ‘seven’-ish guys in Sevencore for being nothing whatsoever like Sevendust – “Get Me Over Her” definitely goes a long way with its sweet-sentiment and bright-music to prove that. Excellent breakdown in this cut…just past the two-minute mark and before two-minutes thirty, Sevencore absolutely lights this song up to its maximum potential, delivering ALL the goods. It’s another fantastic track with an insane amount of energy contained in the music, and combined with the roll they’re on with this tune following “Less Than Special” – they’re in the flow clearly as this album heads towards its middle.

Finding another wicked melody in “Landslide” – this is certainly one of Sevencore’s strongest melodies and songs at the dead-center of their album. While it does contain a few moments that come out sounding a little over-full – those moments are more than worth it to get to the audio-gold you can mine out of this mountain-sized melody. “Landslide” takes the thrashing alternative/pop/rock sound that bands like Marvellous 3 and Feeder started us towards in the late 90’s and brings it singing-sweetly into the here & now. “Landslide” heads from small to big in a heartbeat’s amount of time from moment to moment and really packs an extra-emotional punch through its lyrics and vocals.

The following combination of “Believe” and “Letting Go” following each other back-to-back take the energy back a step and more towards the rock-ballad territory. I think “Believe” was the toughest track for me to love on this album by a far margin; it’s hard to knock the song as it’s as well-played and well-written as the rest, still built on big, solid-hooks that are guaranteed to snag listening-ears from all-over…but on this particular tune, the vocals come out a little closer to a whine than I think they’re looking for. So…I felt a little iffy on that one to begin with…and then as “Letting Go” started, I thought to myself ‘yeah…THAT’s it.’ Not as in I was done with the band – no – it was more like I thought they found the vibe that they were looking for in “Believe” much more concretely in “Letting Go.” Well-sung by Jeff Mueller…it’s a melancholy tune for sure, but Sevencore delivers this one very sincere & convincingly-honest through their combined performance. A rock-ballad that is clearly an open-vein of emotional-lyricism…they’ve done extremely well to bring “Letting Go” to vibrant-life.

“Shine Down” might have had the slight opposite-effect as “Letting Go” did. Again…what can you do other than sit back and listen to how these three guys deliver it all perfectly; “Shine Down” is another sparkling example of the tightness of the band, but perhaps also their most ‘typical’ tune when it comes to writing rock-music. I think that as far as the music, guitars, bass, drums and vocals are concerned – all three of these players are cracking the bat every time…but I also think they’ve already displayed a lot more creativity and innovation than “Shine Down” really gives ya. So it’s like eating a snack that doesn’t quite fill you up…you enjoy it, but you still feel like you probably need at least two of them to satisfy the craving for more.

“Smells Like Rain” takes the music in more of a Hoobastank-ish kind of energy…slightly harder edge in spots as they range from supreme-rock to supreme-melody in their music. The transitions are solid…the ending is all-out madness and the hardest-extremes of the sound of Sevencore are on display right at the albums final minutes, highlighting the fact the can rock just as hard as they can write a solid melody & hook. That being said, “Smells Like Rain” is probably one of the lesser-accessible tunes for many, but a track that musicians and audiophiles are certain to love. It’s hooks take a little more time to grow on the ears, and in truth, I don’t think Sevencore is intending to write anything other than the music as it comes out naturally…I don’t think that they force anything specifically – but as far as placement goes, the structure of the album certainly warranted this amped-up mayhem at the end of Collide. “Smells Like Rain” is written and structured intensely like a finale in a live-performance and perfectly closes off this new album with a thrashing-bang & crash of an entire wall-of-sound by its end.

If you want to cop yourself a solid-sample of what this band is all about sound-wise, you can get yourself a free copy of their song “Perfect” – which isn’t on the album, but certainly could have been. As a result and BONUS for you music-vultures out there like me – we get ourselves a copy of this hard-edged tune that keeps the combination of dark-rock & brightened-melody that you’ll find runs wickedly-rampant throughout their album Collide. And Sevencore…wait…you’re telling me that we can get this FREE?

Well there’s only one word for that isn’t there? “Perfect.”