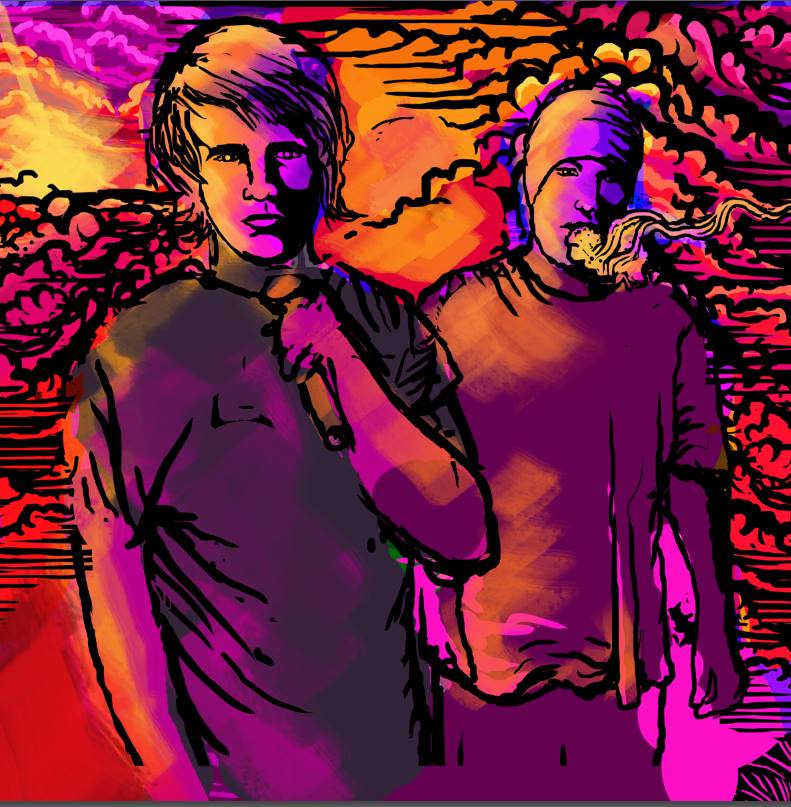 I’ve never been one to be afraid to listen to a demo recording. At live-shows, I pride myself on being able to hear the essence of a band despite whatever hack soundman is doing to thwart my efforts. The point being, when true talent exists, you can always easily hear it. Just because we’re not all sitting in the middle of a recording studio, or have one nearby, or the funds to even USE it…none of these factors should ever discourage ANYONE from making music. Record it on your fuckin phone for all I care…just continue to create & put everything you’ve got into the elements that you CAN control, and believe me, you’ll get to where you want to go.

So here we are…with the demo-rhymes of Seany Juevos and Tommy T. Tom as they lay it down thick on The Juevos & T. Tom Demo. I mean, first of all people, let’s not forget that the whole purpose of a demo is to get it out there for people to listen…and THEN you get the right support to go after it all for real. So let’s put production-aspects on the shelf for now, and concentrate on those elements that were in the control of Juevos and T. Tom.

Cause with the tools that they’re using and the skills that they so clearly have…anything within their control was delivered with a master’s touch.

I’ll fully admit, though I definitely dig some hip-hop & rap from time to time, it’s truly rare that I really feel that connection to the songwriting…but here on the Juevos & T. Tom record, I feel like I’ve found something in the genre with a writing-style you can truly respect. Listen to the way these tracks come together, beat for beat, it’s really something. This pair is delivering flawless rhyme after flawless rhyme, and though much of the content might be mired in the typical themes within modern day rap, bitches, money, drugs…it maintains an authenticity to it. They never reach beyond their own scope…you know what I mean? They relate the true stories of their life through these songs, but don’t make it all seem like it’s bigger than it really is…there’s a humbleness to this record that I really respect & dig.

Right from the start, even though it’s blown right out, I dig what’s happening right from the opening track “Lounge Freeverse.” Right away you can hear the synchronicity and true ability to meter lyrics & time out those words perfectly. And that blown out sound might be a stylistic choice as it does only pop up every so often; and again, after you listen and get a taste – tell me that YOU would throw that performance away! NO POSSIBLE WAY…it still plays, and they gave their all to it on the mic right from the drop.

I found myself digging on the more subdued and minimalist tracks on this demo album. Juevos and T. Tom come across very smoothly and stylistically on tracks like “MF Freeverse,” “Hamburg Freeverse,” and “Madlib Freeverse,” all become interesting through their lyrics. That is to say, these beats are nice and simple…until they get all kinds of complicated by the tricky flows of Juevos & T. Tom.

And…I’m kind of mad right now…mad at them, mad at myself…I can’t identify the sample that they use on “Aoy” – I KNOW that I know it too…it comes from an absolutely bizarre place too I’m convinced…like, a video game intro-screen, drive-in movie maybe? Something…BAH…I have no idea and I’ve given up on pursuing my brain for this knowledge like, ten listens ago… Whatever it was, it works really well…this quaint little guitar line strung together through the edit, and again, perfect delivering. There truly is a ridiculous amount of talent here demonstrated by these two…I can’t see this natural ability sitting on the sidelines for long, those people I talked about in the opening of this review…believe me, we’re listening…

You can tell they’re young, but you can’t tell they’re NEW; the way these two click together on a beat shows the same intensity and prowess as a veteran MC. They finish strong as they head towards the end of the demo; tracks like “Distract The Dispatch,” and the absolutely stellar “Roadblocks,” are more confirmation of the level of skill in their rhymes. Try and find an out-of-place beat or rhyme on this demo-effort – you won’t find it!

Someone out there needs to notice these two for the work they’ve already put in here…and from here on they need to take it upon themselves to take it all to the next level of whatever rap is going to be in these next ten years. We could continue rhyming about the bitches, money & guns & drugs…but we’ve been doing it for nearly fifteen years now…so what’s next? It seems to me that with the level of insight these guys have put into their tales, that were they to think long and hard about what that next craze might be out there…there’s a good chance they’d come up with it before anyone else. There’s a golden opportunity in rap-music right now to make a sound equally as big as when rock band Nirvana told all of pop music to shut the hell up…and they took that genre to a real place without plastic. I think that same moment is due for rap music soon, and to be really honest with y’all…these two, Seany Juevos and Tommy T. Tom have shown every indication from their rhymes and wit that they are two razor-sharp individuals. It wouldn’t surprise me at all to hear these two on a pro-recording, catching on and changing the game completely one day…The Juevos & T. Tom Demo is a wicked start and truly, the best is still yet to come from these two. You can hear passion, skill, determination and commitment…and if they keep on at it like they are on this demo record, it won’t be long before they find themselves fully signed to a label of their own choosing.

Check them out right here through bandcamp:  https://seanyjuevosmusic.bandcamp.com/album/the-juevos-t-tom-demo