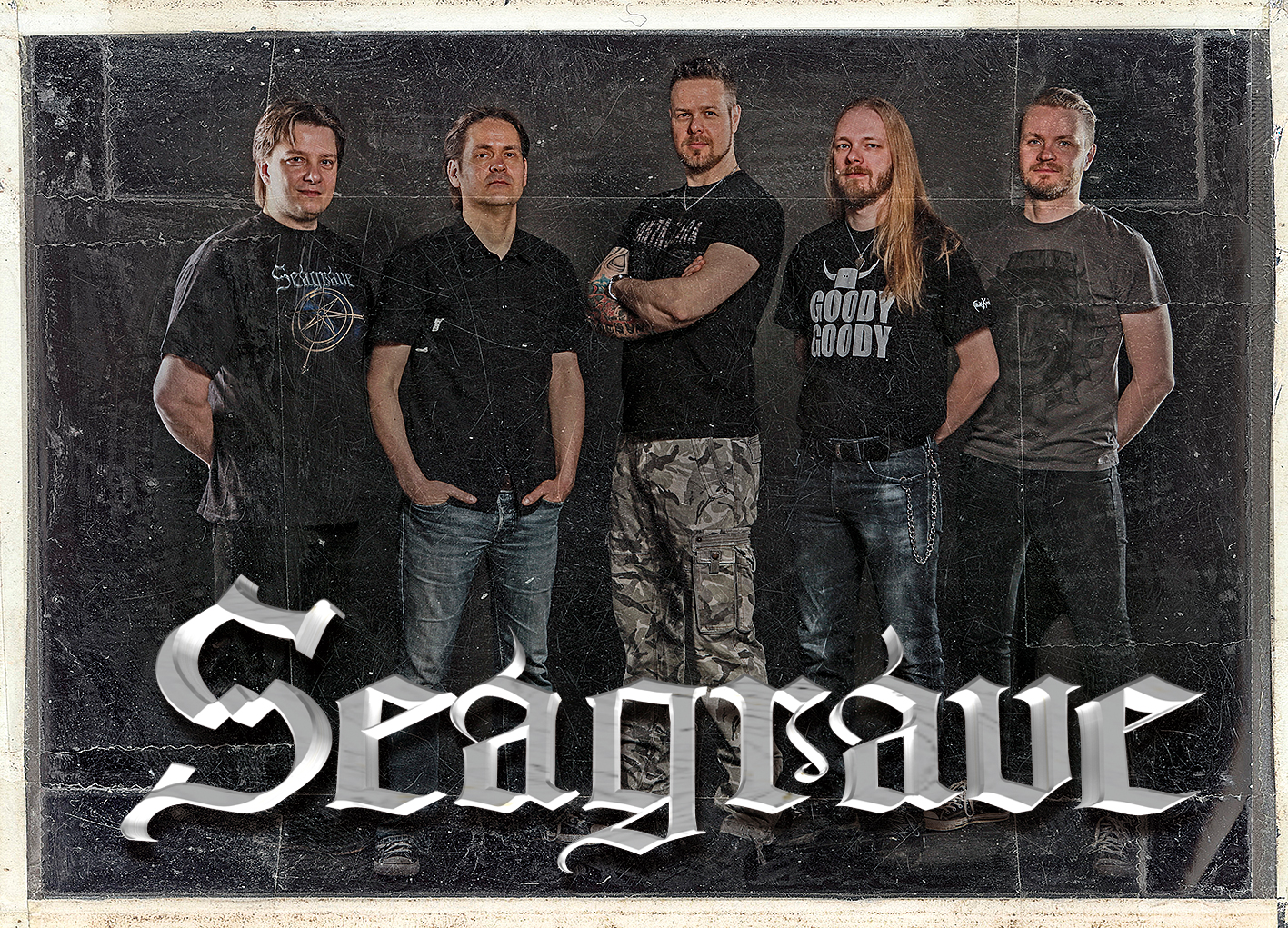 You know…after nearly three years of writing solidly conquered here at sleepingbagstudios, I can safely say I finally feel well-educated enough to comment sufficiently on music like Seagrave makes. Many thanks to Leighton from Iron Kingdom and Ruddy from Aeterna for taking the time to educate me somewhat on metal and its differences back in the day on SBS Live This Week when we brought in our indie-metal experts to help drill some knowledge into me. I think it worked…well enough at least…and hopefully it stuck with me; from what I hear in Seagrave, I’d say I’m hearing a mix of traditional metal sounds mix with a touch of prog-rock attitude on their new album The End Of Silence. Again, maybe two years ago…I might have still come to the same conclusion, but I couldn’t have written it with the confidence I’ve got in that being accurate as I can today.

But it’s not just that…thanks to the independent metal-scene out there, I genuinely feel like I have a better appreciation and acceptance of metal & its sub-genres now. And sometimes I only realize just how much of an impact this has made over the years when I put on an album like The End Of Silence, which, in my mind is still not something I’d normally listen to…and I find myself instantly clicking with it. It still manages to surprise me how readily I’ll accept it now as opposed to before; I used to think that just because I’ve heard a particular style or sound be done in the past that it could potentially have little to offer me in the present-day – but I think it’s bands like Seagrave that prove there’s still much territory to be mined for metal-gold and manages to re-energize a sound that many people know, love & continue to rock to on The End Of Silence.

Guitars rip-open their new album as “Airborn” begins…and as if on cue, the lead vocals shoot straight into the sky with the traditional-metal vocal-acrobatics. Excellent beat & rhythm…and although bands like Seagrave are generally not defined by the low-end – LISTEN to this bass-line! Like I said…it’s a style of music that keeps it minimal in the mixing-phase and final-cuts – but if you set your ear to listen to it, it’s phenomenal and really keeps this track moving alongside the melody in the vocals and guitars. The guitar solo & scales around the three-minute mark are completely noteworthy…solid 30-40 second solo in around this part of “Airborn” before they head into another tear into their verse & chorus. Wicked energy in this first cut, it ends spectacularly and immediately raises the expectations for what might follow – Seagrave is here to make their dent in music a noticeable one.

“End Of Silence” reveals the more early-80’s prog-rock influence on the band with a title-track that is just as much Rush as it is Dio. Once again, Seagrave puts in a tight performance and really sounds unified in their music – the main guitar-riff/hook outside of the verse is massively strong. I dig the instrumental sections just as much if not slightly more than the rest even…and heading into the magic of the third-minute once again, they switch-up the energy for a bit before heading into an incredible solo and breakdown. Lighting up the hook once again – this is a guitar-player’s dream to write something this much fun AND this powerful at the same time – “End Of Silence” would be wicked to play every time out on stage I bet. Demanding on the vocals at its end and delivered perfectly – they’ve nailed their album’s opus-magnum 100% of the way through.

I think why Seagrave’s new album is hitting home for me is the incorporation of melody into their metal, and the resulting triumphant sounds…there’s an energy to their music that sounds like it could easily command its own army of metal-heads. Songs like the subtly-introduced cut “The Undertaker” and the following more straight-ahead rock/metal of “Into The Darkness” are highlights in this example of melody & extreme-rock combined. I dig the switching energy & atmosphere of “The Undertaker” and how its lyrics really emphasize the music in all the right ways…its quite the story and it fits the mood of the music perfectly. Another solid ending as it drifts away beautifully and heads straight for “Into The Darkness,” where the bass & guitars immediately begin to threaten once again. Vocally, this tune was one of my favourites for sure…the guitars in the verse might have been a little too close to the Van Halen sound for me, but the song works overall and really switches through its bridge & chorus to an even bigger concept & idea realized. “Into The Darkness” also confirms just how well the lyrics fit their music-style and true to their influence and genre the band is in-full…this is a wicked, wicked tune and great blend in ideas & sound. Still turned down…but not enough for me to not notice – the bass is once again KILLING it in this song in the background…that’s a damn good player back there…let’s find out who that is exactly… Petri Isomäki – hats off to you sir!

Proving their versatile-nature and ability to explore their sound & genre, “The Citadel” is a highlight performance from ever member of this band and for myself, the most memorable melody they’ve brought into their music so far on The End Of Silence. It’s EPIC…and considering it’s actually one of the shorter tunes on the album, it’s massively impressive to sound as big, full and well-thought-out as it is. Michael Henneken recalls the sound of the best years of a young Axl Rose as he first began to challenge himself creatively and innovate the Guns & Roses sound to become more than merely metal. I think Henneken brings out the best of himself on songs as big as this one; lyrically, vocally…performance-wise and delivery – he’s put in a stunning performance on “The Citadel.” Easily one of my favourites.

Not to be outdone, the guitarists put in some of their own best in the eastern-tinged atmosphere of “Black Clouds.” Ari-Matti Rintala and Elmo Karjalainen put in noteworthy performances here and amp-up this particular cut with an energy & vibe unlike the rest. The tune truly comes alive & sounds brightest when they take the lead-hook for a solid run in between verses through the vibrant guitar sounds and strong drumbeats from Vesa Kolu who transitions the music solidly through part after part. Far from finished declaring their presence and making themselves known in Seagrave’s music – these two guitar players slay through “Immortal” in a sonic shred-fest. Cleverly written, “Immortal” tears through both the tough & the delicate as it rips through the verse, and increasingly lightens-up towards the powerful, melodic-chorus; and whether or not they realize it – Seagrave hits that magic-mark around the three-minute spot once again like they all huddled together before the recording and all agreed upon it, like one of them says, ‘oh yeah guys…don’t forget to LIGHT IT UP around the three-minute mark…you know how we do’ and they all run into their respective booths to lay down the thunder…

Wicked crunch to the guitars in “Sea Of The Dead,” as they head back towards a bit more of that traditional metal-influence with this mix-tempo tune. There are definitely standout moments on this one…but perhaps not only a little mixed in tempo, but mixed in results…wasn’t Henneken’s strongest performance, but nothing off-putting…we’ve just heard him stronger previously is all. The moments in the chorus with backing harmonies could out sounding great. Some of the best guitar solos on The End Of Silence take place in the midst of “Sea Of The Dead” and the bass is slightly more pronounced in the mix to make out its awesomeness.

With a somber, desolate and drained feeling, a marching-beat & forlorn guitars begin “Winter Sky.” This might be our first time hearing Seagrave and the guitars of Ari-Matti Rintala, but we’re familiar with the sound of Elmo Karjalainen…and I’d be willing to bet that’s him starting out this track with its melancholy feel & vibrant tones. This track breaks loose of its bluesy-beginning and explodes just after a minute ticks by…another rallying battle-cry feel to the vocals and rush of the music. Dark guitars grind and Seagrave winds through their longest track on The End Of Silence before its final ending, progressing fantastically through ideas, creativity & big sounds right to its screaming end.

One of the most wonderful effects of “Winter Sky” is how full it is…and how once it pounds out its ending, the resulting silence afterwards sets the perfect stage for “Farewell,” the albums tender final tune. Showing once again how much more than just ‘another metal band’ they truly are – Seagrave’s final tune brings you in close for the most intimate song on the album; “Farewell” is a brilliant ending. Acoustically-natured, with beautiful harmonics laced into the guitar-work, Henneken puts in a fantastic performance in this last track…he doesn’t scale it down just because the music does…he finds the right energy in the song to use throughout the verse and chorus but isn’t afraid to still let it rip by its end. “Farewell” makes for a completely perfect moment on The End Of Silence, ending the experience with Seagrave in a highly memorable way.

I mean…the pop/top-40 crowd are going to struggle…but the metal-heads & rockers out there will find a lot to listen to throughout this album. The End Of Silence harbours a massive level of dedicated-precision and talent and the hard-working spirit of a band that truly loves & has a huge respect for their genre and music. Solidly played, produced and performed from wall to wall, excellent work.

Find out more about Seagrave through their official page at Facebook here: http://www.facebook.com/seagravebook