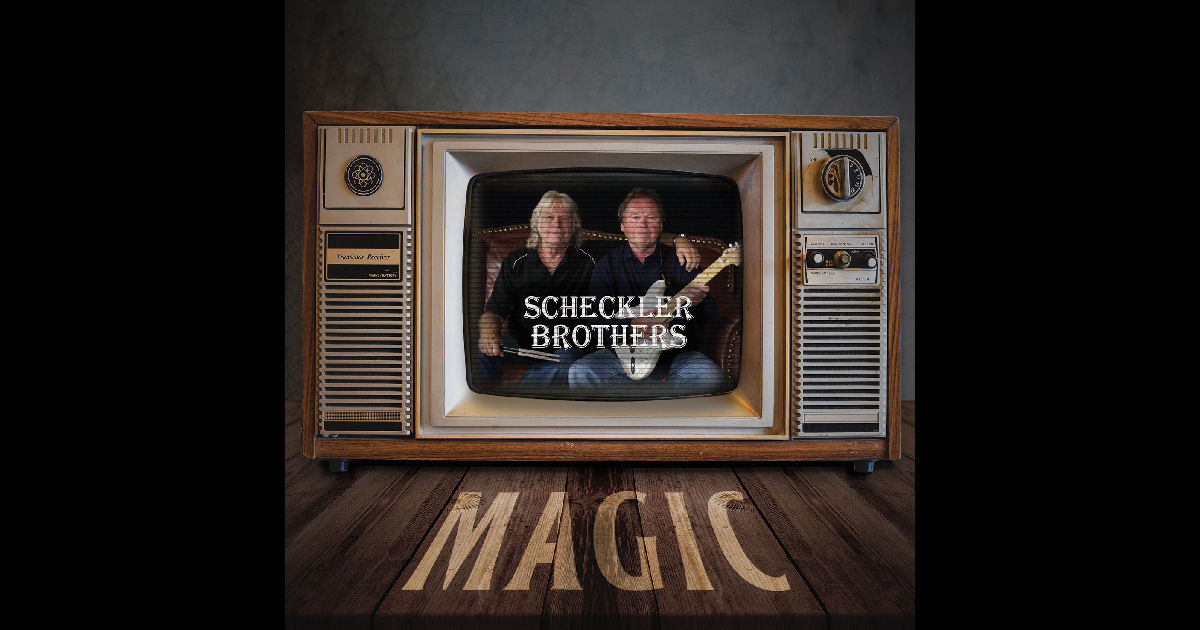 Hmmmmmm…unless my ears are deceiving me, there’s a Scheckler Sister in the mix on this new tune by the Scheckler Brothers…

“Songs Like Yesterday” comes from their brand-new record called Magic; from the looks of things online and the positivity & love they’ve been getting for their music, the Scheckler Brothers are doing pretty well out there in the court of public opinion…I can understand why that would be.  Especially once you start cracking into the biography & online info & all that good stuff…then you start to learn about how these two brothers that took separate paths towards this collaborative project they’re together in now.  They were refining their own individual skills, opening shows for impressive names like The Troggs, Herman’s Hermits, Eddie Money, CCR, Three Dog Night…and believe me, their combined list goes ON.  So by story & legend alone, it’s pretty safe to say that you can assume by their resume, these guys can play & hold their own.  While some of their experiences intersected over the years, life can get in the way – and even two brothers can get so busy that, even when you’d probably assume or think they’d have every opportunity to make music together…from what I gather, it’s really only now that they’ve gotten the chance to really sit down, hash this all out, focus in on what they really want to create, and play the music they KNOW they’ve always been meant to.

Cause this sounds good, this sounds right, this sounds comforting – and this absolutely suits them.  As you might expect from the implications of the title, “Songs Like Yesterday” proudly looks backwards in a beautifully nostalgic reflection.  The imagery in the lyrics is spectacular…but much could be said of pretty much everything about this gorgeous tune, truly.  From the harmonies, to the STUNNING design of the melody that they’ve created in the chorus hooks, to the overall execution from production to performance – Scheckler Brothers have written & delivered a seriously pleasurable single-worthy tune.

Where things would normally get tricky is where this band is going to excel with “Songs Like Yesterday” – I’m not gonna lie to these guys, this SHOULD still be an uphill battle to get this single heard in the modern-day mainstream…but not impossible, not by any stretch.  There’s a HUGE audience out there for a song like this – and because everyone involved plays & performs this throwback-influenced vibe like they truly own it, “Songs Like Yesterday” completely fits its entire theme & sound together as one.  Essentially, they’re mirroring exactly what’s being sung about…nostalgic for the days of the past with music they love, several artists/bands of which they’ll even go on to name specifically at one point in the tune…but as they’re pining for the “Songs Like Yesterday,” they’re also creating a new old sound, one built for today.  You see what I’m saying?  How cool is that?  I’m telling ya, everything fits perfect here.

The guitars have charm & personality, the rhythm section is right on the money & holds this tune steady as it shifts & transitions to reveal the absolutely breathtaking melody that they’ve created in the chorus.  Don’t get me wrong, plenty of great things in these verses too, lots of great details & lyrical imagery that ultimately makes this entire concept as strong & cohesive as it is…but that chorus…that…CHORUS – that is THE Magic right there.  That’s audio gold, straight-up, full-stop…absolutely exquisite to listen to.  Specifically, the vocals…I mean c’mon people, if you’ve got ears attached to your head, you can hear the incredible tones & harmonies coming from the microphone in this duet-style single…these two singers sound awesome together.

…dear readers, dear friends…it’s finding sincerity in melodies like this that gets me out of bed every morning.  Never matters to me which genre, never matters to me which style…I’m not even nearly as preferential about WHEN my songs come from, as long as they can make that connection to the mind, body, or soul, somehow, some way.  “Songs Like Yesterday” radiates the sweetness of the old-school music & melodies that so many of us have grown up on, cherished, and loved – beaming it out really, like an audible hug from a long lost friend that is so beyond welcome upon return it’s hard to explain.

Love the design & structure, love the performances from all involved from the music to the microphone – “Songs Like Yesterday” is the kind of quaint, pleasant, and enticingly inviting sound that is truly as timeless as the songs, artists, & bands it’s so proudly paying tribute to & honoring through the words.  Really well thought-out tune from start to finish, flawlessly executed, and highly memorable – the only thing that’ll stop you from longing for the other “Songs Like Yesterday” is the fact you’ve got this one now to enjoy today.  So do that!

Find out more about Scheckler Brothers at their official homepage:  https://www.schecklerbrothers.com