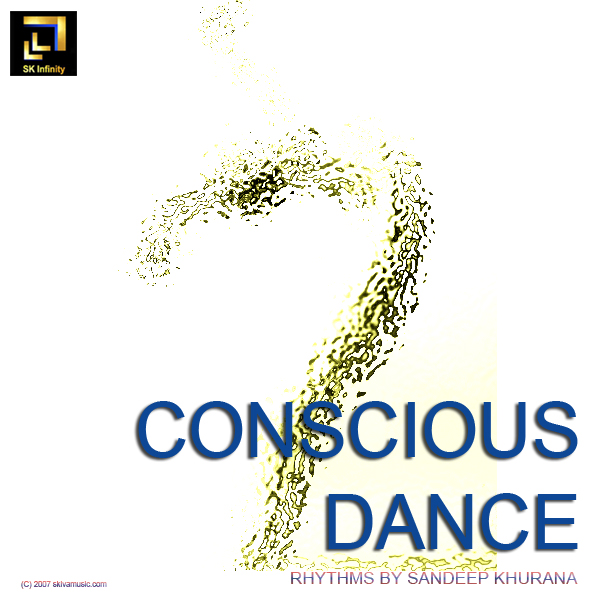 What an accurate title for an album in this style! I can admit, I haven’t spent a lot of time in the drum’n’bass part of the world, but I’m well versed in all-sounds of the instrumental variety. After a thorough listen, Sandeep Khurana has a lot in common with a lot of the artists I currently listen, even outside of his genre. Conscious Dance Rhythms has plenty of groove and a variety of sounds that make this drum-led album closer to music you love already than you may think.

Now… I’ve let this album spin in every direction I can – it’s incredibly produced and absolutely easy to listen to over and over again on repeat. I’m not kidding even remotely – this album has been helping me get things DONE here around the studio!
Conscious Dance Rhythms…like I mentioned, I love the name of this album. I’ve been able to really let my mind go…just drift in and out of the music. Seriously! Go put on “Soul Purification Chants” towards the end of the album…which is built of…well…exactly what the title describes I believe! I don’t know if I’ll even put my finger on it by the time this review is over to tell you the truth…but there’s empowerment rooted deep in this music I swear!

Not only is it produced extraordinarily well, but it has the perfect flow from beginning to end. Starting ramped-up with danceable beats like “Neo Sacred Drum Circle” and “Indulgence Tribal Trance” was an excellent beginning to the album with the just-below-the-surface intensity of both tracks surging profusely. Female vocal samples are incorporated dreamily into the music, each sample timed perfectly and fitting into the music like another instrument at Sandeep’s disposal. “Heartbeat Trance” contains one of my favorite samples in this sense, with the “vocals” really just being a hum of sorts, but so inviting in its tone and so necessary for this track to work as well as it does overall.

“Sacred Vibes Of The East” is certainly a noticeable track in how it stands out from the previous three. With wickedly assembled patterns and change-ups – this is where Khurana’s skills as a producer really shine through. There’s a lot going on in this track, yet it remains spread out and minimal; it’s never over-crowded in sound and every random piece of audio coming at you fits the song in perfect time. Less danceable, yes, but perhaps more imaginative overall; I mean, I dig this track and how almost…unconventional it is…but it WORKS.

“Hypnotic Rhythms,” is like the culmination of the sound on Conscious Dance Rhythms. With a beat that’s complex in design, yet challenging to the ear much like “Sacred Vibes Of The East” was – it also incorporates the female vocal samples once again after a short break. Sandeep truly uses this voice spectacularly, weaving it gently in and out of this trance-inducing beat. “Hypnotic Rhythms” and the following track “Slow Rhythm Color Rainbows” will also make you appreciate just what a wonderful tone and sound Sandeep has been able to get out of these drum selections. The low end of the drum comes in absolutely crystal clear – but taking you RIGHT to the edge each time it hits low, almost daring itself to break through the mix each time. The recording of this entire album is just perfectly crystal clear, containing drum tones and sounds that would make any artist or band jealous.

The final two tracks from the album resonate with me in a similar way…in that they’re both AWESOME. Consisting really only of chanting and sparse sounds – these vocals are just spot on. “Soul Purification Chants” and “Expansion The Krishna Way” are two tracks I can’t wait for to come around in the rotation. I’ll admit that yes, an entire album of this would probably have been too much for me, but as the final two tracks on Conscious Dance Rhythms they work beautifully. Stepping completely aside from the drums and relying on vocals & effects was a great move to bring about a final change in sound on this album and end it with killer finale. This album FEELS great to listen to!