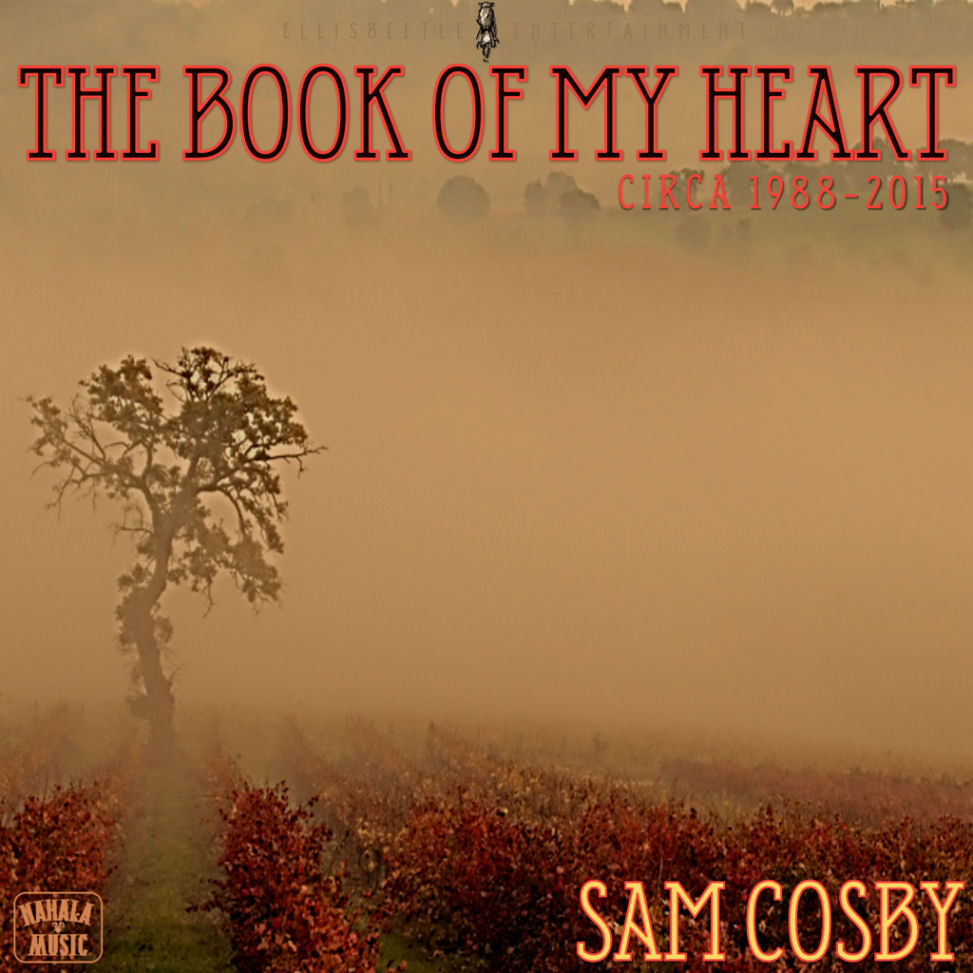 Reading the story regarding the making of this album before even having a listen had an immediate impact on me. Knowing that much of this material caused its creator, Sam Cosby, to really take a moment, or in some cases several days to reflect on the life, emotions and journey that has brought him this far…and that it wasn’t exactly an easy task, was really interesting to learn about. That honesty in the write-up I’ve read for his latest album The Book Of My Heart (Circa 1988 – 2015) is something you can certainly hear in the raw & realness of the music and lyricism. Musically, much of the approach to this album has a very vivacious feeling of freedom to it…it speaks to those that can truly let themselves go into emotion and atmosphere…the creative…the avant-garde… As much of an adventure through the psyche of Sam Cosby as it is the music itself, this new album is starkly unique.

Beginning with the warm, playful synth-sounds that start-up “Something I Haven’t Said,” this opening tune quickly puts that personal-relevance and emotional-tone on full-display through the lyrics. It’s mentioned in that write-up on The Book Of My Heart (Circa 1988 – 2015) that many of these songs were tough to write or finish due to the intense set of feelings and emotions that often came out in the music and words…and I think through the opening tale and how direct, honest & personal it seems, that we get a solid glimpse into an artist with something to legitimately say in this first tune twisted ironically to be called “Something I Haven’t Said.” At least that’s the theory I’m going with! A beefy-track length-wise at just-over six-minutes long – the music is a little jazzy, also a little scattered at points…like I said, very free-feeling. I don’t feel like I hear that any particular one set of rules would be applying to the methods or studio-time recording of Sam Cosby…you can hear from the intense drumbeats rolling all-over the map that the music is audibly going to take him where it happens to be going…and though he might have struggled to get these songs completed, from a listener’s perspective he sounds like he’s confident, enjoying himself and truly embracing this moment in his music career.

The timing and unique writing of “Day Dreams” is actually quite extraordinary. It’s spaced way-out but the slow-pulse of this song has some awesome ideas put into the vocals and sound of them through harmonies…and the melody itself is pleasant, inviting and clever in its hook. From what I’ve heard on this record, I’d say you could put Sam Cosby somewhere in the middle of bands like Go West and Zero 7 – which leaves him quite a bit of territory to roam through; and he does.

I hear a song like “I’m Still In Love With You” and I’m kind of awe-inspired…this is a truly-bizarre, yet truly fantastic composition! Nothing about this song makes any damn sense to my brain when I’m listening…and how it all eventually comes together and finds itself a massively addictive melody in the chorus…that’s extremely impressive really. Sam is clearly working on a musical-level that I’ve yet to reach…the amount of ideas packed into this ONE song alone are astounding…how they’re layered, how they mix-in together and how it all works is like trying to understand nuclear-physics as a child in the fouth-grade of elementary school; I don’t know how he’s done it on “I’m Still In Love With You.” My natural instincts are telling me the song is almost overcrowded with parts, fills & sound…but when I hear just how cleverly this all works and snaps together – what else can I say other than, ‘incredible job?’

Sam asks directly in the song to follow, ‘where is my mind?,’ echoing exactly what I was thinking myself when I was listening to “Secret Stories.” What a song! I’m literally confounded as to HOW to describe a lot of what Sam is doing…the pacing and beat behind “Secret Stories” would take an Olympian athlete to keep up with, yet because of the smoothness in the bass and vocals, this song actually comes out feeling, for the most part, like it’s actually somewhat mid-tempo, or nearly a slow-song! And that’s amazing! The lyricism again reflects the heavy-nature of emotions that Sam has encountered over the years inspiring The Book Of My Heart (Circa 1988 – 2015) some of them quite beautiful, some quite sad. It’s that contrast that exists between all elements of this song that I believe makes it work so extremely well – really digging “Secret Stories.”

“I Think” has a few lines that I felt were a little more standard and explored previously through music in the past, though I absolutely loved the song as an overall idea. The bass rumbling throughout the verse keeps it all intense as Sam rises and falls with the energy of the music through the vocals. Definitely a song that I felt had its verse outshine the chorus by a large margin – I love the additional free-floating sounds of the keyboards and subtle, clever drumbeat against that wicked bass-line. I think Sam has some of his most powerful moments vocally, but I felt like the words themselves had a little less impact on me in this one than they have in the previous tunes. I say whatever to me – it’s still a damn good song and extremely inventive in around the middle instrumentation heading back into the verse.

As The Book Of My Heart (Circa 1988 – 2015) begins its second-half with “Stratosphere,” the music brightens-up a little in the melody and atmosphere. Another inspired sound & tone through the vocals and lyrics…each of these songs have been so impressively unique from other music, but also from each other within the album; this is diverse & versatile stuff and truly shows the flexibility, range and ability to adapt to any environment from Sam Cosby. “Stratosphere,” much like any of the tunes on this album, isn’t going to likely hit the Top-40 radio-stations anytime soon with its widespread avant-garde nature and free-jazz aspects…but it might just find a comfortable home on your playlists. If you’re looking for something different that will truly keep you listening for all the twists, turns and tiny idiosyncratic & complex parts that musicians LOVE to hear – you’ll love this song and certainly the album itself as a whole.

The tenderness of the sentiment in a love-song like “Watersigns” comes through shining beautifully. I’d say this is a great example of Sam at his most intimately-focused…he’s put in a fantastic performance in the vocals here and really carries the message of this song through the melody in his voice. It might not jump out immediately to you in comparison to the more attention-grabbing up-tempo tunes on The Book Of My Heart (Circa 1988 – 2015) but it certainly has a valid place on the album and makes for a great moment to chill-out, sit back and think beautiful thoughts.

Always a congratulations to an artist that forces me to turn to Google to find out what the heck is going on lol…and I had to do that with “Syzygy Of Love.” I wasn’t just going to let the definition on that crazy word slide when this became one of my favourite tunes to listen to on the album! As far as I can tell…it generally refers to the connection between two; hence, the “Syzygy Of Love.” What I don’t know…is if saying that is going to help get the ladies or potentially push them away…this I don’t know. I’m trying to imagine it in a bar-scene: ‘Hey baby…you feelin’ this? That’s that syzygy of love between us…know what I’m sayin’?’ I dunno if that’s gonna work out Sam! But written within that scenario is also the true-evidence of how unimaginative and weak my own game is…so maybe that’s all on me. What I do know…is that I really dig the sweetness and energy of this tune’s melody. Perfect and truly one of the highlights and most accessible-sounds on The Book Of My Heart (Circa 1988 – 2015).

Can’t help but LOVE the bass-line driving the short & wicked opening and song to follow in “AN Evolution Paused.” The drumbeat is insanely paced and nearly makes this tune like a rad combination of pop, R&B and EDM all rolled into one. Everything about this tune is fantastically inventive and unique; the rubbery quality to the sound of the bass and to the vocals…the ideas themselves…everything inside Sam’s lunchbox is so different than what the rest of us bring for lunch – and that’s massively refreshing.

Ending with “Hello Goodbye” – you can hear a ton of the highlights that have made Sam’s music fantastic all-along this journey housed underneath this final-roof. The longest song on the record, the pace continues to have that wonderful contrast between the speed of the music and the vocals – I really think Sam’s stumbled onto a very signature style here with his approach; I feel like I could identify a Sam Cosby song out of a random playlist with a thousand songs on it every time it would come on – that’s how defined his stamp on music is here on The Book Of My Heart (Circa 1988 – 2015). Raising the bar one final time with the expanded ideas, stuttered & complex timing and fantastic melody included in “Hello Goodbye” – Sam has done everything right on this album to make it a completely memorable experience. Unforgettable for its blissful celebration of love, creativity and innovation in music, The Book Of My Heart (Circa 1988 – 2015) is an experience you’ll remember and want to repeat.

Tags: Album Sam Cosby sleepingbagstudios The Book Of My Heart