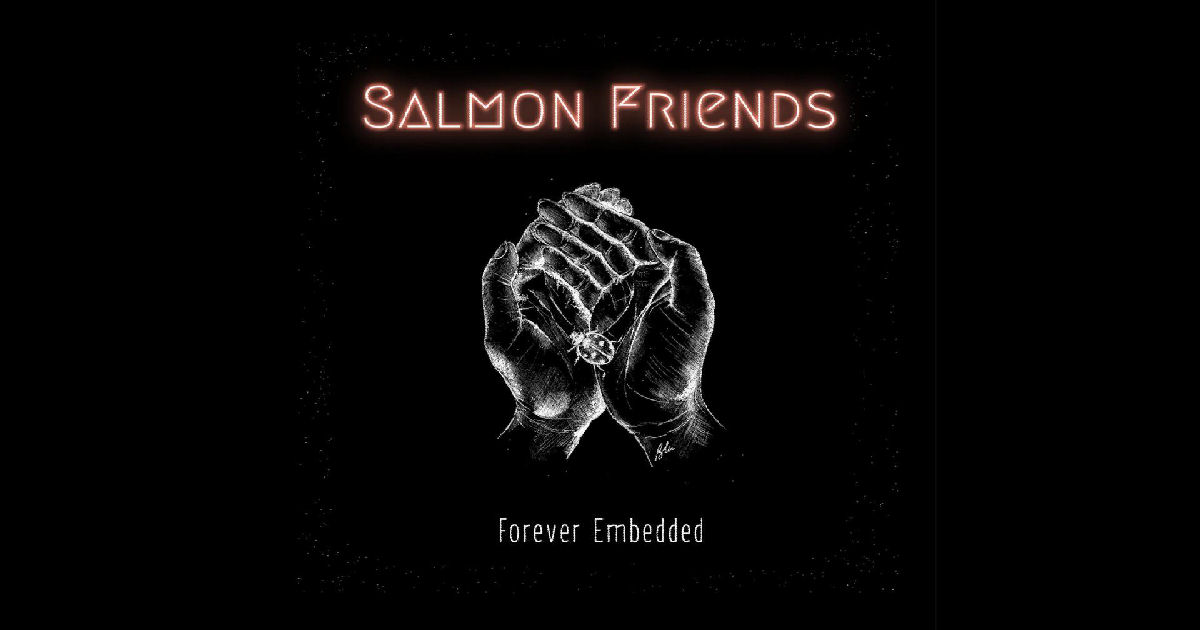 It’s been nearly a year & a half since Sam Caviglia put his stunning new project Salmon Friends out into the world officially with the first self-titled EP, which I had glowing remarks for…to say the very least, I’m absolutely ecstatic to have another record already so soon.  No reason to expect anything other than awesomeness when it comes to Sam’s music, dude knows how to put genuine character into his voice that really connects to the words he writes.  In my humble opinion, he’s one of those rare artists out there in the scene that has the ability to take an entire song to the next level with just a simple inflection of the tone in his vocals or slight crack in his voice.  Now settled in to the sound/style of Salmon Friends for the Forever Embedded EP – you can clearly hear how his songwriting has continued to evolve and the ideas are being fully explored with an impressive amount of attention to detail in the lyrics, melody, and musicianship.  In the world of artistic alt-folk – this is one project out there that absolutely stands-out to me – it has right from its very beginnings…the Forever Embedded EP is a confirmation that there really is something here…that it wasn’t just luck first time around…that his place in music is valid and he belongs.

It took me a second or two to figure out the vibe that “Stray Dogs” was reminding me of with its slight alt-country/folk sound…it actually ended up being “Between” by Jerry Cantrell for some strange reason, which makes almost little to no sense even to me…like almost to the point where I should just backspace & delete all that, but yet, here we are.  I suppose it’s something about the tender beginnings of each song and the way they sing them I reckon.  Whereas “Between” gets overblown from where it starts, Sam plays it cool and lets “Stray Dogs” stay in a gentle, chilled-out atmosphere with just the gentle acoustic melody of the guitar delicately framing the imagery in his words.  Like it could fit on the Into The Wild Soundtrack…that kind of sound.  He’s got a bit of drawl goin’ on with his vocals here, which does wonders to bring out the wild spirit & soul of this song, especially in that first when revealing the character’s personality in the storyline as it begins.  Likely drawing on his own personal experiences, thoughts, emotions, and insights – the sincerity of “Stray Dogs” drips from the strings of the guitar while the vocals carry this song to victory.  It’s a poetic beginning to Forever Embedded that really speaks to the amount of expression that Sam can pack into his words and into his vocals…when the song drops to its lowest tones, the transition he makes on the mic in the melody completely captivates – and when he packs the power into certain lines along the way, you can hear the heart & passion he puts into his performance.  It’s a short, sweet, humble, and observational intro into Forever Embedded that still gives the EP plenty of room to expand & grow from this intimate & isolated folk-tale that starts the record.

As far as title-tracks go…hell, as far as songs go period – “Forever Embedded” should make a valid claim for the top spot on your playlists.  Sam is straight-up magic here.  The dreamy vibe of the verse starts the song on solid ground, smart backing layers strengthen the sound as it builds, and then right around 1:15, you’ll hear one of the most immaculate transitions into a chorus you’re going to ever hear.  Not hyperbole – facts.  It’s not what many would likely consider a typical hook…it’s like a whole other deal…that rare kind of moment in music that only ever comes along so often in one lifetime.  Salmon Friends exceeds even the highest of expectations on “Forever Embedded” – everything from the writing to the performance is so insanely tight.  Sam MIGHT have to come to grips with the fact that he could likely pull off the world’s greatest Adam Duritz impression…but FUN FACT kidlets…at one point in time, Counting Crows actually made great music.  If you go back to their first two records, you’d find haunting sounds similar to the emotionally-intense & powerfully moving writing & performance Sam puts into this song, particularly the second record Recovering The Satellites.  Critics were already bashing them a bit at that point in comparison to their debut album, but as usual, they were proved wrong over time – the Crows second record was much better and held up much longer over time for its artistic perspective.  I’m off on a tangent here…my ultimate point is that at moments like around the 2 minute mark, Sam’s a dead-ringer for the expressive sound of Duritz in all the right ways…in that near-tremble where you can almost sense the rush of the sensation of making something extraordinary come to life run through him.  Ain’t never been anything wrong with that in my opinion…I think it’s moments like the chorus of this song where you can hear the true magic of music take over the controls, as if Sam becomes the vessel for the pure raw beauty & art to combine and funnel itself through his veins.  The verse is great, the chorus is undoubtedly one of the strongest I’ve heard from Salmon Friends, the solos are amazing & the tone in the guitars are absolutely wicked to listen to…EVERYTHING about this song stands out to the ears and pulls right at the heartstrings through the imagery in Sam’s words and emotion in his voice.  Breathtaking…jaw-dropping…time-stopping…like I said, no hyperbole here – you’re entitled to your own opinions but not your own facts, and that facts are plain & simple here – “Forever Embedded” is all-out amazing…spectacularly fresh, authentically sincere, and 100% as memorable as music can possibly be.

Not to drive the point straight into the dirt, but I don’t think “Forever Embedded” is just another good tune – it’s the complete gem and worthy-centerpiece of this EP and quite likely the best song I’ve heard from Salmon Friends to-date.  So therein lies the mountain Sam has to climb towards the end of this record now…there’s still two more songs to go and he’s just surpassed every possible expectation of the high-standard already set for this music & writing of Salmon Friends.  Does that cost “Garbage Below My Feet” a bit?  Probably…but so what?  There’s likely not a single song out there that could come after “Forever Embedded” and not have to fight for your attention & love by comparison.  Smartly, Sam dials-back the sound to just the lead-acoustic and his vocals once again, creating a separation in sound on the EP that will allow you to take “Garbage Below My Feet” in more readily.  Performance-wise, when it comes to the vocals, this is definitely another highlight performance…I still think it’ll take a listen or two through this EP to come to appreciate the contribution it makes to keeping this record flowing, but at the end of the day, I think all ears concerned will be able to recognize the extraordinary turn he takes on the mic here.  Talk about feeling the vibe!  That surging tremble in Sam’s vocals is compelling to listen to as he drifts between a melodic-chill and a rasp-filled venom, adding a bit of what sounds like old-school blues from way back subtly into the atmosphere, structure, and movement on “Garbage Below My Feet” – still a folk tune at the heart of it, but this entire song carries an added weight to it through Sam’s observational, thought-provoking, & questioning lyricism.  Were it not for “Forever Embedded” making the massive impact it does, I’m sure this performance from Sam would stand-out to people more quickly than it likely might end up doing, but regardless, it’s another completely solid cut from an amazing set.

If you look at the lengths of the songs and you listen to the way they’re recorded, you’ll notice you’ve got two-sides of the story here on the Forever Embedded EP.  You’ve got the more isolated and on-his-own sounds of “Stray Dogs” & “Garbage Below My Feet” and the more involved, longer songs in the EP’s title-track and brilliant finale, “Sunday School.”  The more I listened to this record, the more I appreciated both of its dimensions for what they bring to the Salmon Friends sound & style.  You can hear how ideas like “Stray Dogs” could become songs like “Sunday School” with additional players that might step onstage for a live performance…which is something that Salmon Friends has always been open to – and conversely, you can hear from the recordings on this EP that Sam on his own would be just as captivating to listen to without question.  The options & potential run just as deep as the material does when it comes to the music of Salmon Friends.  When it comes to “Sunday School” – that’s where those amazing players like Jordan Cunanan & Justine Marie are going to become key when playing this live, or at the very least get a backing-track of their contributions for a solo situation, know what I mean?  I’m sure he could pull it off with just an acoustic guitar on his own as he’s already proven time & again – but c’mon, the way the keyboards complement this song is straight-up ESSENTIAL!  Sounds like there’s haunting low-end strings in there as well…and the backing vocals also play an enormous role in providing the emphasis & punch to the lyrics as they strengthen with the power, emotion, and melody Sam sings this last track with.  Ultimately, I think the more expanded ideas like “Forever Embedded” and “Sunday School” are probably going to be the tunes that win people over the fastest, but make no mistake, Salmon Friends has done it again with another extremely captivating and rewarding set of songs to listen to from beginning to end.  Forever Embedded is verifiable proof that this project is continuing to get better & better…that this whole direction Sam’s taken his sound in is a venture worthwhile…that the magic really exists in the connection between the music, songwriting, and vocals…that Salmon Friends truly has its own identity…that it belongs here and has a certifiable future.  Everything I hear on Forever Embedded tells me that Salmon Friends is well on the way to establishing a foothold in the underground indie-music circuit and definitely ready to be called up to the majors at any given time.  People will seriously dig the depths this music can reach, and how this music will in turn, reach them.

Find out more about Salmon Friends from the official website at:  https://www.salmonfriendsmusic.com/