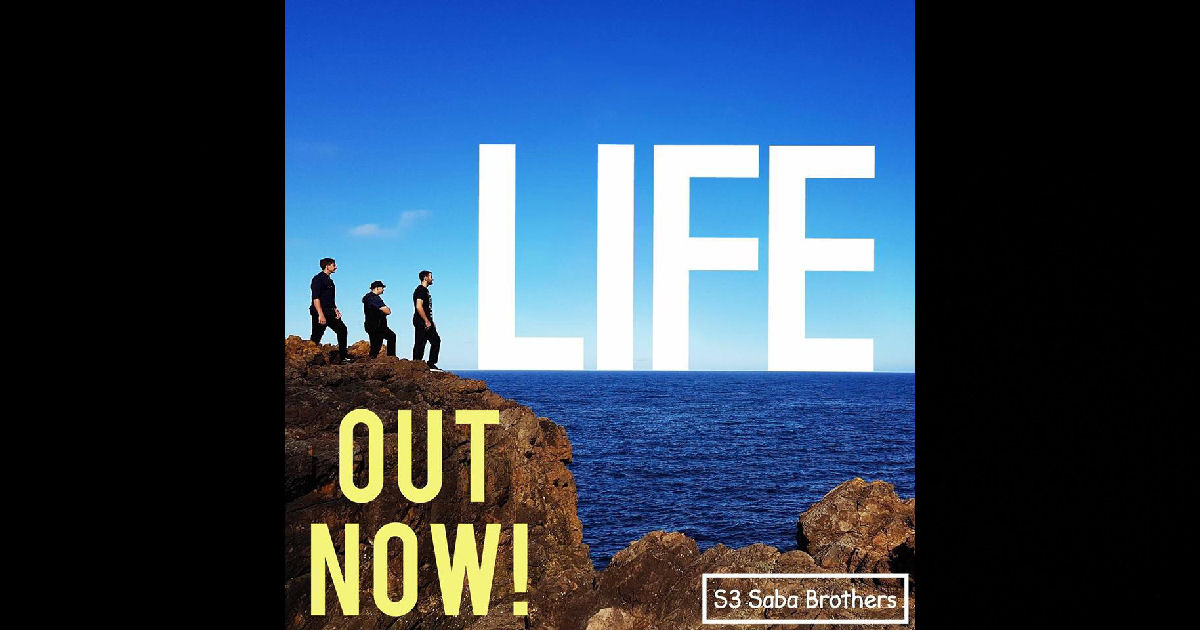 Talk about a tight lineup!  Three brothers, one band!

Probably pretty tough to crack into this band unless you’ve got biology working in your favor – but on the bright-side of things, they’ve clearly already got everything they need between the three of them.  The new single “Walk Away” from the new Saba Brothers EP called LIFE has the boys sounding pretty darn good I must say.

If you look at their listed influences etc. on social media, you’ll find a wide range of sounds, bands, artists, which would naturally lead the Saba Brothers into their own style that incorporates a similar scope & size as a result.  On “Walk Away” for example, it’s kind of a hybrid sound that mixes a modern bounce with a classic feel…something like you’d imagine a cross between The Beach Boys and Green Day would produce…where you get the Green Day style of movement, with the sweetness of The Beach Boys dictating the friendly vibe in the sound.  Also like those contrasting comparisons would create as one, Saba Brothers have made a song that’s got a completely fun and uplifting sound, but at the same time heavier content in the lyrics and digging deeper when it comes to the levels of this tune that contribute underneath its shiny surface.

I think the honors of the first impression from “Walk Away” belongs to Steven Saba, the drummer of the three brothers in the band; he sets that pace and gets the energy fired-up through the tom rolls and crisp snare snaps, constant kick-pedal and clever contributions overall – for a dude that listens to music all day, every day, it’s always noticeable when you find a drummer that’s not simply keeping the beat but looking to add to the music in other ways as well – and you can hear that in the music of Saba Brothers.  No doubt, being siblings and all, there’s probably a bit more freedom afforded to explore these kind of ideas in the writing – but hey boys, that’s gonna work to your advantage every single time it’s single-time, you feel me?  There’s likely a patience level in a band of brothers you just can’t match from the collaborating with strangers and forming a band outside of family or as close friends even – and it’ll be because of this, that Saba Brothers have the opportunity to take their music in several directions & find themselves an organically successful new sound as a result each time.  It’s confidence in those other two brothers from the perspective of the third, whomever that may be at the time, but it’s that reliability and knowing that they’ll always be there to back each other up – that can make a band bulletproof.  From the tight rhythm & roll through the alt-melody of “Walk Away” – I think you can already hear that Saba Brothers are well on their way to whatever they want to achieve in music & have the right ingredients to make it happen for themselves, as a three-piece, without adopting a fourth bro!

Beyond the drums, I think the vocals really stand out as impressive; part of that’s the smart melody-line that’s chosen for the vocal flow and straight-up good songwriting – but part of it is also that it’s a sincerely well-sung song that puts out the empowering energy & vibe that echoes the lyricism spot-on.  Not entirely sure which of the brothers that is in the lead, whether it’s the safe-bet of Raymond Saba (Guitar, Vocals), or Nathan Saba (Bass, Vocals) – or heck, it could still even be Steven from back there on the drums, who sings in this band as well!  Guitar and bass are bang-on where they need to be & no complaints there…they really move and transition as a tight unit…naturally, as many would assume that three brothers would.  “Walk Away” is bit on the bright & playful side of sound ultimately – but it’s that same charm and appeal in this shiny sound that’ll attract a whole lotta listeners out there from all over the place…they got solidly universal vibe on this single that’ll grab people’s attention for sure.  Personally I dig the instrumentation just as much as the vocals in many spots…the guitar work in this cut is pretty clever when it comes right down to it, filling in the verse with really smart additions that complement the energy and keep the sound of this song sharp.  And then like, the Weezer-esque breakdown & build-up around the 2:30 mark before bringing it back to those big bouncy hooks again?  Genius moment and a great sound there as the sound envelops you and the intensity sets up that strong, triumphant stroll through those catchy hooks one more time.

Officially formed in 2010 – it’s gotta feel good to get their debut EP LIFE out there and into the world for all to hear.  “Walk Away” is a great way to entice people into checking out the rest of what the Saba Brothers are up to…it’s definitely a diggable tune and a solid gateway single into the rest of the jams from S3…so if you like what you hear, you know the right thing to do – check out the full EP – I did!  They’re up to good stuff on their new record…and LIFE marks the beginning of an all-new chapter…they’ve already put out a new single called “Smile” since they released their new EP – I mean, c’mon – that’s work ethic!  Demand and supply even!  Keep demanding it and I’m sure they’ll always be ready to supply – as they’ll tell you themselves as direct as possible right there on their website:  “Music is our life.”

So it was written, so shall it be.  On your way then gentlemen, go forth and conquer.

Find out more about Saba Brothers at their official website at:  https://www.s3sababrothers.com