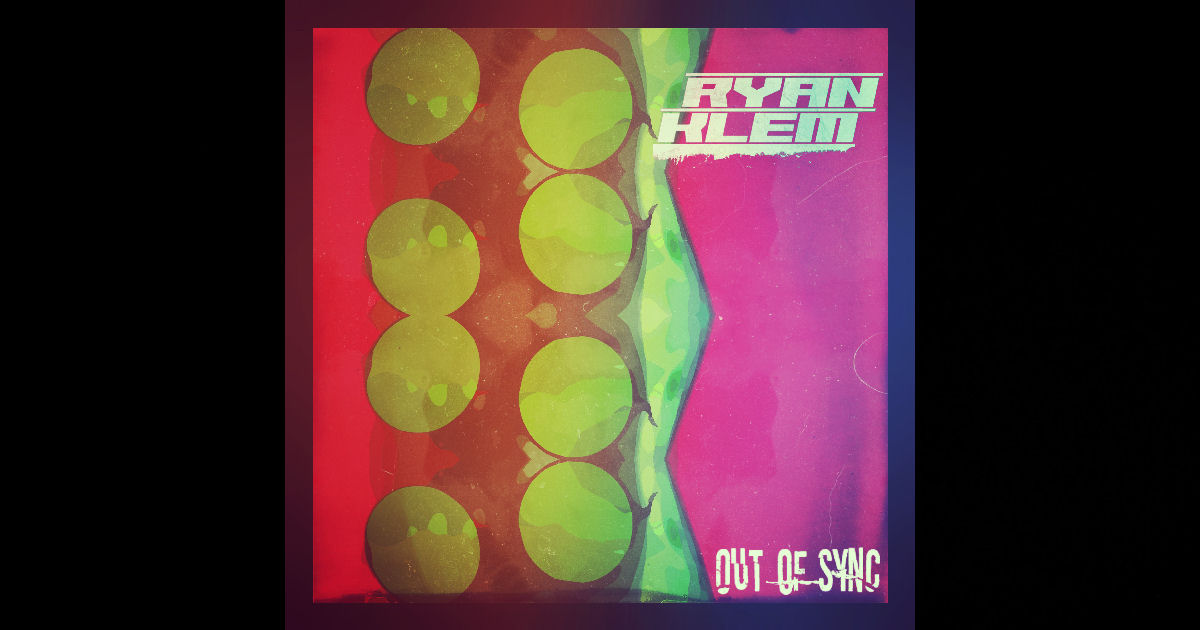 Eclectic Klem, back up on our pages for the third time this year already!  Well done sir, well done.  Always awesome to see & hear the music flowin’ and the inspiration on-high…though I’d surmise that there’s probably not too many points in life where you could run into an artist like Ryan Klem and find him dried-up for creativity…this guy is 100% always up to something…and you never really know what.

Except for the fact that he & the surrounding crew are complete credit-hawks, so let’s get that stuff out of the way at the beginning here.  “Out Of Sync” is Produced / Arranged by Joshua Rumer of Invengo Productions, performed by Ryan Klem, mixed and mastered by Atom Smith.  There.  We all feel better.

I’m just poking them in the ribs a lil’ bit – this crew knows I admire & respect their talent and they deserve the credit for the creativity they all help pump out into the world.  “Out Of Sync” is another solid example of that endless well of imagination & creative-freedom that Klem taps into so frequently, using his gifts for exploration & melody, diving deep into an introspective tune that gently taps into orchestral elements and a sweet acoustic-based sound that fuses Indie, Folk, Pop, & even a hint of Jazz.  Absolutely loving the way the song exits the verses and uses the strings & piano melody to guide that moment to complete victory…it’s just a tiny fragment of the tune ultimately, but a magical spot in “Out Of Sync” that sets up a really serene atmosphere before Klem surges on into the more rambunctious hooks of the chorus.  A lot of what I really dig about this new single is just how much is involved here, I’ve had several moments of listening to “Out Of Sync” where the drums would stand out, or the smart keyboard melodies, the haunting string sounds, smooth bass-lines…everything in the music gets its own significant second or two in the spotlight for you to appreciate and the performance here from Ryan all on his own certainly merits a high-five or two.  Vocally, dude holds his own pretty well throughout his new single; a bit of audible fragility perhaps, but also some highlights for strength to be found in the chorus of “Out Of Sync” – the additional energy in the atmosphere clearly inspires him to reach the best of his potential when it comes to this tune.  As for the quaint & inviting way he sings the rest, I ain’t complaining…Ryan tries so many different things when it comes to his music, that’s always what I admire most…and it usually works out in his favor, like it has here.  Songwriting/lyrics-wise, I think he’s also put some good stuff out into your speakers with “Out Of Sync” – he’s put some thought-provoking words & imagery into this cut, and structurally, you’ll find a lot more goin’ on here than a mere verse & chorus combo.  Somewhat to be expected from an artist with as much passion & genuine love of the craft as Ryan has…one of the greatest things about his music has/always will be the sincere effort he puts in & the pure joy you know he gets out of being artistic, which is certainly something we can hear.

“Out Of Sync” has a pretty friendly vibe for a song that has a whole bunch of lines musing on our existence & the end of the earth , that much I can tell ya for sure.  Ultimately, I think the pleasant vibe & contrasting lyricism will give the hearts & minds a lot to chew on as they ponder this unique creation from Klem.  Hooks of the chorus are strong for sure…but I also think that the gentle & appealing sway of the verse has about just as much chance of pulling in a few ears to listen…multiple dimensions of sound & access points for the people out there to find their way in to the music is always an advantage…gives it all that good-good crossover potential you want in a single.  It’s the excellent selection of instrumentation & sound that pulls me in the most personally here, but all around, Ryan AND Josh AND Atom have put together a solid single with “Out Of Sync” that gives ya plenty of expressive melody on the shiny surface of this tune, and a whole lot more to discover in its depths the more you dig into it.

Find out more about Ryan Klem from the official pages below!