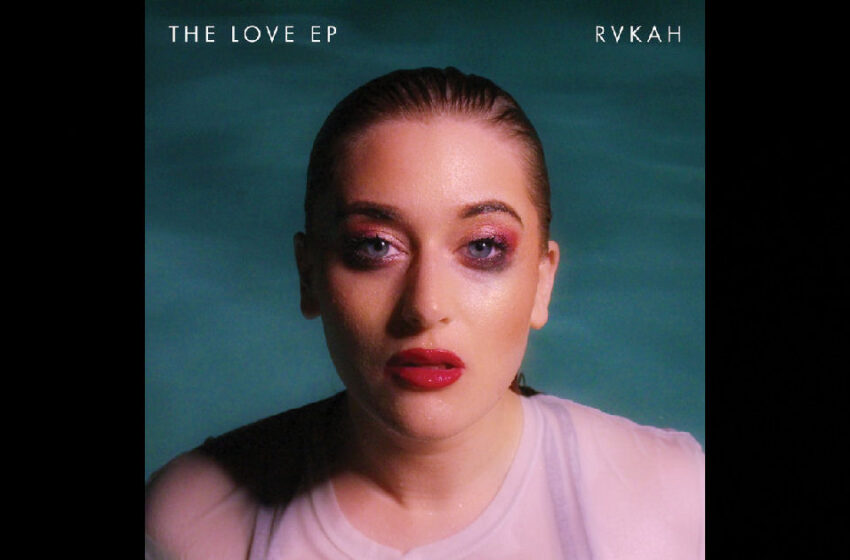 I mean…I suppose I get it to an extent…I can hear why those artists have been listed in comparison to a degree or two, despite how uninspired & effortless those comparisons might appear to be.  They’d be easy comparisons to make for the scope & scale of Rvkah’s potential in becoming a worldwide superstar – that I can get behind for sure; it’s crystal clear she was born to be a game changer.  And no disrespect to good ol’ Madge or Brit-o either…they’ve earned their badges of honor and certainly helped blazed the trail that Rvkah is thriving on with her own career today…they both make good tunes and there are literally millions across this globe that would testify to that fact without needing my opinion at all.  I’m just saying I pretty much already like what I’m hearing in Rvkah’s music 100% better – is that really all so bad?

THIS incredible lady…I mean…c’mon now – artists like Madonna and Britney are her freakin’ PEERS if you ask me, based on what I’ve heard in these two singles that come from Rvkah’s latest release, The Love EP.  And here’s a Fun FACT for ya – Rvkah released her first AWARD-WINNING album when she was only TWELVE YEARS OLD.  Take that in for a moment, and ask yourself how hard you’ve been pushing your own music-career for a second or two eh?  She’s graduated from the Berklee College Of Music now, and clearly, she’s spent her entire life completely focused on the dream of becoming a worldwide sensation.  I’ll tell ya this folks – the determination you’ll read about in her bio alone, along her many achievements, would tell ya she’s already an incredible success – but it would also reveal that she’s got everything it takes to succeed even more massively in the future to follow as well.  Essentially what I’m tellin’ ya is, if it just came down to work-ethic & commitment alone, I’d still have bet on Rvkah to go the distance – but the real reality is, she’s got mind-blowing talent to match all that, ounce for ounce.  Listening to these two tracks “Love” and “Slow Down” was simply confirmation of what so many people out there around the world already know to be true – Rvkah was destined to be a genuine star from the drop of day one.

She doesn’t need to be a Madonna or a Britney Spears – she just needs to be herself, and she’s got this.

Am I partial to one of these tunes more than the other?  I suppose there’s an answer to that…we all have our favorites & what we like – but make no mistake, we’re splitting the slightest of hairs here when it comes to picking between “Slow Down” and “Love” – these are both spectacular songs and a fantastic representation of the confident & compelling artist that Rvkah has blossomed into.  “Slow Down” would have just as much in common with something like Owl City as it would with Madonna or Britney, if not more-so…that combination of soulful sincerity, brilliant melody, and evocative electro-infused sound – I mean…it’s staggering how powerfully endearing the stunning vocals of Rvkah truly are, and how much of a genuinely memorable impact she makes with her music & the remarkably beautiful voice she has.  Savoring the moment, “Slow Down” is all about wanting to make love last just a little bit longer, and find a way to satisfy the needs of both parties involved in the present, while also trying to navigate & not damage some kind of potential future either.  More or less, Rvkah taps straight into the push/pull of life, love, thoughts, and feelings with spectacular accuracy and sensational sound – ya can’t really ask for more than what you’ll find folks, I promise ya that – it’s as insightful & real as it is vibrantly entertaining.  BIG hooks that are flawless, and a star that truly shines with every syllable she sings – it doesn’t take more than a mere flash of Rvkah’s vocals & fifteen seconds into this song for your ears to recognize & realize just how special what you’re hearing really IS.  No matter what she’s already accomplished and how much she’s already achieved – “Slow Down” confirms that Rvkah is capable of conquering the charts & playlists around the globe with songs that’ll hit ya in the heartstrings with an emotional punch, and yet have you reaching to turn’em up at the same time.  You gotta love it – I know I sure did, 100%.

Speaking of “Love” – what on earth ISN’T to LOVE about this other single right here?  Don’t get it twisted & don’t get me wrong…on a songwriting & performance level, you’re not going to find faults in either of these tracks I’ve got in review right here – but if we’re talking about universally accessible vibes & straight-up single-worthy sound…I mean…I think you gotta give it to her EP’s title-track hands down.  “Love” isn’t JUST a great song – it’s absolutely irresistible in every sense of the definition.  I don’t know what garnered the awards Rvkah won long ago when she first started out, but my ears can certainly recognize the sound of a song that should be winning more for her here in the present, and this is that.  “Love” has a spellbindingly beautiful vibe to it, and hooks that radiate from the verse to chorus & everything you’ll hear in between – no joke folks, this song is all the confirmation any set of ears would need to hear & know that Rvkah isn’t just destined for a solid career – she’s destined for true greatness.  If you wanna hear what it sounds like to get every morsel of potential out of a great song, “Love” will spell it out for ya from the lefts to the rights…Rvkah gives this single all the sweetness & heart it needed with its contrasting lyricism, mixing it up between a desire to be closer and trying to just enjoy the journey through life & love.  If anything, she’s looking for things to speed up in comparison to the way she felt on “Slow Down” just prior…but hey, different relationships, moments in time, people, and personalities…it’s all unique, you feel me?  Each situation has its own pulse & rhythm we try to adapt to.  Personally I really liked the fact that Rvkah expresses both sides of that scenario between these two songs, because that’s really what “Love” is all about, and especially the pursuit of it – sometimes you want everything to move at warp speed…sometimes you want things to “Slow Down” so the moment lasts a lifetime…and chances are, no matter how it is you’re feeling, you’ll still want it to be something different somehow.  The real key is to enjoy the present and give it everything you got folks…trying to control the speed of love is pretty much impossible, and its natural pace leads to the strongest results – take it from an old grey-beard like me that’s been happily married for the past nearly thirteen years & together for four more.  I don’t need to tell Rvkah – she gets it – you listen to the chorus, you’ll hear she knows exactly what she wants – and in my own expert opinion, she should never settle for anything less.

Think of it this way y’all – it took two songs to convince me of Rvkah’s undeniable talent – and if I’m being entirely honest with ya, it was much less than that – the same fifteen seconds into “Slow Down” I referred to earlier was just about all I needed.  The point is that, I’ve been doin’ this music review thang for a very long time now…those of you that read these pages know, I ain’t here to pump tires – I’m here to tell it like it is and help represent the truth about what you’ll hear in the music in the independent scene we share together.  So take it to heart when I say, Rvkah is no ordinary artist by any stretch of the imagination whatsoever – there is no limit on what she can go on to achieve, and I’m confident she’ll conquer every goal she chooses to set for herself along the way, from creating award-winning music, to finding “Love,” to entertaining millions of listeners with her magnificent Pop/Soul sound…the sky ain’t even the limit for the combination of potential, talent, and vocals she has.  Dream BIG Rvkah…you’ve got every reason to.

Find out more about Rvkah at her official websites below!