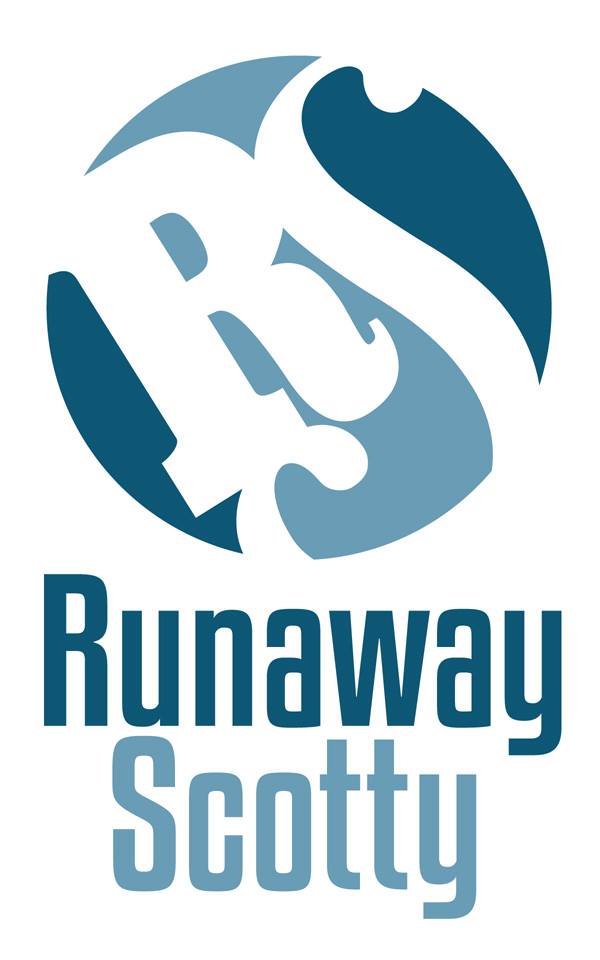 Doesn’t matter what the genre is really…as soon as I find out I’m listening to something potentially before the rest of the ears out there in the world, I slip right into that kid-in-the-candy-store mode or like I’m opening up a present on Christmas. Absolutely one of the best things about reviewing bar-none, and always an incredible honour to be able to listen to someone’s music before the track-listing is even set in stone! That’s right – we’ve gotten our hands on the new album from Runaway Scotty before the packaging has even printed and the strings of the guitar are still ringing in the studio – it’s THAT new.

I’ve always been perplexed at where music like this truly lives in our modern day and age. You could say that of all music that has a soft-rock edge to it like you’ll find in the track we started on called “Pool Of Love;” bands like Coldplay, Snow Patrol, Keane, The Killers, Pete Yorn that all have aspects to their music similar to Runaway Scotty…sometimes it makes me wonder where they ‘fit’ into the radio-scene and mainstream. I think bands and artists like these have that ability to change our perception of ‘what’s cool.’ You know what I think is cool? Great song-writing. Period. It doesn’t matter what genre you’re in – write a killer song or killer album and believe in every note you play & play them like your very life depends on it. That’s how those bands convinced us that ballads and emotional pop-rock & folk-rhythms could own our stereos in the midst of summer just as easily as the loudest of rock songs.

And that might very well be how Christopher Scott Carter, the man behind will convince you too – the songs on his debut album Rock My Heart are full of genuine hooks that feel like they’ve lived inside of you for years just waiting for someone else to express them somehow. You feel like you recognize these warm tones without being able to pinpoint a single melody to anyone other than Runaway Scotty’s own catalog – and if that isn’t the sign of a fantastic songwriter I have no idea what else could be. There is an audible magic to what Runaway Scotty is making…a real beauty of the pursuit of pure melody that I personally admire.

To think that we’ve still got an ‘unfinished’ copy here in this pre-release review…you should see the smile on my face! Whatever’s ‘left to be done’ has gotta be pretty minimal from what I can hear…this is pretty damn perfect almost all the way through and as far as my ears are concerned this is entirely ready-to-roll. Truly very little I’d see myself wanting to change in these big-anthem hooks…Christopher Scott Carter is going to be a name I already feel like I’ll be hearing from other people in the not-too-distant future to come.

Truthfully as my own mix of these songs starts through its playlist yet again over here at sleepingbagstudios – I begin to realize that “Pool Of Love” which starts the order or my list might very well be the track that resonated the least strongly with me. Despite the hooks being solid and the singing spot-on…at this point my brain already knows that “Change Change Change” is going to spring up on this list the moment it’s done. To me the opening of this cut could easily be the first track on Rock My Heart’s official finalized track-order; with the fantastic energy and uplifting vibe in both the lyrics and music coming together as perfectly as they do – I can’t imagine a better introduction into the music of Runaway Scotty. The chorus on “Change Change Change” is one of the absolute strongest on this album and honestly just soars with pop-rock beauty in an authentic melody delivered powerfully moment after moment as it changes and switches its parts.

Songs like “Lose Control” really show what a singer that Christopher Scott Carter can be…he holds notes with a professional’s approach and puts out perfect tones inside these gigantic hooks. If anything I can hear that MAYBE this might be one of the tracks he wanted a bit more time with, but certainly not for the writing – that works just fine as it is. I’d go after the mix on this one just a little bit more…that first punch into the chorus sounds a little thin musically compared to the impact it might supposed to be carrying…maybe a little more low-end groove in there might just give it the punch that it deserves. As it stands – “Lose Control” still possesses some of the most addicting hooks in the set and definitely should convince you already of this dude’s ability to write memorable melodies.

And guitar! Oh man do not even get me STARTED! Okay…maybe just a moment or two spent talking about the RAD solo and guitar-work you’ll find in “Lose Control.” It’s as inventive as it is well-played and let me tell ya – that’s precision work right there so you best believe the sound itself is plenty creative. Similar could be said of “Rome Is Burning,” which has immense classic-rock vibes grooving throughout the melodies and harmonies; that track definitely finds a way to build upon itself in tremendous ways. Wasn’t sold on it as it started, but by the time it ended Runaway Scotty had convinced me to buy in to his direction and ideas once again.

With the playful piano, gorgeous vocals and melodically-strong chorus – “Anyway” is certainly one of my favourite tunes for the confident approach and strong set of hooks. Like someone crossed Snow Patrol with Better Than Ezra and added a pinch of the serious end of Ben Folds…rare as those moments can be for that dude – but that gives you, or should give you a real glimpse into the real knack for melody that Christopher Scott Carter has and incorporates into his music. The vocal-flow of “Seriously” would be another great indication throughout the verse…but all that aside for a moment – LISTEN to the attack on that chorus from CSC! I dig the way he lets the beast loose fully and rages into this chorus after bringing it down just slightly to let the music burst brightly into an epic explosion of all-the-sounds-I-want-to-hear-right-now. Completely effective mix on this tune and damn flawless if you were to ask me.

I swear there’s a real tenor capable of opera and all the theatrics that come with that style in Chris. Listening to the focus and commitment he has on “Far Behind” makes it all a little more serious and personal…the struggle documented in the lyrics is one you truly feel has hit its author hard. If anything…I could see this one maybe not being the one that hits people instantly first time through Rock My Heart – but it very well could be the track the holds up the longest over time; maybe a little smoothing out on the corners of a few lines throughout the song…but again, not much I’d touch here either. Tremendous instincts in song-writing here…I’m glad no one’s over my shoulder making me count the hooks because this album and “Far Behind” in particular have too many to count.

The shortest song on the album clocking in at just under four-minutes long, “The Circle” has a beautiful slow-build to it. The presence of bass really makes itself known with a strong part that really brings the rhythm out in this melody…then the drums start in and this whole track shifts into another gear entirely. The vocals roll smoothly out and fit tighter into this track somehow…he’s found a spot-on mix here as he makes reference to the album’s title within the lyrics and delivers these hooks with an uplifting spirit and audible confidence.

For me…”Follow You Home” was maybe not the strongest tune on the album despite loving the sentiment of the lyrics. I dunno…you see…that’s the thing…there are INCREDIBLE parts within each song from Runaway Scotty…there are perfect moments in “Follow You Home.” I love the breakdowns in this song…I think it’s just the overall tempo of the main parts of this song is just one that has never really yielded too many songs that give me that emotion in the melody very often. I’m a sullen & melancholy melody guy…slow if I get my way when it comes to this genre.

As if on cue to support my feelings on this subject, Runaway Scotty takes everything down and strips the beginning of “Long Way From Home” to a simplified piano, voice and gentle guitar combination. The singing is fantastic and there’s an interesting dynamic between some lyrics I found to be really strong and a few that I felt drew upon some ideas that have been done – but in particular, right around the two-minute-thirty mark (ish) the melody opens up gorgeously from here towards the end in what becomes my favourite performance from Christopher Scott Carter on this entire album. He’s doing some extremely creative things with his vocals and it’s a sound and style I would absolutely love to hear him explore more of. So what if I’m not looking for another dance-floor hit – that’s what I’ve been saying all along from the very beginning here – I’m a fan of GREAT song-writing and what I hear in Runaway Scotty is more than commendable and completely worth every moment I’ve spent.

Ending the order that I have these songs in, is the last tune “Show Me The Way To Heaven,” which I’m certain would be a definite closing track if the finalized line-up doesn’t have “Long Way From Home” bringing the album’s end to a different direction. These are all theories…but in the order I have it – MAN is this a perfect ending; it’s like a blend of Midnight Oil and U2. I mean…CSC brought out the U2 staple guitar-sounds on this tune…really doesn’t matter who you are or what you do with that effect – the comparisons are always going to jump to U2 in a listener’s ear proving that you might not be able to copyright a sound but man can you sure OWN one in music. Regardless of comparison – this is a powerful last song on this early-playlist I’ve purloined and for myself, I wouldn’t have Rock My Heart wrap up any other way. I think the order & layout are all strong, the songs themselves have so many hooks that if you put this music in the ocean you’d potentially catch all the fish with no net & just the sounds of Runaway Scotty. Really impressed with what Christopher Scott Carter has done with this album from writing to performance and the guy should be proud of himself for what he’s achieved here.

And hopefully when the ink is finally dry on the liner-notes of the album he’ll send one our way – I’d love to hear the finalized version of how this all comes out!

Find out more details on Runaway Scotty and be the first to know when Rock My Heart is officially available by checking out these official sites: