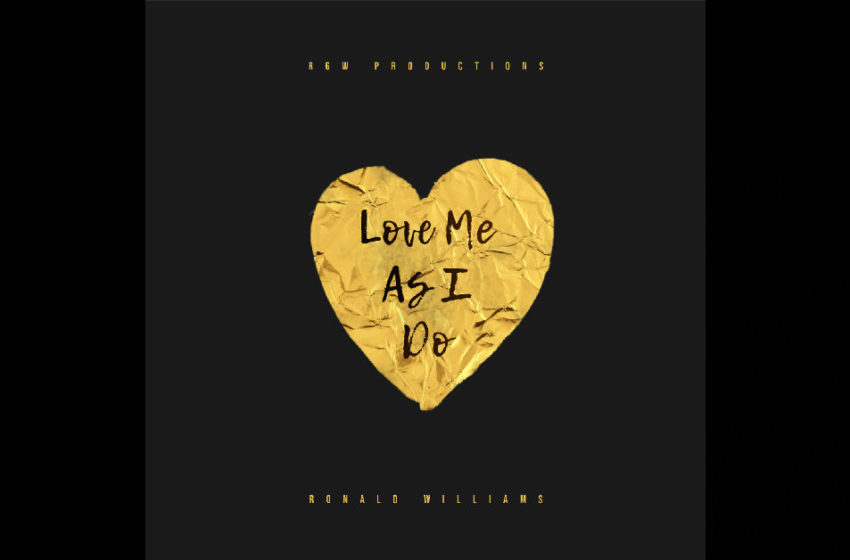 Ronald Williams – “Love Me As I Do” – Music Video Release/Review

Here’s what I can tell ya…Ronald Williams might not have had the most organized career from day one, but the material has always been there.  For example…this single “Love Me As I Do,” we originally reviewed back in October last year; it’s now got itself a spot on RW’s upcoming Funk Avenue album.  Sounds pretty straightforward right?  Just keep in mind, I’m not talking about the Funk Avenue album we reviewed back in January before we even heard this single made later on in the year for the next Funk Avenue album that’s coming out soon.  Following me now?  It’s a little confusing & hard to keep up with…but I can only imagine Ronald is going through something similar on his end as he tries to navigate the scene and establish himself firmly in the scene & use his uniqueness to his advantage for his career.  And don’t tell me there’s not a whole bunch of you reading this that can’t relate…it can take a ton of juggling, tweaking, and fine-tuning before launching your music out there into the world in the exact way you want to present it and have it heard – many of you out there certainly know that’s the truth.

Now here’s what I can also tell ya…I’ve always thought this was a great song from the moment I heard it.  Having reviewed RW’s music here at our pages many times over the years, I felt like “Love Me As I Do” really brought the heart out of this artist and put it right on the surface for all of us to hear beating as he sings this song.  As sweet as “Love Me As I Do” sounds, this cut digs deep into the pain as Williams examines the flaws in our society and the way we tend to treat each other as shared residents of an entire planet…and believe me when I say, he definitely ain’t wrong in his assessments.  And I’d imagine if anyone had any doubts about the natural tendencies of human behavior and how ugly they can get, this whole Corona-virus dealio has probably lit up that darkness a lil’ too much to be forgotten now.  That being said, let it also be remembered that there have also been numerous examples of people all around the globe, artists & otherwise, that have discovered a shared humanity like they’ve never before experienced…and that’s a truly beautiful thing.  “Love Me As I Do,” on one level or another, ends up dealing with these themes in evocative & thought-provoking ways – and ultimately, this song serves us all as a bold reminder to choose love over hate, right over wrong, to not judge each other, and to be kind to one another.  I mean, look…even if Ronald’s music is outside of your genre of personal choice with his soulful & melodic R&B/Pop style at its most delicate on “Love Me As I Do,” you still at the very least gotta admire his sentiment.

And regardless of anything I said at the beginning about the whole timeline of his career, the facts are, the world could certainly use a song like “Love Me As I Do” right now.  Reflecting the current state of things and documenting our existence has always been an important aspect of art’s role in our lives, and you’ll see that RW’s taken that extra step to tie-in the overall themes at the beginning of the video for “Love Me As I Do” before launching into a direct-to-camera performance of him singing the song after.  Honestly, for many of you artists & bands out there this would be one of those ‘don’t try this at home’ style videos to make…but don’t get my words twisted, I mean that in the best of ways.  First & foremost, it takes a ton of confidence and courage to put yourself out there like this; even though we’re safely behind a camera when we make a video, we never know how many people out there are gonna view it afterwards…and to be the sole star of the show is a difficult task for anyone in the day & age of being tried in the court of public opinion.  So check that box.  Secondly…he’s got the right style of music for a video like this – obviously you’re not gonna get away with this as a Punk band, but it would be tough for most artists from any genre.  While it might appear somewhat like an extended selfie – that too is a reflection of the words & meanings of his song on some level as well, which gives “Love Me As I Do” kind of a hidden Easter-egg aspect of tying in what you hear to what you see.  Intentional or not, who knows – maybe I’m reading too much into it all, but everything seems to fit to me; it’s not complicated, but it’s still got a satisfying complexity to it that you can dive in as deep as you want to…and of course I always do.  Lastly, I’d say that one-on-one feeling that you get from watching & listening to Ronald sing “Love Me As I Do” also gives these words he’s written a stronger chance to sink in to the hearts & minds of those listening.  Because he’s right there in the room with us and he’s the only thing at all visual in the frame aside from the wall behind him and the seriously stylin’ jacket he’s got on, you can experience that genuine desire Williams has to connect to listeners through his music and authentically see the passion he has for his craft as a singer/songwriter by the way he performs.  It’s always a very fine line to walk when it comes to making a video…hard to find the right balance where the visuals don’t take away from the song, especially when you’ve got a strong single like “Love Me As I Do.”  I think he’s played this the right way by giving you a glimpse of what the man behind the music is like without taking anything away from the core mission, which is to have the song & words he’s singing, truly heard, listened to, and considered.  Hopefully its songs like this that change a few minds or make a few more people stop and think about how we relate to each other…Ronald’s on a journey to restore the soul of the planet and unify us by reminding us that “we bleed the same blood” and that we’re all in this together, always.

Find music by Ronald Williams at his page at Soundcloud:  https://soundcloud.com/user-350097326

Tags: Love Me As I Do Music Video Ronald Williams sleepingbagstudios