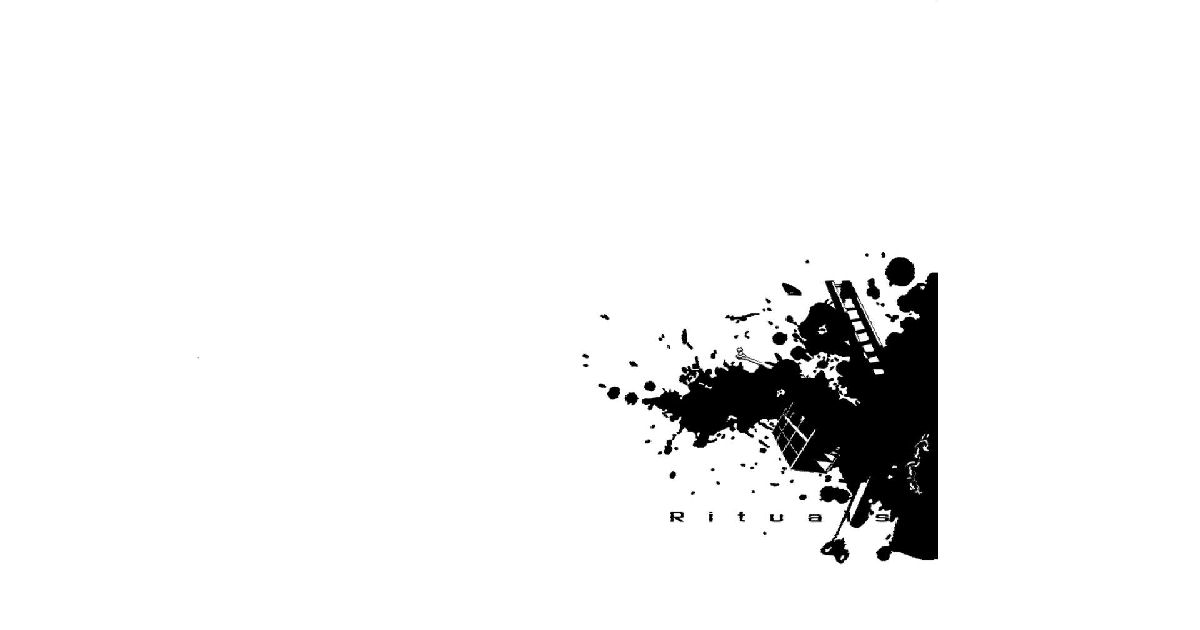 Here’s a name you might recognize – Roman Kharkovsky!  We’ve spent a good portion of this week reviewing his music, which started with checking out his 2013 record Tales Of Kharkov Through The Eyes Of My Nightingale, and eventually led to us picking his brain in our most recent interview.  We’ve got his music coming up on the next episode of the SBS Podcast, and here we are again, happily spreading the word on the experimental/ambient music he’s made on the album Rituals.

Alright…so…gonna be somewhat difficult to follow this review, because all the tracks are “Untitled.”  According to legend, this entire project & album was untitled originally, until Roman looked back on it and decided these songs belonged in the Kharkovsky catalog.  After listening to Rituals and checking out the more recent record Tales Of Kharkov Through The Eyes Of My Nightingale, I can definitely understand why he felt that way – these songs fit right in to that whole atmospheric & subtly-intense vibe.  Take the first cut on Rituals for example – a twelve-plus minute epic opening that at times sounds like you’re getting bombarded by an avalanche roaring down the mountainside, and at others, remarkably placid, serene, and peaceful.  The first “Untitled” song on Rituals makes incredible use of its space & length; Roman shifts the sounds through this track slowly and expertly, giving it that signature Kharkovsky touch whereby the transitions happen so cleverly under the surface that you’ll have to really pay close attention to it in order to hear just how much is actually happening.  That’s part of the magic in this ambient style Roman’s created for himself…he’s not looking to create flash & dazzle so much as he is clarity & imagination combined – and I think he’s done another great job of that on this mammoth opening tune.  That rumbling of rocks, or whatever that may be…is such an oddly comforting sound when you hear it…definitely an unexpected twist in the song in general, but what’s also unexpected is how enjoyable that effect becomes.

As for the second track, it seems like Roman has taken us straight into the Batcave here.  It sounds like a circling fury of otherworldly or animal-like communication, blowing in the wind or white noise.  Again – for you audiophiles out there – what Roman does, he does exceptionally well – the clarity & quality, texture, & tone are all there.  Crank a song like this up, open a window & let the breeze blow around you, close your eyes and drift away…the entire experience will become so real you’ll feel every hair on your neck & arms stand-up when the wind hits you.  I loved the morphing of these sounds over the course of this song…while it starts with what sounds like constant animal chatter almost, it blends itself deeper & deeper until it resembles the howling of the wind at its most extreme.  For those of you looking for a verse & chorus – all that stuff has been blown away – they don’t exist in songs like these; this is for the people out there looking for something decidedly different – something of which Roman is more than happy to supply.  Nature sounds begin to creep in as the wind finally begins to relent and the peace of the day begins to break through…again, the transitions and steps taken to get from point A to point B are quite remarkable.  By the time you realize you’re in the thick of the storm, you’re on your way out of it…and all this happens over eight & a half minutes, so it’s not like the sounds are flying by at a rapid rate physically – but sonically they sure are!  Love what Roman is able to achieve in minimalism.

The third “Untitled” track digs deep into the dark & subtly-intense atmospheres that this artist is so brilliantly capable of creating.  With its slight electro-infusion sounding like circuitry & computers running through the background, it’s almost like the wildest scenes of something like 2001 A Space Odyssey coming to life.  It’s songs like these that are the reason that Roman gets asked about doing soundtrack work all the time – because this is an atmosphere that would heighten the tension in any onscreen moment.  As it stands, with just the visuals you’ll imagine on your own, whatever they may be, that’s already probably intense enough for you – something about the unsettling nature of this third “Untitled” track from Rituals also got my heart racing a little bit quicker than the rest.  But I dig that…there’s an audible menace in the layers of this tune that’s as scary as it is exciting to listen to.

And then like…SEE – this is why listening to this stuff Roman creates is so cool, because it makes your brain think of SO MANY things at once that you have to interrupt your own sentences as a writer just to express it all – but like…on the fourth cut, he takes you right into the underground.  I mean it!  For anyone out there that’s ever ridden on a subway, or if you’ve ever been like, in one of those aquariums where you can hear virtually every slight sound around you amplified by the silence but muted from the thick glass encasing the water-creatures – then you’ll know exactly what I’m talking about and why that reminds me of the 4th song on Rituals!  If you haven’t ridden a subway, or been to an aquarium, I’m sorry – you’re out of luck for my comparisons on this song and you also clearly need to get out of the house more often.  All jokes aside – again, I love this kind of stuff…because it really does force you to come up with your own story & scenario behind what you hear…and where any of these tracks may take YOU in your mind could be entirely different than what roams through my own dysfunctional & short-circuiting brainwaves.  For Roman, it’s literally visions of the city of Kharkov…again, for you, for me, or for anyone, it could be something entirely different.  And you know what’s awesome about Roman behind the scenes?  He LOVES that aspect about his music and fully embraces it.  There’s no wrong way to listen to these tunes – songs like these are meant to be interpreted by the listener and we’re meant to form our own attachments; his mission as far as that is concerned, is fully accomplished.

I loved the slight melody that crawls into the light throughout the fifth song on this album.  There’s a haunting, mystical, and enchanting beauty that finds its way through the dark on this “Untitled” track – and the contrasting elements are exquisite!  Almost like they’re constantly at odds with each other fundamentally, but sonically complementing each other the whole way down; or another way to say that would be like, the dark is constantly battling against the light, yet the battle between them is stunning to experience.  And I loved this cut, because NEITHER side ever seemed to gain control – the balance explored here is straight-up remarkable.  Every time you feel like the dark is about to fully consume the light, the light breaks through yet again, and vice versa.  The highly interesting push/pull dynamics of this song work fantastically while sounds bubble, chirp, whistle, and swirl around you.  Truly compelling to listen to…you could hear the ol’ pin drop in this studio when I would listen to this song…I’d hardly move a muscle at all, just sit and listen as intently & attentively as conceivably possible.  This fifth “Untitled” song is seriously noteworthy…it might be as subtle as a song can potentially be, but at the same time, that display of balance and the struggle to maintain it…I have no words, it’s just incredibly awesome to experience something as well thought-out as this is – well done Roman, well done.

From there, things begin to get shorter as Kharkovsky reigns himself in a bit to under four minutes on the sixth tune!  Heavy on the atmosphere, the drone-effect of this song works really well in that true-ambient style…perhaps a bit more of a background sound for many when it comes to this particular track, but again, for the audiophiles out there like myself, you’ll love it all the same.  Working with a delicate rumble, unlike the rocks from earlier…more like the dull roar of a distant engine running or machinery at a low-hum – you just never know what to expect from this guy!  I dig this though…there’s a somewhat relaxing & hypnotic element at work on this “Untitled” track that really felt good to listen to.

In the seventh track, Roman continues to explore the aural depths of sound bouncing around in the hollow space around him…creating haunting vibes that creep & crawl fantastically like a shiver up your spine on this “Untitled” tune.  Very space-like once again, it’s like those claustrophobic scenes in movies you’ve seen set way outside of Earth’s orbit in the darkest most isolated places above our planet.  I love the tunnel-like closeness that you can feel crawl under your skin when you listen to this song, yet how wide-spread and open everything we hear actually is in the recording.  Displaying a real mastery of production & sound – Roman puts all the right touches on tracks like this seventh cut; he’s got such stunning attention to detail that it makes all the difference in the world in bringing these soundscapes to life.  The results end up speaking for themselves, despite being instrumentals – you FEEL this music in your bones or in your soul…or if you’re lucky like on the fifth “Untitled” track, you get both!

On the final cut from Rituals, Roman heads towards the light in another incredibly well balanced tune.  While the fabric of the sound seems like it could tear open at any given moment, fragments of light peer through the enveloping atmosphere, sparkling like audio gems popping through the mix.  For me, this is another solid example of the music I dig most from Roman…songs like the fifth “Untitled” track on this album, or the howling winds that roared through “Sleeping With The Winds That Lie Above The Clouds Of Kharkov from the Tales Of Kharkov Through The Eyes Of My Nightingale album I had reviewed before.  While I do enjoy most if not all of what Roman creates & comes up with in his experimental/ambient music – it’s undoubtedly the most subtle of his tracks that seem to hit home hardest with me personally.  This last “Untitled” tune on Rituals definitely has that immaculate gift he has for transitioning sound in the slightest of ways on full display once more before the album is over – and by this point, with these skills put forth on so many of his songs, by now, all doubters should be silent; these songs are no accident, these subtle movements and shifts in sound are all intentionally designed.  It’s been a wild ride through the imaginative tunes that Roman Kharkovsky creates – and according to that latest interview we’ve done with him, he’s far from finished.  In fact…if you read between the lines of what he’s said there – and I highly recommend that you do – you’ll learn that he’s pushing past the obstacles that have held him back from making music over the last several years and that he’s ready to move forward again.  I highly suspect that we’re about to enter some of the most creatively inspired moments of Roman’s career in the future to come…you’ll never know what to expect from Roman, but you can always assume it’ll be music that’ll captivate your own imagination, be wildly interpretive, and guaranteed to be fully different from the rest of what’s out there right now – and that’s always worth making time for.