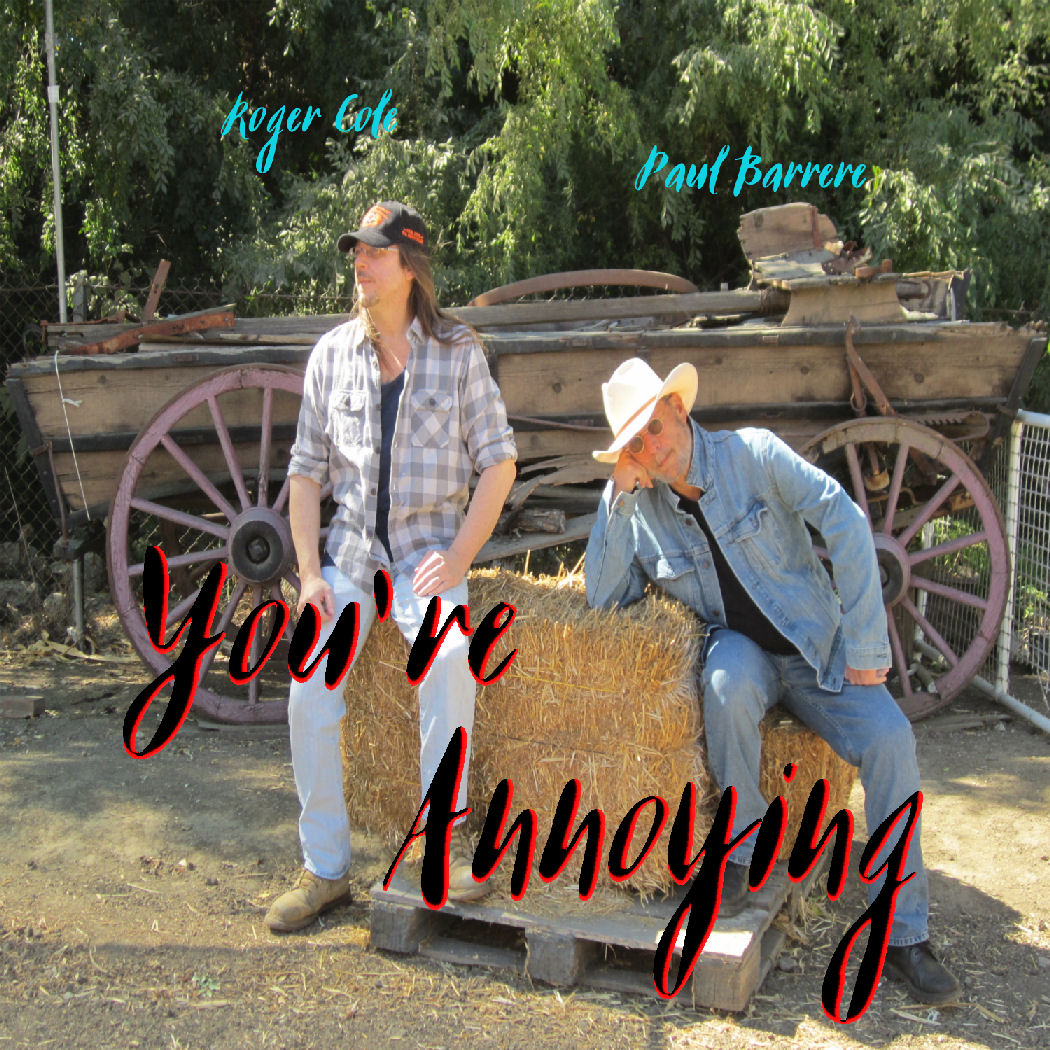 If you tuned into the SBS Podcast last night, you already had a chance to hear this latest tune from Roger Cole & Paul Barrere, two of our more frequent guests here on our pages and an incredibly active duo overall.  These boys are always up to somethin’ it would seem…we’ve reviewed several singles from these two over our history here at sleepingbagstudios and had them on many a show we’ve done…good hard workin’ folk these guys I tells ya…

Today though…I suppose I mean ‘folk’ in a couple ways when it comes to their new tune “You’re Annoying” – which is definitely leaning towards a folk/country edge in its overall sound.  It has that classic like…you know…get out the ol’ jug and washboard & jam-along kind of feel to its style, approach and atmosphere…and for the most part, I’d say this is a pretty different tune for these guys when it comes right down to it.  I’ve heard them in similar playful modes before in the sense of the attitude in the track but definitely felt like this single had the duo trying something old & something new at the same time.

Like I had mentioned on the podcast…sometimes putting out a single is really a method of letting us all know you’re capable of other ideas, sounds and directions with your music.  While I don’t think that this is necessarily an indication of where they’re heading…I think it’s a good indication of where they’re at right now; they’re obviously in a good place, chilled-out and having some fun with it all.  “You’re Annoying” draws on humor and clever writing in the lyrics to help make its mark and leave that memorable impact…and again…I think there’s a value in the enthusiasm & fun you can hear them having and the tune itself is of course as reliably played by the guys as ever before.

And besides – everyone’s entitled to a bit of fun in their lives aren’t they?

I certainly don’t begrudge them that…they’re allowed to have all the fun they want.  They remain focused and still deliver a solid tune in any genre they take on right now…you’ve been able to hear the confidence in this project continue to rise alongside its steady supporting fan-base and right now I feel like they’re in that magical place in music where they can take the entire world on in any style they choose.  That being said…I personally connect more to the serious-side of these guys when it comes right down to it…and further honesty you’d find on these pages would definitely point you to this particular tune of theirs being well-outside my typical genres of choice.  “You’re Annoying” was a tougher one for me in the sense that it’s a well-played & well-written tune that relies on time-honored, tested & true ideas throughout music’s history and I wasn’t quite sure how much it added to the current roll they’ve been on.

I dig the guitars on this one a lot…love the lead’s tones sliding around in behind the bass & beat of “You’re Annoying” and I liked the lead-vocals.  Spot-on for tone, rhythm and flow – they’re just as focused here in a light-hearted attitude as any other song they’ve made as of late when it comes to the performance itself.  The filtered backup vocals…hmm…you know if I’m being honest, I’ve heard this song more than a dozen times by this point and I STILL can’t draw to a conclusion as to whether or not I thought they helped or hindered this tune.  I like the idea…it might be the sound of the filter or the layers combined, I’m not quite sure…it’s an awkward fit in my opinion, yet it still DOES fit.

I’ll say this…these guys are highly-skilled, proficient musicians that are capable of pretty much unlimited creativity.  If you’re familiar with their music, you’ll know that they’ve always drawn upon past influence and attempted many styles & sounds within the widespread borders of rock – but more often than not you’ll still hear that twist on it all that brings something new to their catalog of tunes.  While “You’re Annoying” potentially introduces a new sound into their set-list…I’m not sure I was convinced that they did anything new with the song itself.  Sometimes it’s not about that…I get that…sometimes it’s just about making a sweet tune to listen to and in that sense, they’ve accomplished the mission.

For me, overall the writing of the lyrics on “You’re Annoying” took the spotlight here along with the lead-guitar.  I like that there’s always a new stand-out part in the writing or music of Roger & Paul that’s different from the time we heard them before and the time we heard them before that…they do always make a sincere effort to highlight some key elements in the production that shine a bright spotlight on the essential instrumentation or uniqueness in their songs.  Here on “You’re Annoying,” even though half of them carry that filter in the trading-off of the call & answer style vocals…you still get that added attention to the lyricism and focus on their performance, tone & sound…and as a result, it’s the clarity in the writing you can really hear.  I know what they’re capable of and definitely recognize this is a much more chilled-out tune that’s probably a walk in the park for these guys to play…but I also recognize the need, want and desire to take a moment or two to dive into the familiar & inviting to have a little bit of fun too.  “You’re Annoying” undoubtedly has a relaxed and comforting atmosphere in the music which contrasts brilliantly with the sharp wit in the lyricism…it’s like the music-equivalent of sitting around the house with a group of friends on a Friday night and a jam breaks out – and I think people will dig that friendly vibe this song has no matter what the lyrics imply!

Find out more about Roger Cole & Paul Barrere at their official page at:  http://betterdazemusic.com