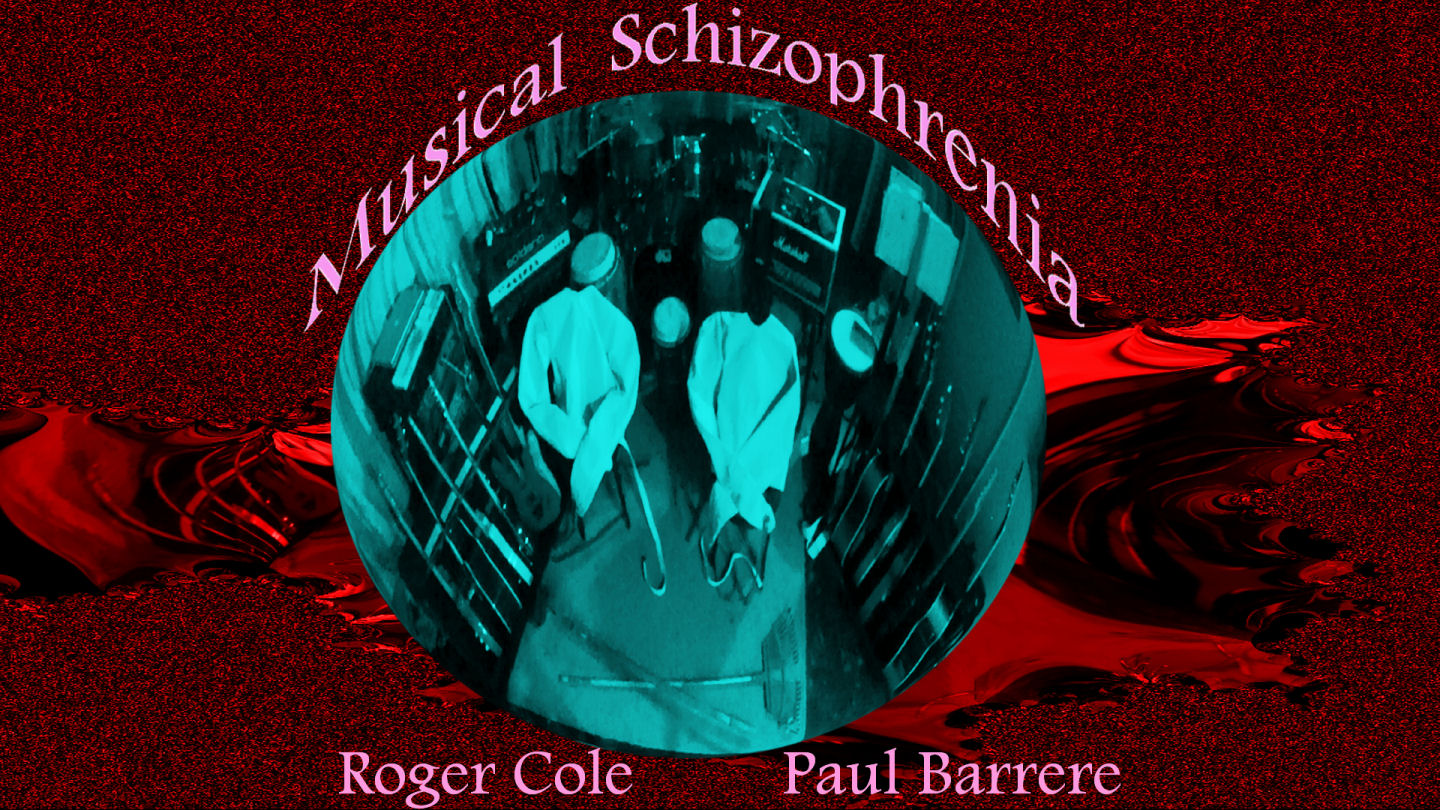 Many of you out there watching our music-show SBS Live This Week will be familiar with the names Roger Cole & Paul Barrere – we’ve spun videos from this duo many times on the show. We’ve seen them from their beginnings up to and including the lead-single from their latest album Musical Schizophrenia, and overall it’s been a pleasure to watch & listen to these two find their way and truly develop that rhythm between them over time. And perhaps before listening to their latest album I might have argued that these two had already found a groove that worked for them on their previous records…but after listening to Musical Schizophrenia, there’s no doubt whatsoever – Roger Cole & Paul Barrere are clicking together 100% of the time in their music now and the evidence is a truly tight, entertaining set of new tunes.

If that smooth opening of “The Quiet Man” doesn’t make you want to sit around the bar for one last call, then you’re nuts; the incredibly invitational sound of this beginning to Musical Schizophrenia already ups the ante from their past catalogue. The guitar sounds from Paul Barrere’s skillful hand are laced with syrupy-sweet tones that are so thick and rich that they make an immediate impact. Winning a most-improved award right alongside him is his cohort Roger Cole; I know for a fact that some people have questioned this combination of talent in the past – and I think that now they’ve found that real groove they’ve been searching for that Roger Cole & Paul Barrere are certain to have the last laugh from now until always. “The Quiet Man” with all its subtle-cool, in-depth lyricism and perfected layers of emotion is the kind of opening song to an album that turns doubters silent; Musical Schizophrenia is the type of album that makes people re-evaluate any pre-conceived notions and fully opens the door to an entirely new chapter & path for these two to connect to us all.

And with the funked-out groove set deep in the rhythms of “Moto’s Monkey” or the mellow rock-tune to follow “Breakdown” you almost want to shout at these two for not delivering these goods to us when they first started out! Almost. But that would also be suggesting something similar to putting a roast in the oven and expecting it to be cooked in-full only seconds later; great recipes take time…and once you’ve got just the right balance and mix, they live on forever. “Moto’s Monkey” has much in common with the classic sounds of bands like King’s X and King Crimson in their funk-induced moments and they nail smart vocals with great hooks that lead straight into tremendous guitar solos.

They retain a throwback vibe that sounds every bit as authentic as these veterans of the music-scene should carry throughout “Breakdown” and their lead-single “Breathe.” One fiddle-player-short of a Jethro Tull-style rhythm, melody and structure – “Breakdown” changes at just the right pace throughout in a slow, memorable build with multiple payoffs. From mellow to straight-up rock, the assembly and production on “Breakdown” is a real salute to a classic time of great writing and clever choices in rock’s past. It’s great to hear sounds like these made so well in today’s modern world…there is simply not enough music out there like this right now. I hate to say it…but if Pink Floyd has truly thrown in the towel…the lead-single from Roger & Paul, “Breathe,” will certainly make you consider them capable of taking over where they’ve left off. Impossible to deny the power and impact this song has…the incredibly effective use of space and silence in the atmosphere against the guitars and echo-filled vocals gives this cut a unique flavour unlike any other on Musical Schizophrenia…one you’ll want a lot more of.

Bringing the atmosphere in closer for “Who’s Right,” RC & PB take us out of the space-like place they took us to in “Breathe” for a more stripped-down acoustic track and gentle melody. Big fan of the way that Roger sings this song…again – it’s songs like this that rely somewhat on their old recipes from the past but also starkly show the progression of just how finely tuned they’ve become. “Who’s Right,” at least to me…sounds like two people that have truly found a way to write together as one. With heroic guitars, great harmonies and light piano-keys accompanying the background beat, this becomes a truly memorable moment on the album…one that feels personal…this song means something special to this band in comparison to the rest somehow…you can feel it through the delivery.

“Bad Blood” brings out more of a blues-rock side of this duo until it nears the two-and-a-half minute mark and transforms into something bold and beautiful. I was digging this tune before the switch…but that break into the instrumental part of “Bad Blood” is pure genius. I love the way the personality just pours out from the drums…they instantly add an inspiring vibe at the moment the music makes a departure for a full minute into a stunning combination of piano, percussion and soaring guitar notes.

Excellent guitar rhythms and some of the best vocal melodies on the album make themselves known in “Just Keep Walking.” I’ve always appreciated songs like this, and definitely dig the way they’ve recorded this one…it feels like a gathering at the campfire for a song that brings everyone together. With inspiring lyrics that echo the path of their very journey…there’s wisdom not to be ignored in a song like this; listen to those words. Including what is by far and away one of my favourite guitar solos on the album, Paul always seems to continually find a way to elevate the sound of this duo with immaculate charisma that truly rings freely from his guitar strings.

“Mary” is another song that you’ve seen throughout the episodes of our show…it’s been great to hear the way songs like this and “Bad Blood” have taken on new lives within the context of the album in full and just how they fit into the line-up with the songs I had yet to hear. I’ve always been a big fan of this song…I don’t know if it’s been given more of an overhaul in between when I’ve heard it last and now, but it seems like it somehow… It could be that, it could also simply be the effect of hearing a song I already loved coming back to me after a long absence…it truly does make the heart grow fonder. Awwwwwwwwww!

The way these two brighten up towards the end of this album is a real masterstroke in memorable endings. Much of the album is somewhat in that mix of hopeful & melancholy…whereas it opens with a vibrant energy – it slowly slinks away to a more atmospheric feel throughout the middle. Like pulling out the extra army-troops when it’s their turn at the game of Risk – they bring out the full-scale invasion of your stereo-systems through the bright melodic attack in the final two songs. “Sail Away” sparkles with sweet melody that quickly finds a funk & groove that can’t help but bring an instant smile to your mug…what a beautiful, free-feeling, natural acoustic-rock style! It’s another dimension, another aspect of, another avenue for Roger & Paul to take their music in, and has a vibe that leads you along floating, dreamlike…hazily…happier…

I gotta make a massive shout-out to the awesome throwback theatrics in a closing song like “Your Virtual Life.” Taking a turn into the territory once owned confidently by the brilliant Maclean & Maclean – this song will remind you of their rhythmic tunes laced with raunchy humour. Or it might remind you of “They’re Red Hot” somewhat by Robert Johnson, which was also infamously covered in style by the Red Hot Chili Peppers to close out their magnum-opus Blood Sugar Sex Magik. “Your Virtual Life” brings Musical Schizophrenia to an end after completing an audible tour of music’s wide-open landscape that’s been explored from end to end. Massively impressed with the way this talented duo has continually shown improvement in their music and that the hard-work and efforts put in can yield an evolution in sound like you’ll hear on an audible-adventure like Musical Schizophrenia.

Find out more about Roger Cole and Paul Barrere at: http://betterdazemusic.com/