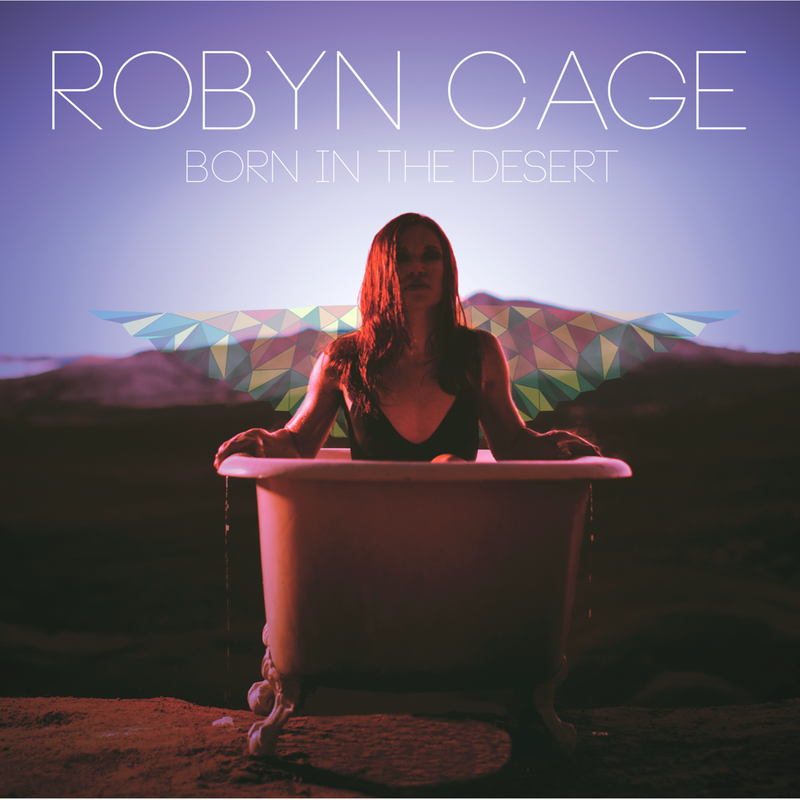 Brand-new songs from the debut-album of Robyn Cage, songstress with a flair for the theatrical & dramatic – Born In The Desert plays with an exotic, vibrant dynamic you wouldn’t expect to come from a first record or first time out. Truth be told, she’s spent her lifetime immersed deep in music and has studied at several levels and worked with numerous professionals in the industry to bring this album to life…so…yeah, she’s new – but Robyn Cage is anything but inexperienced when it comes to making music – she already sounds completely pro on Born In The Desert!

The journey begins with “The Arsonist & The Thief,” which immediately stands-out for both the music and lyrics. Beautifully played bass and guitars fuel the sparkling atmosphere amidst a gentle beat in an intoxicating combination as Robyn begins to weave her words fantastically through the rhythm. As beautiful of a beginning as you could imagine the start of an album to ever be – it’s a gorgeous rhythm and vocal-flow that meet each other perfectly to form the magic in this first song. Robyn sings confidently and flawlessly, continually building the strength in her tone as the song heads to the end. “The Arsonist & The Thief” is a fantastic choice to open the album and experience – perfect beginning and assuredly a high-standard set immediately with this brilliant start.

If you look in the list of names that have had a hand in her music on Born In The Desert you’ll notice amongst them is Darryl Neudorf…who has worked with talent like Sarah McLachlan in the past – something I think you can noticeably hear on the second tune “Larger Than Life” at times. I have no official notes or anything that tell me he worked on tracks other than “Burning Now” but you can certainly hear the influence of artists like Sarah McLachlan on “Larger Than Life.” It’s an empowering anthem, Robyn sounds confident and clear…but the song itself feels a little less personal and more of an attempt at a hit-song as opposed to most of the material on this record that highlights her uniqueness & authenticity. You can hear she still believes in all the words she sings…just not as connected to them emotionally perhaps in comparison to tracks like “If You Don’t Try.” Great rhythm & vocal-flow bring this third tune to life and Robyn lets the vocals soar into the atmosphere of this dreamy song – “If You Don’t Try” really puts the distinct & endearing qualities of her vocals right on full-display.

With its piano-led beginning, the title-track “Born In The Desert” does not disappoint. A crown-worthy, slow-burning melody…the subtle-nature of this track has an intensely textured melody to it. As it thickens towards the middle, she reminds me completely of Poe through the vocals and music – and I’m audibly always on the hunt for another sound similar to that, so believe me, “Born In The Desert” works for me all the way through. Picture like…Lana Del Ray with enough iron in her blood to actually give some energy to her airy vocals and you’d have something closer to Robyn Cage’s confident delivery and similarly-picturesque lyrical ability.

As I’ve mentioned already, “Burning Now” certainly has an ace up the sleeve with the assistance of seasoned-pro Darryl Neudorf at the studio-controls…and whatever money, bribe or deal was made to get him there was every bit, 100% worth it. Absolutely the stand-out track on the record so far – “Burning Now” is freakin awesome in every possible way from performance to production, words to music…and I completely love the way Robyn sings this one in the songs beautiful verse and chorus. It’s certainly a single-worthy song…perfectly written and produced.

I mentioned a flair for the dramatic & theatrical in the opening of this review…and that aspect makes itself known as a dominant force driving the vibrant tunes “Annabelle’s Dance” and “The Cave.” Both of these tunes add real dimension and depth the album’s overall sound and really shows us yet another side of Robyn through unique atmospheres in comparison to much of the rest of the album. I mean…all the songs are unique yes, but these two in specific incorporate some really cool samples & sounds into their melodies…”Annabelle’s Dance” is the perfect mix of light-and-dark, and “The Cave” works along a wonderful supressed set of drum-sounds that spread-out around a song that almost sounds as if it contains an eastern-influence to its rhythm & groove.

“Cinderella Story” absolutely got me for its sweetness and its direct, honest approach in the lyricism. Beautiful melody here…think something like The Cardigans-meets-Keane…or maybe just The Cardigans on their own. Of course, that semi-theatrical aspect still follows Robyn’s music here on “Cinderella Story” as well…so maybe the sound & style is all a little closer to something like Hooverphonic with all of the fantastically dreamy elements and captivating atmospheres on this record. Whatever the comparison you might come up with might be – I’m sure we could all agree that a melody like “Cinderella Story” is a winning one.

She carries the song completely with her beautiful voice in “Letting Go.” There’s music as well…but so sparse, so minimal really, that it’s completely up to Robyn to create the existing melody in this song…and she NAILS it here. In a golden-moment…one of those performances you wish you could frame and display…Robyn is angelic on “Letting Go” – that’s a magnificent performance right there, that’s what that is.

With a delicate & tricky vocal-rhythm similar to something you’d find from Regina Spektor or Chantal Kreviazuk, “Capacity” is tiny, innocent, sweet and yet again, spectacularly beautiful. Really loved the music of this song; it’s still subtle but noticeably compliments the ideas put forth in the vocal-melody…it might sound simple to the ears somewhat – but I assure you the perfect in a song like this is intensely complex…and Robyn has done an extraordinary job here on “Capacity.”

“Theatre Noir” is undoubtedly a song that reflects a lot of what Robyn loves most about making music and the combination of clever lyricism and exotic and unexplored textures in song. That flair for the theatrical side of music is going to resonate with some a lot more strongly than others…it is not the kind of music you’re going to find on the radio anytime soon, but I wouldn’t be surprised to find Robyn’s music popping up in movies over and over in the future to come. There’s a place for songs like “Theatre Noir” in the new season of American Horror Story I’m sure isn’t there? And I mean this in the best of possible ways…I love that show…this inventive, bizarre, creative and camp performance would fit right in there.

Post-originals, the album continues on with a solid remix of “Larger Than Life (The Planetaries Version),” which adds a little more strength and beat to the music…and again, even though this song to me is more on the Americal-Idol-ish side of music – to me this mix sounded closer to the attempt & ideal of the concept realized than its original mix. There are also two additional mixes of “Burning Now” which completely warrant a listen; the first one, the “Kristin Royal Remix” is immediately captivating…somehow she’s taken the sound closer to Alanis Morrisette with a massively revitalised structure to the music. Honestly – it’s freakin’ brilliant. It’s SO DIFFERENT than its original version that “Burning Now (Kristin Royal Remix)” is absolutely like listening to an entirely different song – the experience is massively captivating and one of the highlights on the record for my own listening-experience personally. Found once again in its acoustic-form right after…it is AMAZING just how much Robyn has been able to pull out of this one idea; I love the stripped-down piano-led performance of “Burning Now (Acoustic)” – because MAN do you ever get a full-dose of this lady’s wonderful voice.

Usually I rebel against repeating songs on an album unless the versions have a truly audible reason for existence…and every single one of these songs deserves the right to live and thrive on your stereo-systems. I even enjoyed “Theatre Noir (Live)” a little more-so than before…it truly sounds like it was written with intent to be performed & played-out live, so to hear it in this setting I thought made the atmosphere of the song a little more appropriate. Very cool to hear Robyn pull this off with the same confident approach live as she has on record – if this live ending is any indication, I’d say that whether in the studio or on the stage, you can expect absolute excellence from Robyn Cage.

Find out more from her official page at: http://www.robyncage.com/