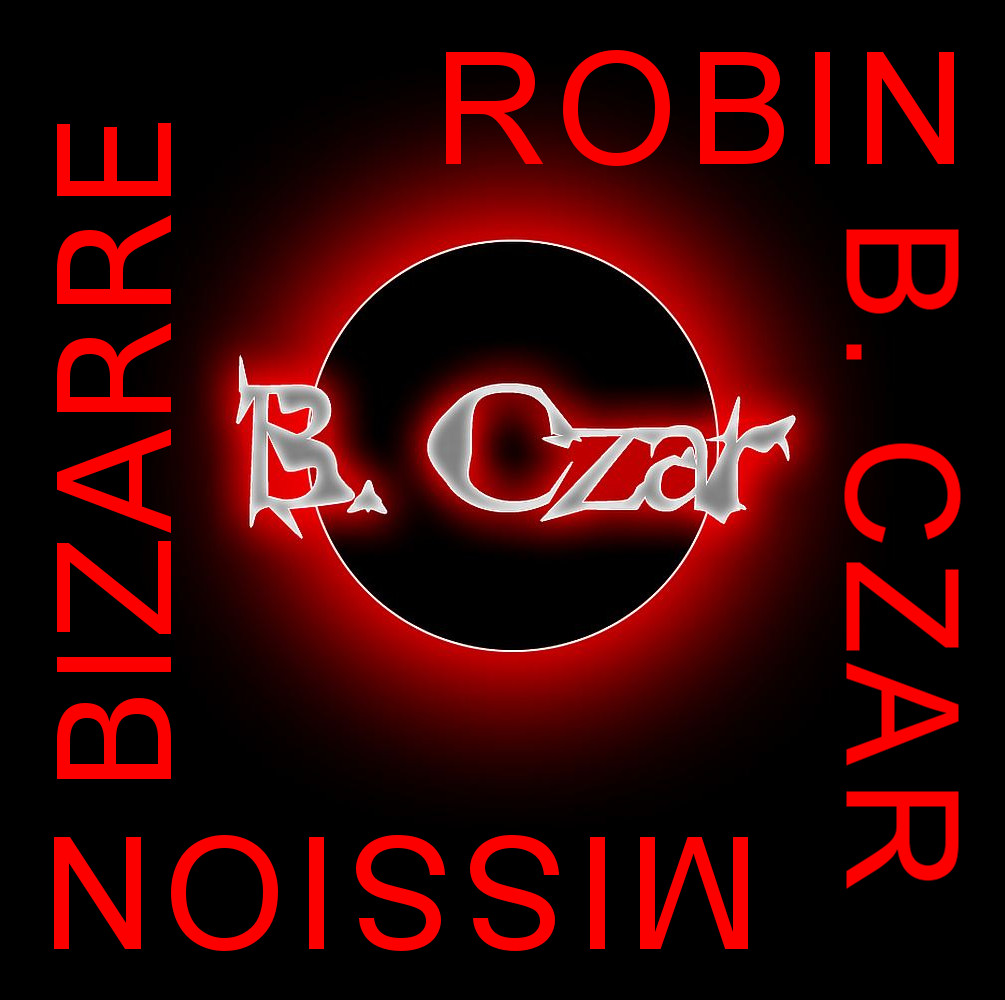 When I tell ya that what you’ll hear from Robin B. Czar (Hey! I see what you did there!) isn’t like anything else you’ve got in the house…you’ll probably wanna trust me on that. And if your curiosity level rivals or equals my own…chances are that comment alone is enough to send you running to push play just to find out what the heck is going on here in the Mission Bizarre. You with me?

Yeah you are – that’s why I love you guys…you’re weird like me.   Push play on this one…c’mon…

Mission Bizarre is an album roughly eighteen months in the making; I like how the tone of where I read that made it seem like a long, long time…all of you out there know that’s more than decent time to follow up the album before, and you all know that most of us never quite get the time we need for our creativity. Never giving up the ambition is the key, and Robin B. Czar never quit – he put the time in that’s necessary to create something completely unique and altogether different. Self-classified as heavy-metal…Robin my man, please know I mean this in the best of possible ways – this is way more like heavy-MENTAL dude! You know what I mean…don’t tell me you haven’t seen the eyebrows raise up to the ceiling in shock & surprise EVERY time you play someone the opening jam on Mission Bizarre, “Your Descent To Hell” – you KNOW you do! And dude…metal or not…this is the kind of unique to be proud of…this stands out from the rest and the album does it instantly from the moment it starts! The guitar-work is completely terrific, wild and bizarre…the vocals…oh MAN…I mean…what can I say Robin – I DIG what you’re doing bro! I like the confidence and completely strange production…I totally love the energy in this opening tune, and again – the guitar has some wickedly insane parts that weave throughout “Your Descent To Hell.”

I had to listen through a couple times to be sure…and this is probably due to the span of time that the songs take place over in their recording…but that “Your Descent To Hell” is like, SO damn good and produced perfectly that it nearly costs the track to follow, “Requiem.” The brightness of the music fades away…there’s something missing in the production of this second tune that the first tune had, and the result is a little more on the tin-can side of treble as the track begins. Robin knows as well as I do he’s making a project that people are either going to ‘get’ or they just plain won’t – the decision making process for most will be instantaneous and brutally for one side or the other, especially when it comes to the vocals. I’ll fully admit…I didn’t dig the effect as much in the verse, but the high-up (like REALLY high-up) vocal parts crashing into the crushing & colliding with the low, monstrous backing vocals…ahhh….SO GOOD! And I bet people think Robin is weird as hell when they realize that’s ALL him. The guitar sounds and solos stomp out the end of “Requiem” and blaze to a dramatic, wildfire ending.

Atmosphere becomes king in the third track of the Mission Bizarre; “Free” starts out in a mythical-mist and slightly meaner edge to its beginning. Robin has backed off the full effects-panel he was using during the opening tunes…it’s still in his signature sound but it’s dialled-down just enough to potentially win over a few more ears that weren’t quite ready for the madness & mayhem of the first two songs. “Free” has a bit more added pop-style melody the metal I suppose…I dunno…you gotta tackle this guy in sections like butchering the beef – there’s a lot going on and the music’s overall relationship to progressive-rock is always prevalent.

There’s an art to what Robin’s doing, and like all art, subjective to the court of pretty much every opinion you could think up I’m sure. “She Loved Too Much” remind me of something like a cross between Thomas Dolby, Prick, Dream Theater, Oysterhead and Genesis…somewhere in there. It has one of my favourite choruses on the album, it’s all synth’d out to the nines, but it works for me and I dig the melody for sure…big hooks in this fourth tune.

“Dr. Dog” has a little bit of a limerick-style to the verse that I wasn’t quite sure I was digging as much. The instrumental sections of this song might be some of the best on the entire album, but vocally “Dr. Dog” missed it a little for me. The chorus on this one is not quite where Robin would want it to be…it doesn’t raise up an inch out of the verse and completely blends in, leaving it a little flat where it should be bold & dynamic, like it is after the chorus ends and the rad guitar parts come out brighter in the mix. The chorus, if anything almost sounds like it heads down in volume; if this is an experiment or an attempt at a mix from a different angle…”Dr. Dog” I believe it’s gone slightly awry…

It is almost a little strange when you consider how controlled the melody of something like “Mad Scientist” is through the vocal-flow. Somewhat in that same trite-rhyme scheme as “Dr. Dog” – different but still almost radically sticking to convention in comparison to how imaginative the music around “Mad Scientist” truly IS. Excellent samples, astonishing guitar sounds…brilliant backing vocals and a decent chorus…these are the spots that really reveal just how creative Robin can be.

“Grief” scales it all back a little and the madness subsides for a somewhat more ‘traditional’ sound. A little muddier of a mix costs this one a little in comparison to some of the others…the dulling of the mix in a couple key spots on this album slightly affect that cohesion and flow and kind of snap you out of the atmosphere that Mission Bizarre contains. It’s tougher on songs like “Grief” when you know there’s a song in there somewhere buried deep…the melody on this one is good, the flow works…I think the vocals need the most work on this one in comparison to the rest as there’s a couple of flat notes and nasal tones that aren’t the most inviting. Always to the rescue with astounding guitars…I mean…what else can be said about this guy when it comes to the axe? Robin really writes some impressive parts.

OKAY…the CAT MEOWS at the beginning of “Kiss Of Death” is pure fucking audio GOLD. This is a really, really strange track…there’s almost a complete absence of low-end outside of the verse, and even then it’s only slightly there. In my opinion, those guitar riffs are bright enough that they’d stand out just as much with a little bass added into this one to help thicken the sound as it does sound a little thin. Detailing the accounts of one mean-ass kitty through the lyrics, the samples that are used in this song are just completely awesome. Guitar, 100% on as always; lyrically, a track like this has to make you smile just a little…it’s so damn SERIOUS and it’s about a CAT. I love it.

Mission Bizarre makes a few clever choices in mixing it up towards the end. The piano-led “Only That One Wish” is quite a departure from much of the sounds we’ve heard so far, and it’s another unique aspect of the music that works well for Robin. The punk’d out chorus…maybe not as much…once again it seems to head slightly down in the mix at that point, and that’s where the energy is…where things need to be BIG brother-man! The clarity in the verse comes easily through the use of space in contrast; “Only That One Wish” has some good ideas in incubation here…just a little smoothing of the edges into a polished refinement.

The album ends on a strong note…still as bizarre as when it began on its final-cut “Until We Meet Again.” This song…I mean…it has SO MUCH going for it really…not even remotely kidding when I say I can hear a real master’s touch applied to the guitar throughout Mission Bizarre – Robin is clearly at his most confident when grinding away solos on that axe of his and it’s been a real pleasure to listen to the incredible tones he’s achieved in the innovative parts he’s come up with.

So how about that – even I’m stumped! There is…something…I’m not sure if I even know WHAT…but there’s something unique and terrific about the music Robin B. Czar is making…seems like a very liberating sound…real music-for-music’s sake kind of stuff. Written by someone with obvious talent, formidable skills and an ear for the off-kilter – Mission Bizarre is solid proof that it hasn’t all been done yet – like it or not, this is new to your ears and you gotta respect that. This music of Robin B. Czar could theoretically head ANYWHERE in the future…I’m definitely interested to see & hear where this might go; it’s never going to sound normal coming from Robin – this much I’m sure of!

Find out more from Robin B. Czar’s page at Facebook here: https://www.facebook.com/rbczar