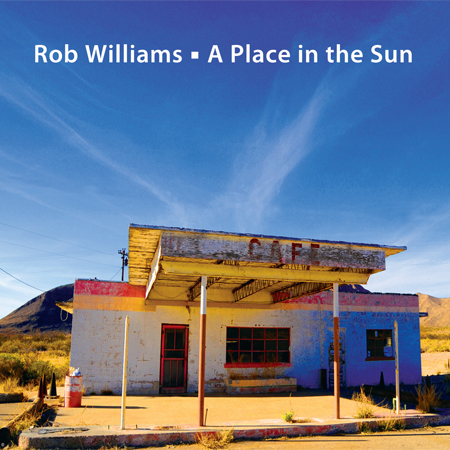 Rob Williams – A Place In The Sun – Album Review

Here’s a nifty little piece of info on our new friend Rob Williams about this new album A Place In The Sun: that spur-of-the-moment, sound of inspiration that just hit the room that makes these songs come alive was no accident. According to his main website – nearly all of these songs from Rob that involve a guest-star were only revealed to the players on the actual day of the recording sessions!

So heads UP session players – keep those skills up…you never know when a Rob Williams of your own is going to give you a call!

But in all honesty, when you’re listening to A Place In The Sun…keep that in mind and you’ll hear what a tremendous feat this might have actually been to pull off being recorded in this method. What you’ll find for sure, is that those players were GREAT players – you won’t hear songs that sound “recently-learned,” because these are clearly songs that have been written with care and one can only suppose then handed over to these various guest-stars to execute his overall plans flawlessly. You won’t hear mistakes – quite the opposite; you’ll hear Rob Williams’ vision come to life.

Throughout playing A Place In The Sun, one thing becomes extremely clear; a vision might come to life, but that life still needs a firm and steady heartbeat…and at the core of each and every one of these songs, Rob Williams reminds you time after time that the heart and the emotion in these songs come from him through a genuine ability to write songs you’ll connect with.

Here…I was hoping to avoid this…it can be difficult letting you into my brain though…just bear in mind there’s an explanation to follow this, but let’s see if you can follow me first….

Big fans of all three here personally, and certainly three artists/bands I can point to in reference to Rob Williams in this court of musical precedent. First of all – Rob had reminded me somewhat of Matthew Sweet through his vocal tones and his style of songwriting. Like Sweet, Rob Williams supplies much of the emotion through the actual performance rather than simply relying on heartfelt lyrics. Sweet was more or less unafraid to pursue any place his voice would lead him and again, listening to tracks from Rob like “Just Like You” or “Norfolk Southern” proved to me he was similar to Sweet in these exact same ways. Rob Williams roams over different styles of acoustically driven pop-rock, always delivering a passionate and inspired delivery to the music.

And it’s through that music you’ll find my reference to Cracker. Especially the front-loaded part of this album in opening tracks like “Whiskey In The Morning” or “Nothing Good.” Unknown to many, David Lowery and his band of Americana-bandits made a real laid-back and easy, acoustically driven ballads and rock-songs when they weren’t fully plugged in. And like Sweet – Lowery could write an excellent story into his songs. And like Sweet and Lowery – Rob Williams can deliver music written like a warm slice of home…“A Place In The Sun,” the title track is a fantastic example of this.

Hmm… and writing music like a “warm slice of home…”

I mean…who didn’t feel like that listening to Paul Simon? So like Simon and Sweet and Lowery….Williams clearly has that knack for being able to write in a style that could very well earn him a song that could steal your heart away forever.

“What You Gave” is definitely a track I’d feel comfortable in saying really represents Mr. Williams extremely well. Honest and sincere in the delivery – Rob shines through once again on this beautiful ballad – highlighting some of the depth in emotion you can find on A Place In The Sun. In contrast – the very next track on the album, “Cry Another River” shows you the up-tempo side of Rob at his best. A rhythmic and playful track, again, I had to marvel at just how well this album has come out with many of these players only having learned the songs just in the hours before.

ROB – you’re a genius buddy! Whatever stick you poked all these people with was definitely the right one!

“Just Like You,” I found to remind me of another one of my all-time favorites, Pete Yorn, mixed with that up-tempo parts of the Counting Crows. I’m all-smiles by the end of this album from Rob Williams – every artist or band he’s even vaguely reminded me of has a core of some extremely amazing songwriting; he’s keeping great company! “Just Like You,” is to hear Rob at home completely; a song in “the pocket” for him, using the crisp and clean sounds of his voice beautifully in this track.

Sometimes you can hear a sound and it just makes SENSE. I think at the heart of it all, that’s what I’ve learned here from listening to this music from RW. You have to assume that he’s not only a great communicator through the stories in his songs, but also with these musicians that came in to make this album a reality. Because these songs clearly made sense to them, or they wouldn’t have come out as stunning as they have.

Driven by that very heartbeat you’ll find residing still to this day in the very chest of Rob Williams, A Place In The Sun will make perfect sense to you too.