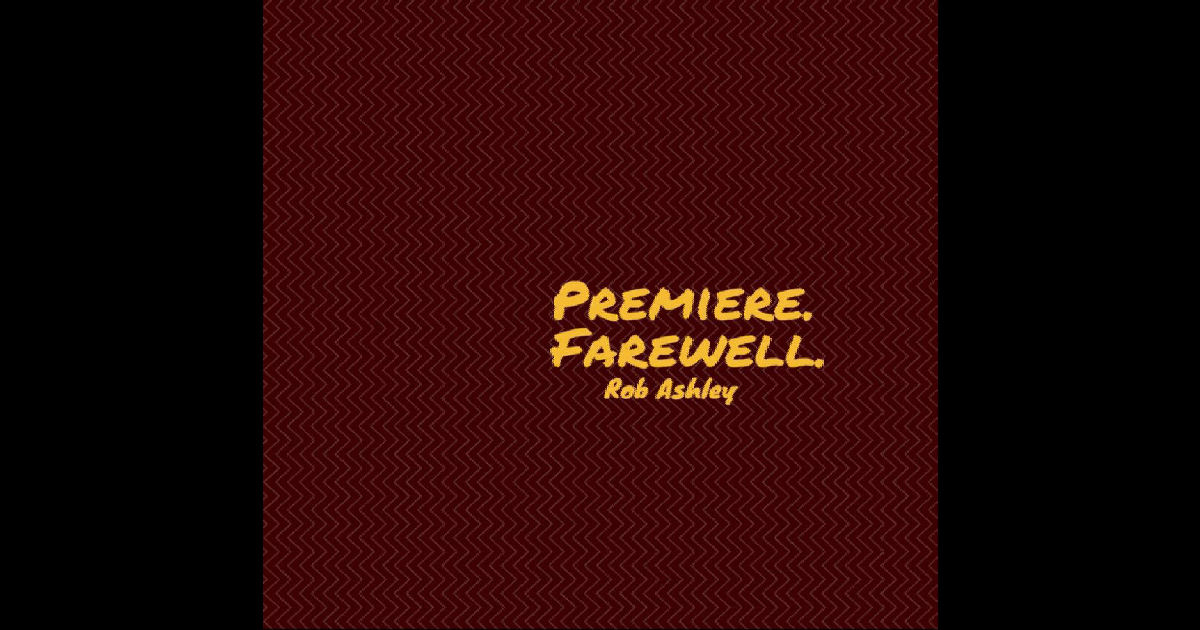 Delicate & tender sounds float through the gentle melody of “The Drugs Didn’t Last Forever,” the brand-new single from Rob Ashley and his new record Premiere. Farewell..  Kind of an odd magic in this indie-folk tune really…the more I checked this out & listened to it, the more I got into it.

There’s a humble honesty you can hear in Rob’s sound that I think people will connect with.  “The Drugs Didn’t Last Forever” isn’t flashy by any means…it’s a fairly stripped-down melody with minimal ingredients, moves along at a slow & hazy pace, which all becomes an effective method of expressing the sentiment in the title & lyricism.  It’s almost like you could imagine this song being the soundtrack that plays in R.P. McMurphy’s clouded mind while trying to convince his cohorts to break free from Nurse Ratched’s icy grip on their sanity.  With the added ambient voices in the surrounding atmosphere alongside the music and layered guitars, there’s a subtly psychedelic-pop vibe that runs through the sunny surface level of the melody.  Lyrically, Rob takes “The Drugs Didn’t Last Forever” to much more contrasting territory, detailing devastating emotions through a clever narrative & storyline as he personally reflects on his own struggles, thoughts & feelings as well.  He sings this song with real character…and ultimately, I suppose that’s likely what connected with me most.

Sometimes you hear that singer that just makes sense to your soul, you feel me?  Rob’s not all shined-up & polished like so many others…and there’s something about the way that he sings this song that seems to tell me he couldn’t care less about that – and I love that.  To me, “The Drugs Didn’t Last Forever” came out much more like a performance piece as a result…an artistically-inclined vision that was actually quite remarkably focused.  I also think songs like this are what make the difference between listening to something once verses several times abundantly clear; you might notice the charming sound of the music and melody at first, but this track takes at least a couple spins to really get to the heart of it.  That’s when you really start to appreciate just how much Rob COULD have rounded every edge, but in recognizing what the song truly calls for in its writing, structure, sound, attitude, & tone – he makes the much smarter call of giving life to the words through different means.  You can hear that raw emotion, the contemplative self-reflective thought-process, the willingness to be open enough as an artist to be vulnerable by feeling the true vibe of his writing & style, and just letting those words come out how they do.  “The Drugs Didn’t Last Forever” has an organic & real sound as a result…like this song somehow floated right out of Rob Ashley naturally from deep inside him where it’s been waiting all along.

There’s no question that it’s an oddball choice as a single and will definitely have to fight to be heard – that’s the nature of the game right now…and anything with a gentle melody like this is pretty much always playing it.  Personally I think the contrasting downtrodden lyrics with the shimmering guitar sounds ended up working really well…there’s a sincerity in Rob’s style that to me, really works well.  Bass & drums are locked in solidly, the rhythm section plays a role but keeps it steady & straight-ahead, letting the songwriting speak for itself – and I think that there’s a huge audience that’ll appreciate this.  I’d have to hear more from Premiere. Farewell. to be sure, but with “The Drugs Didn’t Last Forever,” Rob’s bound to find a way onto playlists with bands like Sparklehorse & Grandaddy…those kind of alt-indie sounds that are played from the heart as naturally as can be recorded, no matter how bizarre the idea or strange the melody may be.  There’s crossover potential, genuine appeal, and a sparkling sound that reveals a humble artist that has a gift for matching the right energy to the music & songwriting.

So even though it might not be a typical ‘single’ exactly…it’s kind of hard to argue it’s not effective when you get right into it.  “The Drugs Didn’t Last Forever” is a solid gateway into Rob Ashley’s music – however gentle it may be, it’s also inviting & soothing to listen to through its sparkling sound & reveals real depths & attention to detail through the imagery in the lyricism combined with the overall vibe.

Find out more about the music of Rob Ashley at his official page at Facebook:  https://www.facebook.com/RobertAshleyMusic/