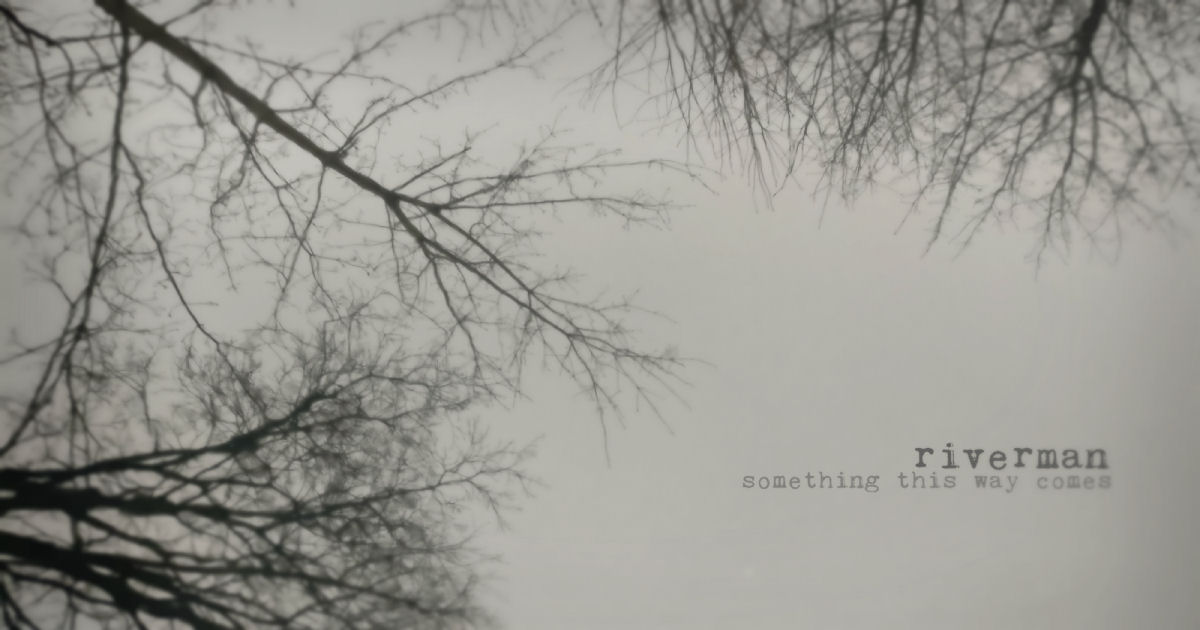 According to legend, aka the info I’ve got in front of me, Riverman started in 2017, built upon three players that were looking to depart from their strictly Metal backgrounds in search of something new.  Don’t get me wrong…Metal’s great…but this crew is onto something special here; while it might still be somewhat in its own incubation still & earlier on into this new adventure in sound, Riverman displays remarkable potential & skill throughout these two singles from the Something This Way Comes Promo.  They went searching for something that challenged them in different directions…I’d argue that they’re venturing into territory that’ll really benefit them fantastically on a creative level.  I have no doubt that the mix of progressive/post-rock ideas are meatier than the masses can tend to consume – but for those that appreciate an imaginative, fresh artistic perspective, & vividly colorful sound – you’ll dig Riverman.  As far as they’re concerned – as far as the art & craft of making music is concerned, the rewards of making music this intricate & involved are priceless…this is the kind of music that inspires MORE to come out.  And why wouldn’t it?  Considering these are the first tracks from Riverman to be released and how well things are already flowing in their favor…I’d imagine their likely in the studio right NOW because they probably never leave it!  I wouldn’t if I were them…this is seriously cool to listen to.

If I had to hazard a guess, I’d say the band has been listening to a lot of Mogwai lately, based on that post-rock vibe that flows stunningly through the music.  You can certainly hear the similarities in the style in the way that “Belifian” begins, roaring past the first full minute until it breaks into a sparse piano/vocals combo that reveals a whole different sound than you’d expect from where this began.  I’ll say this…I like what I hear from Heidi’s vocals…there are a few spots in the verses where she comes through a bit sweeter than maybe the atmosphere seems to call for, but for the most part she fits the vibe bang-on.  Like, LISTEN to her nail the chorus of this cut!  That’s energy & melody combined working at maximum-impact there is what that is.  And credit to Heidi as well…let’s be honest here, she’s practically NAKED in the verses of “Belifian” with the delicate piano, gentle bass, and subtle beat backing her up – she’s out there front & center and she does an extremely admirable job.  I think the chorus is seriously exceptional…the hooks are strong, but not at all in a typical sense…like you might not exactly remember all the words or how it goes, but you’d absolutely recognize this song every time you heard it.  What I loved about “Belifian” in particular was that the musicianship is easily just as strong as the vocals, revealing a band that’s built on three pillars of real strength that hold their own.  Excellent piano from Heidi fuels much of the melody in the verses, Jan fills the atmosphere exceptionally well with cello highlights to the chorus that raise the stakes of the emotion building throughout the song – and as far as Jesse is concerned…I mean…this dude just CRUSHES it on guitar & bass.  At the VERY least, I’m calling it, Jesse’s GOTTA be a Mogwai fan if not the entire band…there are so many similarities in guitar tones & note selection…combined with Heidi on piano and the fury of the drums & cymbals crashing, it all comes out fantastically comparable and entirely not the same at all.  Much credit again to Heidi and the songwriting of the band at work here, those two key elements, the sound of Heidi’s vocals and their own instincts on how to coordinate the melody, structure, & flow of the song, are what make the difference and adds their own identifiable stamp on this fusion of ideas & different styles of music together.

What the heck is a “Belifian” anyhow?  Looking it up on Google, it comes back with something about Systematic Theology.  That’s so incredibly far over my head it may as well reside on another planet.  Nothing like looking something up on Google just to have it return something else you’ll need to Google in order to figure it out.  I like a good puzzle and I’m always into going down the rabbit hole with any band or artist out there, but I’ll admit, I’m no systematic theologist.  Moving on.

“Old Friends” – Jesse…my friend…you’re my new hero.  The bass-lines that run through this mother are KILLER, the guitars surrounding them are equally impressive.  Dude knows exactly when to kick it up a notch and exactly when to dial it back and let the instrumentation like the piano ring out clearly or take over for a moment or two.  The switch that is made around the four-minute mark of this cut, driving hard into instrumental-awesomeness, was a brilliant move and definitely gives Riverman the opportunity to establish that aspect of the band firmly in people’s minds & ears as they listen to how this song morphs itself between post-rock/punk-punk/progressive/alt-indie influences.  Eventually that instrumental section at the end is invaded by a menacing set of vocals from either Jesse or Jan (not sure which or maybe both!) that scream wickedly into the layers of the mix, perfectly placed to make a real impact without completely dominating the rest of what we hear.  That being said, believe me, you’ll notice’em and the raw power they add when those extra vocals show up on “Old Friends,” ya can’t miss it.  As far as Heidi’s lead goes…I feel much the same as I did about the first track “Belifian” – there are moments where I’m looking for…hmm…maybe a bit more edge to match the grit in the songwriting as opposed to the angelic sounds she naturally gravitates to.  She’s a great singer, there’s no doubt about that – now it’s all about finding that real match for the atmospheres of the songs that Riverman are writing…and again, it’s not like she’s far off.  If anything – it’s almost like the opposite…almost like she’s too perfect for the gritty way that these songs develop; it’s the kind of style/sound combination that tells a guy like me to tell a lady like Heidi to not be afraid to make mistakes…that sometimes less-than-perfect tones can also come out more honest in their sound or faithful to the core ideas of the song itself.  The other way to look at it is that she’s got a vibrantly artistic approach to her vocals that is certainly capable of captivating us all at any given moment – with the freedom to experiment with a variety of styles & sounds in the limitless potential and possibilities for the future of Riverman, she’s going to go on to reveal some absolutely breathtaking moments in music you’ll remember, I have no doubt about it.

Same goes for the band…let’s not forget, Riverman is still finding their way, there’s still lots of room to grow in any direction they wanna, and there’s no question that the best is still to come, just like any band, once they’re fully dialed-in to the entire scope of their vision for their sound.  There WILL be debates, there WILL be choices to be made – but there IS a future for a band like this – they’re making music that will last, even here in their early stages.  Will they want to go more commercial?  These weighty & artistic songs certainly appeal to a guy like myself – but they might want to head in a more accessible direction over time, who knows?  If I was Riverman, I wouldn’t care if one or a million people listened to what I was doing as long as I was able to retain the glorious amount of creative freedom and expression within their adventurous style/sound…like I said at the beginning, it’s incredibly rewarding as an artist to be able to play in a band like this.  Clearly each of these three players are bonded together and fully open to any direction or idea that they may have, and they’re ready to run with it when the time calls.  That’s going to lead this band to one breakthrough after another after another after another – and if that ain’t worth playing for, I don’t know what else could be.  I’m excited FOR Riverman – this is a project that could really go places…but more importantly, it’s a band that could really stick around.

Stay tuned to what’s happening in Riverman by subscribing to their channel at YouTube here:  https://www.youtube.com/channel/UC48Rc_ir1RWBCU2QByOTHKQ