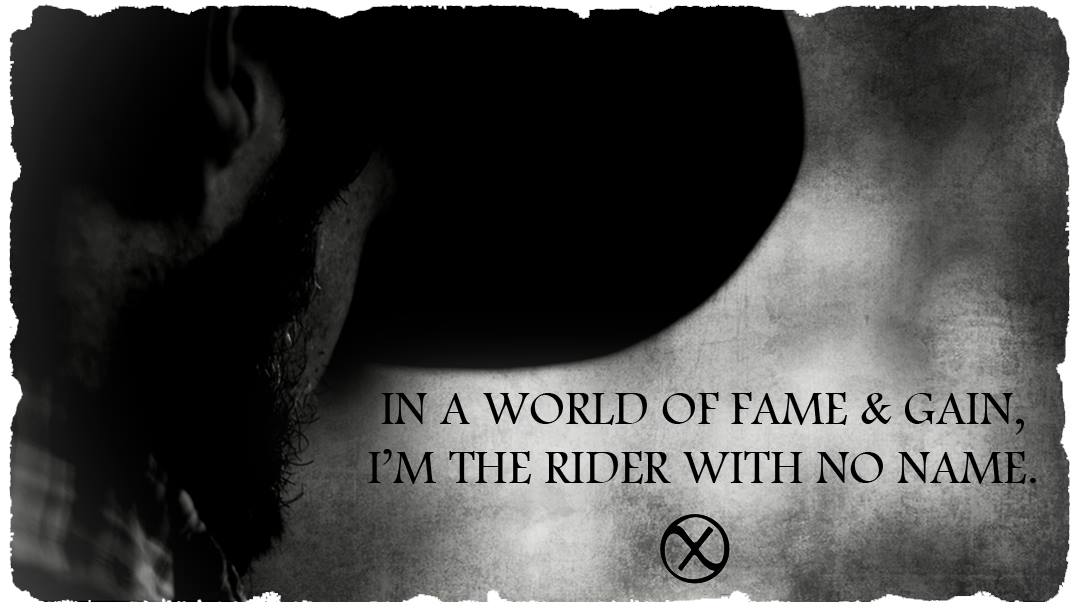 As far as ideas go…this might be one of the most haunting and chilling ways to go about presenting one. Dammit! I left out HIGHLY EFFECTIVE! ‘Cause that’s a huge factor here with what you’ll see & hear in this preview/campaign video for Rider With No Name today here in review. No jokes about the chills – that’s real-talk from me; once this video began to play and the simplistic but massively well-thought-out ideas began to reveal themselves on-screen I was pretty much enveloped in a spine-tingling massage beyond my own control.

Long-time readers & followers of what I’ve done through sleepingbagstudios, whether through written, video or audio work, always attempts to find those artists and bands out there with one of two things I consider very important to making it: something to say…or something to prove. Gotta have one…rare to have both…and if you’re lucky enough, you’ll even have some talent & skills to back it all up…but that’s the extremely-rare triple combo that often only reveals itself to be true after some longevity has been established and we can look at an entire career or body of work that shows it to be fact & not fiction.

Right away…you can tell from the very beginning moments of the new video for “Freed Man’s Creed” that Rider With No Name has something to SAY.

And I’d bet you’d think that would be odd in a way…a Rider With No Name having something to say, yet still hasn’t identified himself when it comes to the very moniker that he makes the music under. So I’ll tell you why it’s not odd…and why it makes perfect sense to me in every way.

You’ll certainly see a personal attachment…personal struggles and eventually a personal promise to pursue all that he believes in with everything he’s got – you WILL see all that in this video…but you will also see that the Rider With No Name is out there, ready to speak on behalf of many people. Speaking out on behalf of the oppressed from the outlaw’s perspective…it would seem that the Rider With No Name might very well be the A-Team in musical-form.

The guitar & atmosphere of the majority of “Freed Man’s Creed” is widespread, open, pensive & cautionary…as the video begins you’ll see the incredible storyline of the Rider With No Name and the journey that’s about to start unfold right in front of your eyes through onscreen messages strewn-about on pieces of cardboard. The messages themselves reveal the personal-side of the Rider as it begins…but you’ll more than likely experience that connection to those words and quite possibly feel the same as he has either now or at some point during your lifetime.

There are those of us who stand up at these key-points in time…and there are far too many that sit down and wait it out, hoping for a better tomorrow. I think…from the artistic nature of the video, to the extremely revealing & sincere messages onscreen…well, I suppose I think we’ve just stumbled upon an artist that really DOES have something to say…and I think we’ve found a musician strong enough to lead the way on behalf of the underdog. I think…that we’ve really found someone that can stand up for those that can’t stand-up for themselves – but more importantly, from those words onscreen and the overall vibe I’m getting from his determined persona…I think that this guy truly means what he says!

Imagine that! In our world! Someone speaking a truth that makes some sense – all on behalf of people that really NEED that voice! I know, I know…you’re all like, ‘Jer @ SBS – you’ve lost your mind; they don’t make people like that anymore.’ I won’t lie to you and tell you that there are true musical-superheroes out there every which-way you’d look…but I’m inclined to say that potentially…from what I can tell with the sample of “Freed Man’s Creed” and the visuals in the video…that rare combination of what it takes to unite the people and get the message heard might just reside in this here Rider With No Name. It’ll be interesting to see where this project heads to and what it sounds like overall; you get a great sample of the Rider’s vocals at the end of the video just before it’s all over. The video itself does a captivating job of pulling you in to want to learn more about what happens next in this journey and mission of music that the Rider With No Name is on. Intriguing stuff to say the least!

You can find out more from the Rider With No Name’s official (and super-convenient URL!) at: http://www.riderwith.no/