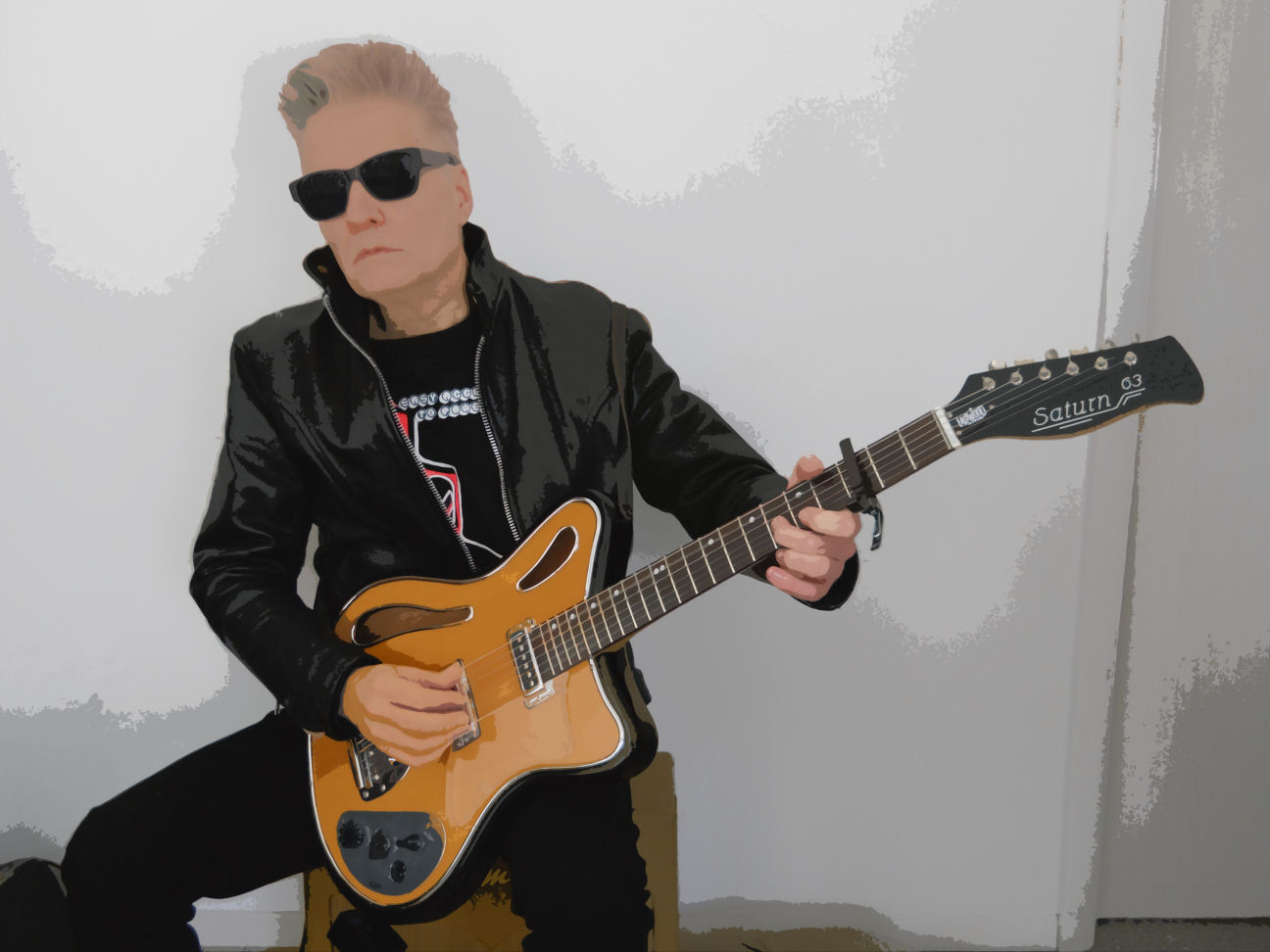 Considering I was bracing myself for something more akin to The Brian Setzer Orchestra…I’ve been breathing a steady sigh of relief listening to the music of Rick Shaffer’s latest album Jitterbug Shake, thankful that I’ve not been taken into the sounds of swing or anything ‘big-band.’ Something about that word ‘jitterbug’ I suppose…for me it conjures up a different sound altogether from the one I hear from Rick; this guy’s clearly based in rock through and through. Much more close to something along the lines of The Rolling Stones, Joe Jackson or dare I even say The Reverend Horton Heat…there’s a clear love for pure rock’n’roll here and a real commitment to the style & sound of the genre’s past. The result becomes a completely textured experience in recording and Jitterbug Shake is an impressive/unique album in today’s modern world; I have the feeling I could play this for a hundred people in a row and not one of them would be able to tell me this album didn’t come straight from the shelf of the 1960’s & 70’s.

Truthfully…opening track “Got To Know” was what drew me to the majestic sounds and comparison to the psychobilly-rock of The Reverend Horton Heat. Like the twisted psychedelic-surf music they made so well, Rick Shaffer starts out Jitterbug in a similar style with far away guitars and a jangly, loose beat. His vocals have incredible character and a charismatic charm that make it endearing like Tom Waits finding his way in a rock song. The guitars are immaculate, as is the recording…with the everything-spiked-up to a classic overdriven sound on Jitterbug Shake, I might be a child of the eighties but I feel like I’m tripping out right into the sixties here.

That being said, I think the opening tune “Got To Know” also might slightly throw you as to what to typically expect from Shaffer in the vocal department. Throughout “Sure Thing” and the songs to follow he’ll tap into a much more purified strain of rock and damn near channel the young soul of Mick Jagger. Garage-blues-rock are words I see describing Rick’s sound…moments like “Sure Thing” go a long way to support that, whereas tracks like “Going Strong” leave behind the blues aspect completely, bring out the tambourines and large-anthem choruses to light up the rock-side of his music fully. I can’t quite put my finger on what it IS that I feel towards the album’s completely fresh sound & free-wheeling atmosphere when I know the sound itself is based so far back in our timeline. I’m sure Rick himself would tell you he’s far from re-inventing the wheel here…but I could make one hell of an argument that he’s patched one hell of a tire to get a classic vehicle rolling smoothly back on the road.

If anything, I honestly think there are times that come so close to old-school Stones music that he’s truly going to run the risk of people under thirty years old just ASSUMING they’re listening to The Rolling Stones! Listen to the roll through “So Tired” – if it wasn’t for Shaffer’s signature style of guitar-work, there would almost be no way to tell; the vocals, energy, performance…it’s all a real nod towards the classic Mick at his frantic-rock best. At the end of the day…those listening with some rock-history behind them will be able to discern the differences between what Shaffer’s doing, but that younger crowd is at the risk of not being able to make that distinction. “Just A Little” would be another perfect example…but man does Rick ever NAIL this sound through and through; with some added harmonica blending into this straight-ahead rock-rhythm, the build becomes a classic one – this is REAL rock.

“It’s True” has some of my favourite guitars on this record. Happily sliding around like a derby-car in the mud, Rick shreds through this song into a distorted glory all the way through to the finish. If anything…this might actually be the closest to my original expectation of what I might have been in for in listening to Jitterbug Shake, but still far enough away for me to be completely happy with what I’m hearing here. Just try and tell me that a track like “Confidence Man” doesn’t hold your interest! When you listen to it…and break it all down it becomes one of the strangest entities in straight-ahead combinations you’re likely to hear this year. It’s like the rolling bass of a song like “Roadhouse Blues” by The Doors, then you’ve got this harmonica with a melody line that sounds like someone singing The Beach Boys “Help Me Rhonda, Help, Help Me Rhonda” – it’s in a different key yeah…but I can’t shake why that’s popped into my head and now it lives there permanently in my brain. Then you take all that, combine it with a Mick Jagger sound and a Bob Dylan-esque song-structure and voila – here you are with “Confidence Man.” What I love aside from the combination, assembly and structure of this track…is that the guitars continually stand out on this record…Shaffer always takes a moment to really let it loose and take a solo moment or three, brilliantly flashing some incredible timing, precision, tone and skill each time.

While I didn’t feel too strongly one way or the other for “Break Of Day” I suppose I felt like this was one track that might have benefitted from a little more low-end to thicken up the recording and bust out of the overdriven tin of the overall sound…but in the interests of cohesion I understand the choice he’s made. It’s very interesting to my ears to hear an album with as much evenness in the amount of intensity of the sound; there are still plenty of dynamics, but the result of the method of recording it all way up like that also leaves little room for anywhere for the music itself to go in terms of versatility in the overall mix. A slight change may have worked here and driven Jitterbug Shake to a larger, expanded or more amped-up sound to the album’s ending…but perhaps not; at this point we know what to expect from Rick and he plays it out like a pro time after time, song after song. Nothing wrong with that and if it ain’t broke – don’t fix it, right? He understands his sound with the intense focus of a studious-pupil of the school of music and knows exactly where his strengths are within his talents; Rick makes the most out of his music by translating his pure desire to ROCK right into his amplifiers.

“Can’t Go Back” finds a real groove and becomes a hypnotic-rock song that’s laidback with a gentle stomping beat that drives the music. Rhythm and performance are all there once again, bending & sliding guitars, solid steady drums and some excellent moments from the harmonica adding to the mix. It’s songs like “Can’t Go Back” in which you can really hear how much an artist like Rick Shaffer wears his style and owns it with confidence. Just because the amplifiers get turned off at the end of the day does not mean that the pure rock’n’roll soul of this man goes to sleep – I’d be willing to bet you could find this guy fully rocking even in a grocery-store or a line-up at the bank.

Point being – you don’t end up this authentic overnight. Rick Shaffer’s Jitterbug Shake is his sixth solo release and it strongly indicates the hand of a seasoned veteran…a person that is out there representing rock’n’roll twenty-four hours a day. “Last Of Me” ends off the album with one final blast of excellence as he blasts through hook-laden riffs in the guitars and vocals. With kind of that wild-desperado feel to “Last Of Me,” you can’t help but feel like you’re listening to one of the last true outlaws of rock…his solos shred and the entire soul of this track is deep, darker than more of the tunes on Jitterbug Shake and a completely satisfying ending to a wicked experience in authentic & energetic throwback rock. Very cool stuff on this album from Rick Shaffer and definitely an artist with a massive amount of talent.