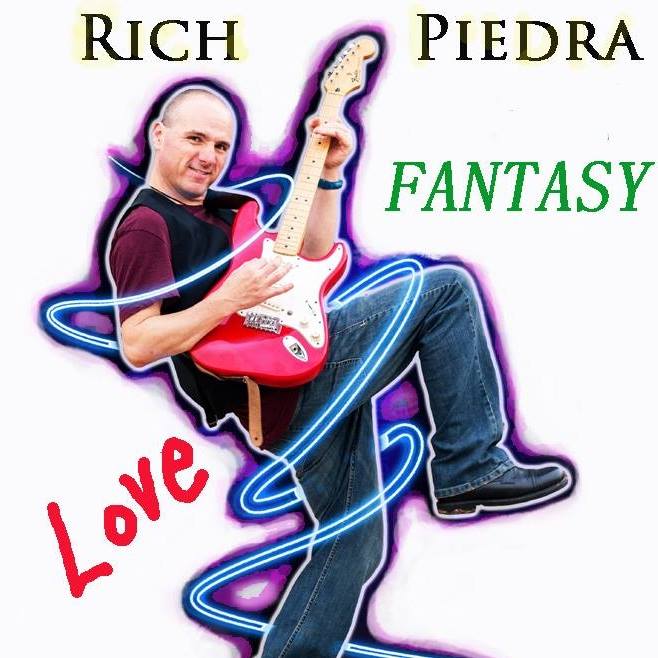 Allow me to play the role of Captain Obvious for a moment and point out the fact that, by album-cover alone…it was a pretty safe assumption that we’ve got ourselves one of them real guitar lovin’ dudes here with Rich Piedra.  Just so we’re all aware – I’m not the one that didn’t say ‘no spoilers’ – Rich has definitely already visually put on display exactly what the Love Fantasy EP is really all about.  With the amps & treble-rock turned up in bright, distortion-filled glory – the enthusiasm Rich has for music is the quickest part to establish an impact…it radiates from the strings and melodies in his energetic tunes.

Is it suited for my own personal taste?  Kind of.  I’ll fully admit…I’ve got love for songs like this that pulls me to the rock-genre pretty hard at times.  It’s clear that Rich has grown up loving guitar-based rock…I mean…I wouldn’t be surprised to find a little bit of Van Halen on his playlist somewhere…so chances are, we’d differ on our opinions there.  You can hear a tinge of love for the big power-rock anthems disguised amongst a somewhat indie approach here on the Love Fantasy EP…but in a lot of ways Piedra reminded me of the pumped-up pop/rock of Marvelous 3 or Canada’s short-lived project from the artist known as Dunk…or even Weezer when they’re letting loose and putting the fun as the focus of their music.  There are comparisons to be made with all artists and bands in some way when reviewing another’s music – but what can certainly be said of Rich’s music is that there’s not a whole lot of this particular sound out there right now in the present day…and that always means a potential opening for new music like this to slide in and fill the gap.

Now…all this being said…do I think he’s got the guitars turned up too loud in the mix in 95% of these tunes or more?  YES – of course I do!  Everyone out there in the world would more than likely agree with that assessment…with the exception of say, like, ALL guitar players out there across the globe.  Again – with the very album-cover giving away the contents, I wasn’t the least surprised to hear it all come out that way…it’s more of a poke in Rich’s ribs than it is any kind of hindrance to the listening experience.  The songs come out raging in melody and energy…the guitars are up in the mix because this is guitar-based ROCK…Rich ain’t messin’ around you know.

The crunch of the guitars and the shuffling of the hi-hat begin the record on “Baby Don’t” – which I thought was a positive start to the Love Fantasy EP.  It’s played aggressively, but the melody itself is a classic one…almost like it’s stripped from old 50’s R&B and then inserted cleverly into the confines of this rock tune – the verse sounds great and the chorus brings it all up to that next-level as it should.  Rich himself sounds great on the vocals here…on this particular tune, I didn’t mind the distance in between the vocals and the music itself…on others later on, it didn’t work for me quite as well.  In my brain…I’m hoping it’s Rich’s love of guitars that’s keeping his voice down in the mix as opposed to a confidence issue – he’s got great tone and a solid grip on melody, great energy and passion in his singing…I’m just saying, I think those vocals deserve a bump or two in the volume department.  PROMISE you Rich…your guitars will still come through plenty-clear!  “Little Lover” is a solid example of the vocals heading into the thick of the music just a tad too much…I just think Rich owes it to the great work he’s doing on the microphone to represent in the mix just as strongly as the instrumentation.  BUT…I have the suspicion that Rich might not see himself in that light the way we as listeners would; in his mind…he’s 100% of the guitar-dude I proclaimed him to be at the start of this review – but listen to the ending of “Little Lover” and you’ll hear that he’s every bit as skilled on the microphone as he is impressive on guitar.  Incidentally…he also has a great grasp of writing energetic hooks that will pull you in one way or the other.  You can try to resist if you like…but kicking & screaming or willingly climbing aboard, you’ll end up with these strong hooks rolling around in your head for days.

As far as I know…”Crazy” is the song he’s been going with as the lead-single from Love Fantasy…and that’s a solid & strong choice.  This was the song that most reminded me of that ‘fun’ aspect of the more rock-influenced songs by Weezer…and especially since vocally, Piedra always makes melody a priority.  “Crazy” is honestly a ton of fun…it’s got a loose, easy-going rock-vibe to it…like an entire college-party inside of two & a half-minutes.  “Crazy” passes by quickly with its distortion-laced rhythm and wild approach – great energy here on this cut.  What I think is potentially missing a little bit in the mix of these tunes are the ‘highlights’ of the guitar-solos…in the sense that the solos aren’t usually put up that tiny-bit louder than the rest of the mix as they’d traditionally be.  Now…that could very well be because Rich has his guitars set to hit the ceiling in the mix of his music…but if that’s the case, I think he still needs to find that extra room.  He’s got some real stand-out moments happening on the lead inside some of these rhythmic sections and again, I think they deserve to be brought to life to spotlight the effort and skill just a bit more than they are.  Other than that though…which is still something you can hear if you’re listening closely…the song is solid and a great choice for a lead-single.

Loved the way the drums started the energy of “Going Insane” and how the guitars came in with an equally inspiring riff.  Definitely wanted the vocals up a bit on this one – I think it’s inarguably one of the strongest melody’s that Rich has written in both verse/chorus combined.  Don’t get me wrong…I always understand generally why this is done…it’s classically for one of two reasons – one being that it makes the music sound even bigger and secondly because it often coaches an even bigger performance out of the vocals when competing for that top spot.  You really get to go for the big notes and hard-parts – and even though he’s set deep into the music, I can absolutely hear that Rich is hitting his tone spot-on and putting real power into his performance.  Great tune though…love the way the vocals work in the chorus and how the song finds its way back to one of the strongest ideas you’ll hear of the riffs that line this record; powerful hooks in the vocal flow rival the power in the hooks of the music and that’s a very nice problem to have, isn’t it?  I thought “Going Insane” was a ton of fun to listen to, bright and bursting with energy at every seam.

Based on some of the things I’ve already said here…Rich probably already knows that “Hugs And Kisses” was the song I’d be the least enthusiastic about personally.  As always, there IS a ton to like about the way he plays his guitar and the solos he creates…the riffs are ever reliable and the slightly different mix on the vocals almost has him sounding like Perry Farrell fronting a hair-band…but I liked that.  The writing itself might have cost this one a little bit with me…it was a bit too straight-ahead rock for me as opposed to some of the more melody-driven pop/rock from earlier on.  “Hugs And Kisses” still has pop-tendencies in the hooks and energy…but kind of like the Ramones might handle it…punk-pop style would probably be a better way to put it.  I appreciate that Piedra keeps the energy up completely over these five tunes and never lets it drop for a second…and I think the solo in “Hugs And Kisses” is one of the finest on the record.  And don’t get me wrong…just because it wasn’t the song for me in comparison to the others doesn’t mean it might not be the number-one experience of the record for YOU personally – I can definitely picture people movin’ & groovin’ on their way to the dancefloor for this track and if that’s your thing, this will make for the perfect ending for ya.

Overall…what I truly did appreciate more than any other element of this EP was Rich’s pure joy and love for making music.  It’s a rare gift that really only a few artists & bands have naturally…that audible evidence that you can actually hear and believe in – you KNOW beyond the shadow of a doubt that Rich Piedra is having the time of his life creating these tunes and bringing his music to life – and believe me, that’s an inspiring sound to hear in any genre when you notice it.  That raw energy, passion and enthusiasm for the love of his craft comes shining through every tune on this EP – I’d go as far as to say I believe that Rich has made music here that he himself would truly love to listen to; he had a goal and a vision for the sound he was looking to create and I think he’s done himself proud with the vibrant melodies he’s riffing to victory on Love Fantasy.