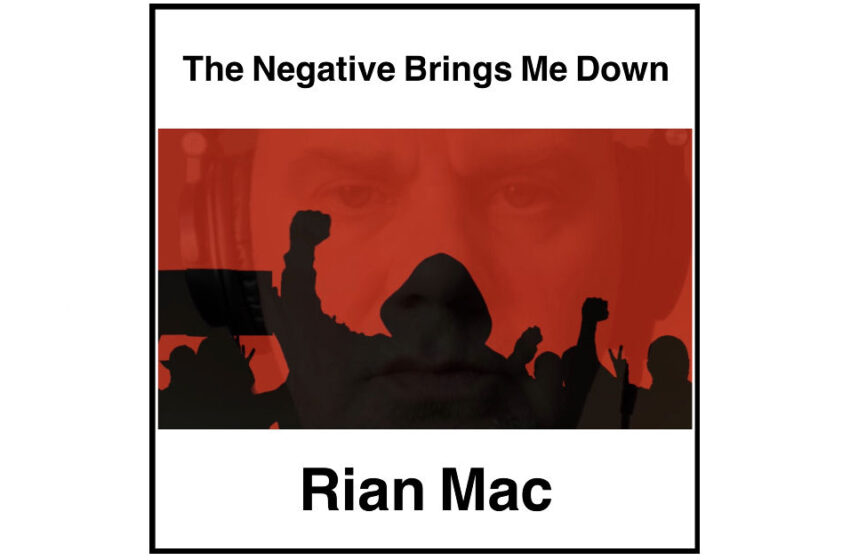 Rian Music – “The Negative Brings Me Down” – Single Review

In the context of staying true to the vision of this mission Rian Mac was on in creating a Peter Gabriel-esque type tune loaded up with thought-provoking societal commentary, insightful observations, and colorful instrumentation – you’ve gotta hand it to the man & his crew of surrounding studio talents for pulling off exactly what they set out to accomplish from day one with “The Negative Brings Me Down.”

It’s definitely sentiment I can get behind – “The Negative Brings Me Down” too, “and the positive lifts me up,” just as much as it sounds like Rian Mac experiences personally, and likely yourself as well.  We’ve all had enough bad news throughout the past several years and certainly throughout the pandemic era as of late…I can’t say I blame this crew for trying to find the sunny side up right now.  Clearly, it’s not easy…not for Rian Mac, not for any of us – and both of which, are represented in the push/pull energy of the song and its lyricism as they reflect on the many issues that affect us all as one.

For the vast majority, the sum total of this track all adds up to a really strong single with many strengths.  I think there’s a solid chance that the words themselves are going to end up being the most dominant trait…it’s hard to ignore the fact that this entire song is built as a vehicle to get the message & meaning behind the lyricism out there into the world, but by that same token, that’s entirely the purpose as to why a single like this exists in the first place.  The musicianship is absolutely mesmerizing and entirely fantastic, from all hands on deck.  I ain’t gonna lie to ya, it’d be impossible for me to choose what I loved more between the brilliant bass-lines and professional control on display from the legendary talents of Curtis Olson, or the stunningly adventurous & radiant tones emanating from the supreme guitar work of Steve Leahy, who goes on an absolutely incredible journey in solos that lines the background of nearly this entire tune at its full-length with very few pauses outside of the space supplied to the second verse.  While I’m definitely not complaining about the rest of anything else you’ll hear on “The Negative Brings Me Down” – those elements I’ve highlighted, along with the stand-out production added by the expert hand of James Gardiner, were the main aspects of what stuck with me most in listening to this single.  As far as its main star is concerned…I felt like Rian put in a solid performance on the mic and holds his own quite capably; I do think that he reveals he’s capable of even more than he shows us here through what you’ll hear in his voice throughout “The Negative Brings Me Down,” but he is also trying to accomplish singing in a very tough energy to get full power across with.  The difference between moments that you’ll find in the lead-vocals slight hesitation around the 1:50 mark, or the tiniest imperfections in the backing vocals melodic fit in the harmonies…it’s hard to say if these organic aspects of this single are going to land as endearing to listeners, or perhaps more problematic, despite the smoothness of the song overall.  It’s important to recognize that Rian Music leave you with precious little to really recommend improving on…”The Negative Brings Me Down” is ultimately a single that’s pretty darn tight all-around, and it’s insightful wisdom, fluid main hooks, and mysterious swirl of vibrant sound is more than likely to have listeners out there fully satisfied exactly as it is right now.  Y’all know me though – there’s almost never a review where I haven’t encouraged an artist or band to find those tiny spots where evolution can still occur in the future…and I’m always the first to admit I might not even know what I’m even talking about half the time.  Having had several spins through “The Negative Brings Me Down,” I can tell ya firsthand that the genuine allure of the melody in the design of the backing vocals generally seemed to win me over as I continued to listen, far more than making me feel inclined to make any substantial arguments against’em, even if I wasn’t always as sure of if they fit 100% of the way through.  By the time I got to this point in writing the review, I was actually convinced they work in a really cool like…early RHCP-type vibe…if you listen to the Chili’s early tunes, you’ll find a lot of unique backing harmonies like you’ll find right here in this tune.  Mind you, you’d be hard pressed to find a song with nearly as much substance as this has lyrically to go along with it in making that comparison to the ol’ Red Hot’s overall.  At least in my opinion!  If you want a perfect example of a band that never chose to round out a million corners, and could have been so much better at just about every stage of their career, take a seat and let me bend your ear, and one day I’ll tell ya the complete story of the Red Hot Chili Peppers in full detail.  For now, what I can tell ya with certainty is this – I like what I’m hearing in “The Negative Brings Me Down” and the insightful way its written.  The knowledgeable way the lyricism is approached in this new single by Rian Music comes from an authentic place of sincerity that’s starkly objective, entirely real & relatable, and sure to connect to you all on multiple levels, hopefully moving you to the point of motivating you personally to be the best version of yourself that you can be going forward from here.  You wouldn’t even make a song like this without the altruistic intentions that would be required to accomplish it with the true conviction it takes to sway a few hearts & minds in the process of making music with serious purpose.  Rian Music has returned with a strong & relevant single here in 2021 that speaks up on behalf of so many important things we should all be considering with the full capacity of our hearts & minds; and if you’re listening between the lines, you’ll find it will also detail the pathway forward to a better and brighter tomorrow.  Making change doesn’t happen overnight and there are tons of obstacles in the way that still need to be overcome – but unified as one, we can accomplish everything we set out to in order to create those better days ahead.  We’re all in this together, and this single reminds us of that, 100%.

The brand-new single “The Negative Brings Me Down” (January 18th) is set to start out 2021 with positive momentum for Rian Music – find out more at their official website:  http://www.rianmusic.com

Tags: Rian Music Singles sleepingbagstudios The Negative Brings Me Down