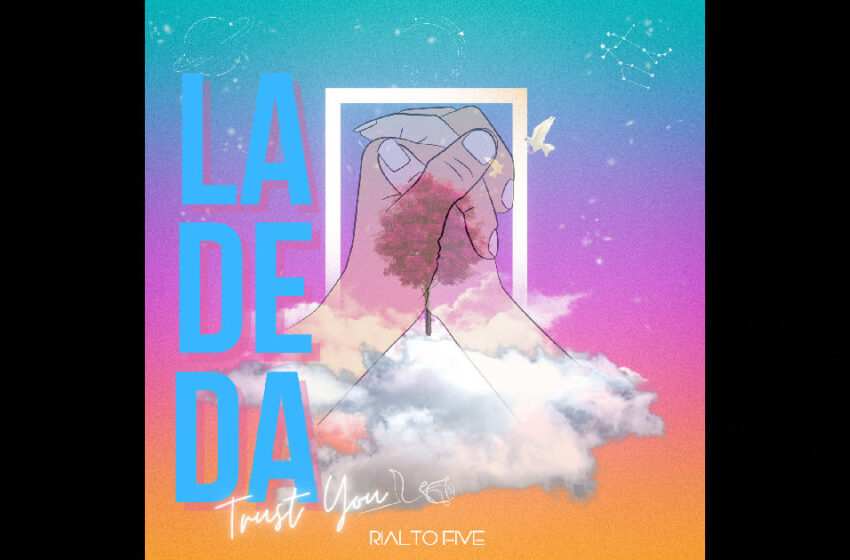 In truth, I know more about who they are and what they stand for than I have any actual clue as to who plays what in the Rialto Five – but they sure seem like heckin’ cool people!  According to their social media & whatnot, they’ve got “4 Gays & A Reverend” making up the core of this band, which includes a brother & sister in Son Jnr & Jess Lovey, in addition to Mel De Mink, Will-O, and the good Reverend Tul.

Armed with light, love, multiple talents, and an all-inclusive attitude that welcomes everyone in to listen.  Rialto Five has definitely got themselves positioned to surge into the next years to follow, with a couple of singles released so far in “Revolution” and “Let It Go” having already circulated strongly around the ol’ online playlists throughout the world, this new cut here called “La De Da (Trust You)” coming out on November 19th, a GoFundMe campaign already rockin’ & rollin’ – and a new EP called Pay Attention? with six tracks on the way for next year in 2022.  Suffice it to say, it’s obviously a pretty good time to be in Rialto Five right now…tons of reasons to be excited about the future ahead, great music coming out already, fantastic band-mates to share the fun with, an addictive sound and energy they can proudly call their own…  I mean heck, if they’re flexible on the name at all, and don’t mind a Canadian tagging along, perhaps I can join up and we can rock as the Rialto Six – because for real y’all, who wouldn’t want in on what these cats have got goin’ on right now?

You know how you watch those talent shows…or see those concerts…you’ve got the whole large band scenario goin’ on, multiple singers & whatnot from the lead to the background…and you’re sitting there listening, thinking to yourself – wait…ONE of these members ain’t pulling their full weight in comparison to the rest?  Vocals might be a little off in one layer of the harmonies, or an instrument that can’t quite seem to keep up with the rest…that kind of thing?  We’ve all witnessed that at some point.  Rialto Five is like the polar opposite of that scenario, whereby identifying any kind of weakness would be downright impossible – the balance of strengths shared between them in their music, and their character as people outside of the music as well for that matter, is impeccable, and reveals a band that is a whole heck of a lot of fun, yes…but make no mistake, they’re built stronger than steel too.  As “La De Da (Trust You)” started up with what almost sounded like a pepped-up & Pop-style spin on Tom Petty’s “Mary Jane’s Last Dance” as their new single began, the warm & inviting approach to their soulful sound takes no time at all to start working its magic on ya.  Chances are, if I’m being truthful with ya, the vibrant personality that you find in the music would have been enough to sell more than half of ya on the band to begin with – it just so happens that Rialto Five arguably stands out brilliantly on the microphone as well with multiple singers in the mix…trust me when I tell ya, you stack all these incredible assets together and they’re a verifiable force to be reckoned with.  Don’t let their friendly demeanor fool ya – when it comes time to play, this is a band full of killers with talent, vision, style, and a sound they can build a whole legacy on.

For real – if there’s a weakness to be found, I ain’t hearin’ it – all I can hear in Rialto Five is the exact kind of uniqueness that stands out, and a BIG sound that’s expressive, colorful, soulful, and radiantly enticing.  The way they’ve got “La De Da (Trust You)” designed with such a smart call/answer approach between the sensational lead vocals and the bold harmonic unity in the backing vocals…I mean, it’s just nothing BUT a smorgasbord of sound, swagger, and style that you’re basically guaranteed to start lovin’ on instantly.  This band is tight…I don’t honestly think anyone listening could remotely even miss that about Rialto Five…drums, bass, guitar…all this stuff shines perfectly – and bonus points for the keyboards on a cut like “La De Da (Trust You),” where you can really hear how this instrument plays a significant role in raising the stakes and creating the run to the finale of Rialto Five’s brand-new single.  All the right skills & talents are on display in all the places you wanna hear’em from the music to the microphone and I’m hearing absolutely zero concerns here…all my ears are hearin’ is green lights ahead for a band full of exciting, vibrant, and dynamic sound that a whole lotta people are gonna enjoying turning right UP.  If I had to hazard a guess…the court of public opinion is probably going to remember the spark in the lead vocals of Son Jnr as the most unforgettable aspect of what they’ll hear on “La De Da (Trust You)” – and perhaps rightly so, let’s be real here, this dude puts in a wildly confident & stunning performance – but make no mistake & don’t get it twisted…it’s just as much because he’s got a band he can completely rely on that helps him achieve results as spectacular as he does here.  It’s one of those genuine cases of real inspiration when it comes to the sound & music of Rialto Five I’d suspect…each player inspires the others in their own way…and that kind of contagious passion, enthusiasm, and interest in what they’re doing, ends up translating directly into a refreshing energy & upbeat vibe we can all enjoy & connect to.

Find out more about Rialto Five at their official page at Facebook:  https://www.facebook.com/rialtofive