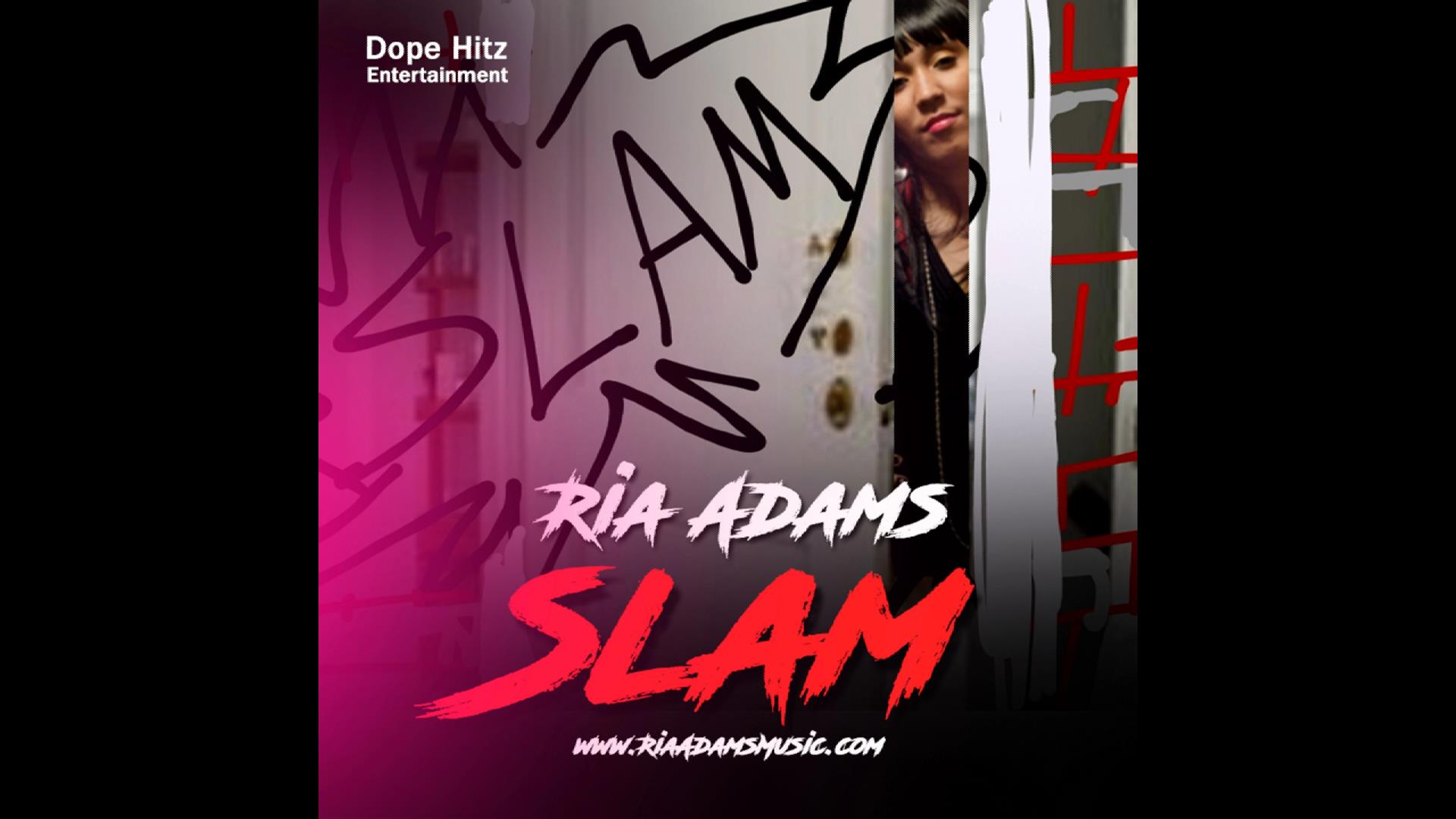 Hey would you look at that, a future electro-pop superstar from Montreal – who would have thought?

Of course, I’m just kidding…about Montreal, that city is well-known for being ahead of the curve when it comes to what’s currently happening or about to happen in music.  What I’m definitely not kidding about is the potential that exists within Ria Adams to find herself in the middle of the mainstream at any given moment…she’s got the ‘it’ factor and a massively confident approach to severely catchy hooks.

Now…it’s long documented on these pages of ours here that Pop-anything isn’t always my strong suit – but that being said, melody always is.  I’m much too old now to pretend that I have any idea of what the kids out there are actually listening to these days, I just know what sounds good to me.  Ria’s clean, crisp & crystal-clear approach to her electro-pop sound is one that I can hear is full of potential; I don’t see any other music on her official site right now, so I’m assuming this is where she’s starting…

With as many pages as I’ve checked, it does indeed seem to be the case that these three singles, “Another Boy,” “Jealousy” and “Slam” are the first three songs to go out there from this new breakout artist – so in considering that, you gotta admit, this is a hell of a place to start.  Assuming she’s like most artists out there and going to continue to get better, Ria will be a force to be reckoned with over time.

After giving these singles several spins, I think Ria Adams has done a great job of putting out tracks that speak strongly to the different dimensions of her sound as well as her ability to adapt to vibrantly energetic electro executed in a variety of ways.  Accessibility-wise, I don’t think there’s any argument that the first single on her page, “Another Boy” is by and large the most ‘complete’ of an idea and most likely to make the most immediate impact on listeners – but she’s got aspects of each song that work strongly in her favor & are bound to snag listening ears from all over the place through her stunning sound.  For instance, “Jealousy” had me busting out several dance moves I had NO IDEA that I even had!  No joke…I mean, the song is a serious one of course, but the beat is so damn well executed, playful and FUN at the same time that I was cracking myself up here, inventing new moves of all kinds that are bound to never be seen again by any living soul.  This was a moment for ME, inspired by Ria’s radiant beat on “Jealousy” – so I took it, happily, for all that it was worth and got right down.

Finding the right person in life to love is no easy task.  “Another Boy” details the struggle through Ria’s perspective and a powerfully bold vocal melody to express her thoughts.  There MIGHT be one line I felt like she could have nailed just a bit better…MAYBE…but for the majority of everything I heard, Ria just gets better and better as “Another Boy” plays on from its verse to chorus, breakdowns and finales and everything in between.  The hooks are on display at every possible moment – and the chorus of “Another Boy” takes Ria’s vocals soaring into the atmosphere with brilliant tone and confidence leading the way to a stunning performance.  The way she expands her vocals and opens-up in the chorus is highly, highly memorable; overall, I think writing/sound-wise, “Another Boy” will certainly remind you of other, similar electro-pop tunes you’ve heard before – BUT…I think it’s through Ria’s commitment to performance and her biggest moments vocally that’ll separate her from the rest of what’s out there.  Besides that, as I often say, there’s nothing wrong with more of a good thing when you find it – ultimately, I think identity generally comes from longevity and having a whole bunch of material out in the world over time…Ria will continue to develop that over these next years to follow for sure.  Right now, she fits right in with a lot of what’s current in the electro-pop sound/style out there and there’s certainly nothing wrong with being right there at the forefront of what’s happening.  Pop is one of the hardest genres to establish identity and separate yourself from the pack…Ria’s got the potential to do it, but of course, it’s time that’ll tell the story there.  She sings “Another Boy” with the heart, sound & skill of a veteran of the music-scene and the more she believes in her abilities, the better she’s going to get; right now, it’s certainly a fantastic first impression.

“Jealousy” is NOT the kind of song you’d normally find me attached to…that’d be obvious to anyone that regularly reads this page and has heard this single from Ria Adams.  I spend a lot of time in Rock, Folk, Metal and dedicated Electro, usually IDM tunes…there’s no doubt to my ears and to my readers that “Jealousy” shouldn’t be something I’d love, yet here I am, telling you that I DO love this cut.  I don’t know that it’s as highly-accessible as “Another Boy” was…I think she heads to a lot more of a ‘club’ sound on “Jealousy” – but whatever or however you choose to describe it…don’t try to tell me you’re not busting out your own moves along to this cut!  So while she might narrow the potential audience a bit more with this second single, I think those that really dig their music with a danceable vibe are going to freakin’ flock to this cut and mob the dance-floor whenever it comes on.  And maybe there’s no narrowing of an audience happening whatsoever anyhow…when you think of the fact that Ria has won over a crusty, old, bearded-dude like myself with “Jealousy,” there’s gotta be at LEAST a few more of ‘me’ out there that would proudly crank this up, wouldn’t there?  I like to think so…or at least that’s how I comfort myself whenever I hear something so far removed from what I’d normally listen to like this is.  But facts are facts, she’s got me on her side here & feeling the vibe…I’m positive I won’t be the only one.  Ria displays an impressive vocal-range…she’s doing excellent in the lead and you can hear her making key additions subtly in the background layers along the way.  “Jealousy” might be a bit matchy-matchy between the flow of her vocals and the flow of the music, but when they’re both matching up their energies to something A-grade overall, it becomes pretty difficult to feel like you can complain.

“Slam” was probably the one of the three that I had the most mixed reactions and feelings towards.  On the one hand, I think the hooks on this cut might be the most universally appealing to ears out there – the way she starts this cut is AWESOME and the chorus she drifts into is perfect; on the other hand, structurally-speaking, content-wise and perhaps in the breakdown, I felt like there was a bit more missing by comparison.  The main hooks…that chorus of “Slam” is intensely addictive, vibrant, bright and wonderfully rhythmic through its main acoustically-driven approach to electro-pop.  That’s where I think things are going extremely RIGHT for Ria Adams…I think the verse is highly-stylistic and pops out in all the right ways as well.  There’s a youthful sound and spring in her step here that’s got an audible energy and enthusiasm to it that you can feel…and of course, depending on the audience she’s looking to capture, this might be right where the crowd listening to Ria is at.  “Slam” would definitely be a tougher sell to the older people listening; whether it’s the complexity of the music itself or the youthful approach applied in moments like the breakdown just past the two-minute mark, she does run more of a risk here of completely catching the attention of those that love the sound but also creating a more exclusive sound on this tune overall.  The way I see it, if she’s just getting started & all, then having a youthful sound is all part of how it goes…and again, it’ll lead to plenty of potential for Ria to continue to develop her signature style as her music refines itself over the years to follow.  As it stands right now, I can’t imagine asking more out of a performer in a debut scenario, especially in the electro-pop genre.  Ria displays a ton of genuine commitment and enthusiasm in her approach to each of these three singles – and I’d be willing to bet that those main staples of her music will always be there to provide your ears with real entertainment no matter which way her sound & style shift throughout the years to come.

Undeniably, this is a great start and Ria Adams has a very bright future ahead of her if she wants it – and I’m 100% positive that you’ll hear she truly does in the way that she’s brought it to these first three cuts.

Find out more about Ria Adams at her official website at:  https://www.riaadamsmusic.com