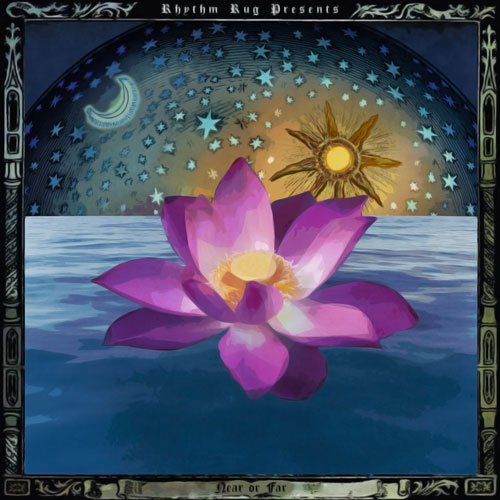 RhythmRug – “Near Or Far” – Single Review

After having been introduced to the music of RhythmRug a couple months back through the single-review of the song “The Giver” – it was fair to still not quite have an idea as to what to fully expect when getting my hands on the new-single called “Near Or Far.” The previous single was inoffensive, but also anything but typical…so in reviewing RhythmRug this time around, I suppose all I could really expect was the unexpected…

Upon listening to the new-single I discovered it could just as easily have been called ‘Near And Far’ – this is truly like two-songs in one with a dramatic switch in tone & turn in the middle of the track splitting it fairly evenly between the two defined-sides of the tune. With a gentle, atmospheric electro-glitch beat leading the way into the misty-mood of “Near Or Far” – RhythmRug comes up closely throughout this first half of the tune as the beat comes up in intensity, rising towards the end of the first two-minutes. This would be the ‘near’ musically…especially comparatively to the second-half of this new song.

Stripping away the sounds for a moment…a slight pause/break takes you into a synth-piano lead that sounds beautiful, but ‘far’ away. The vocals come out sounding sweet & innocent in their observations and lyrical-narrative…they become much more of an instrument added into the song and melody over the course of its second-life from two-minutes forward. Largely this latter part of the tune is instrumental…I really dig the tone and mood of the music; it’s a little more reflective, a little more melancholy in its melody…all subtle and nothing overdone. RhythmRug has done an excellent job of keeping the focus-up and making every element in the music stand-out from the synth-bass-lines added in to the additional electro-elements that randomly show up in the song.

I can fully admit to not quite getting how the two ideas are related to each other, but each one presented a strong piece of writing bonded together by its title…I’m just not entirely sure what else. I’m also not entirely sure that it totally matters, or if the relationship between the two is supposed to be any kind of obvious whatsoever…any link I could make would be presumption and nothing more. Unless the point is being made through the music itself with its defined ‘near’ and ‘far’ parts of the recording, in which case YAY ME I got it!

Whether it’s entirely known to RhythmRug, or whether it just felt right to put the two contrasting pieces together…again…I’m not sure that it entirely matters given the interpretive-nature of listening to music and how we all take it in as individuals anyhow. “Near Or Far” is bound to mean something different to RhythmRug than the rest of us, my meaning different from yours, so on and so forth…but that’s the beauty in music, isn’t it? The point being that the song at least makes me ponder and marvel at its assembly, structure and idea…it makes me think…and as odd as that may sound – I do enjoy that.

Find out more from these fine RhythmRug online establishments!