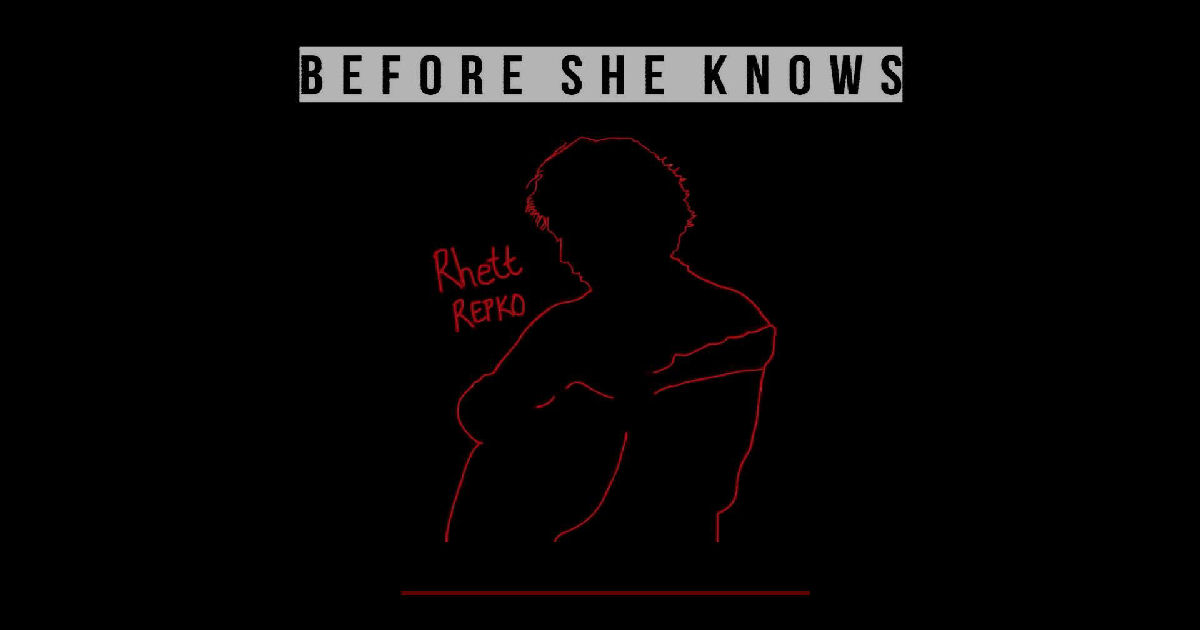 No surprises here – Rhett Repko’s got himself another catchy single out there in the world!

It was sometime in the summer of last year that I was first introduced to this band’s music through the single “Were You Ever Really Mine?” in 2017.  There was something about the impressively stylistic & flashy sound of that song that definitely hinted at the high-level of quality you could expect from this artist over the years to follow…and I’d argue he’s making good on that potential & promise on his latest jam “Before She Knows.”

I mean…I don’t wanna get too nerdy on you guys…but LISTEN to the way this song begins with such incredible energy in the air surrounding the storming drums & guitar riffs…you can HEAR just how awesome a song like this would work in a live setting.  It’s gonna be badass right now in the early stages of Rhett’s career I’m sure…but like, IMAGINE when this guy becomes as HUGE as this song is and how insanely cool the light-show that could accompany this song could be!  It might seem like dreaming or wishful thinking…but honestly I’m not so sure – Rhett Repko sounds like he could verifiably be called up to the major-leagues of the mainstream at any given moment.  I’m just saying it might not hurt to dream big if you’re in Rhett’s shoes…it might be a good move to map out the lighting sequences and get some of them cool filters & strobe lights for the moment that phone call from the suits’n’ties comes in.

Seriously cool jam going on here.  “Before She Knows” is really structured to deliver a maximum impact.  Right out of the gate this new single is intensely engaging and immediately displays hooks sharp enough to snag anyone within earshot.  The verse is impressively designed with a badass vocal flow, drifting right into the ever-present coolness in the Repko signature sound that fuels the vibe in the chorus.  Right around the ninety-second mark, you get the honey-spot…the guitar solo is damn near altogether too short and entirely killer – I could have used another you know, fifteen or twenty MINUTES of listening to Rhett riff it up…but that’s nearly a given, the man slays the axe.  I think what’s even more impressive this time around with this latest single from Repko is the writing itself; it’s still drawing on an old-school cool, but it felt like “Before She Knows” was much more modern and relevant for what’s out there right now on the people’s playlists.  The solo CRUSHES…short and spectacular, launching the band into the stripped-clean breakdown before bringing back the main hooks with even more punch as the band heads confidently to the end of this cut.  There’s not a single moment of “Before She Knows” that feels like the band is out of control…you can hear the genuine professionalism that exists in Repko’s music, which, when you consider how rad it is to listen to, is actually quite impressive for it all to retain its authentic attitude and still come out sounding like it has life running through the veins of the writing.

Calm, cool, & collected – even with the frantic themes of the lyrics expressing just how much change might be required to succeed in life & love – the rhythm and groove of “Before She Knows” certainly speaks on behalf of the reliable rock this dude can pump out there and continued evolution in this artist & his band.  I liked what I’ve heard in the past…but this…THIS…is pretty much undeniable on all fronts…I really can’t imagine someone out there not digging the vibe of this new single.  Tone-wise & production-wise, you just can’t beat it…the way the drums & bass sound is off-the-charts and the guitars are just as incredibly immaculate to listen to…the definition that exists in the music and sound of Rhett Repko is so top-shelf that you’d have to get on a ladder to reach it.  “Before She Knows” definitely proves this guy is on the right path without a doubt – and it definitely provides the rest of us out there listening with a killer cut just in time to be a solid addition to our summer soundtracks.

Find out more about Rhett Repko at the official website:  http://www.rhettrepko.com