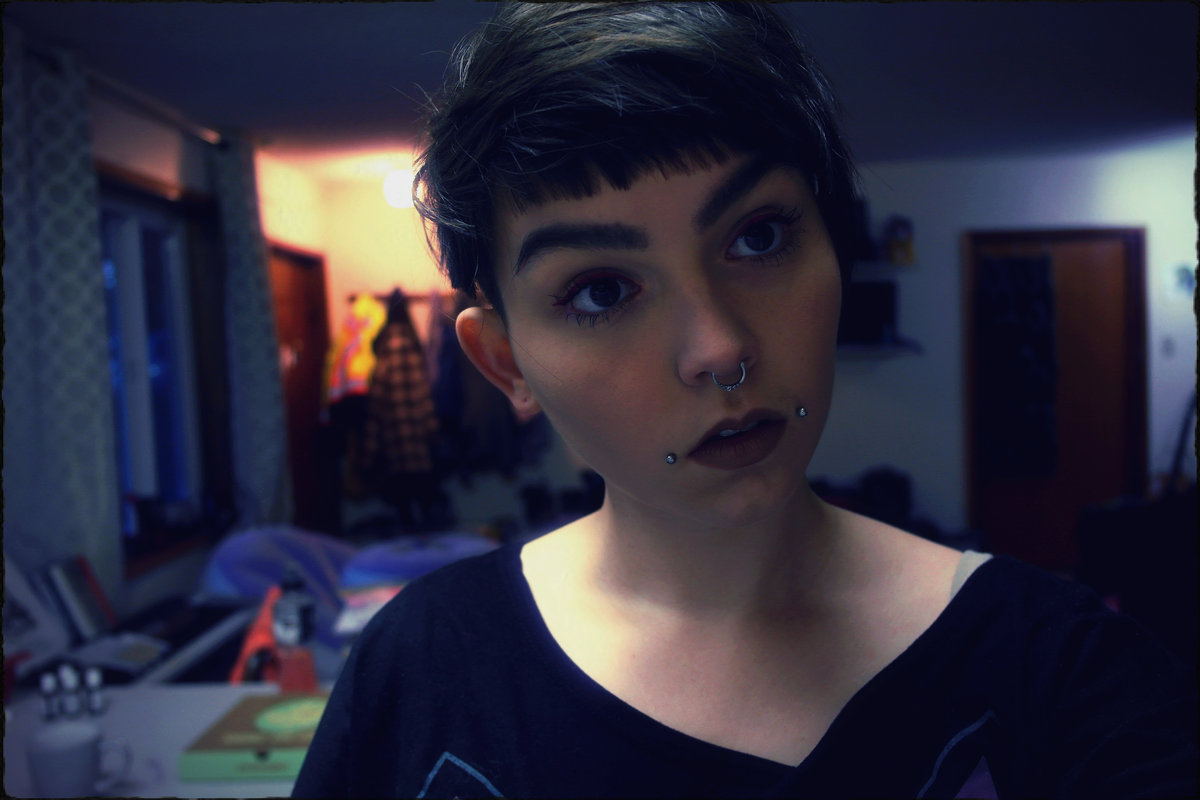 You know…sometimes I can’t help but catch a sentence or two of what someone else has written about an artist before listening to the music.  I do my best to do the opposite…I’m a listen first, form my impression and then attack the social-media & learning about an artist if I didn’t feel like I learned everything I could through the music alone.  But sometimes, as I’ve mentioned, you end up on pages that have pieces of information from other places…which is kind of what happened here with listening to the new single from Retrogress called “Penitent” – and the comments I did catch on this artist from my old home-province of BC in Canada definitely paint a picture like Dali or M.C. Escher would have.  I didn’t dig any further than the tiny promo-clips I was reading…but clearly Retrogress wasn’t going to become any kind of normal experience from what I’d already read…and of course, like all the beautiful, different, weird and wonderful artists we meet along the way, you know I’m interested in anything that’s not following the path already relentlessly beaten and worn.

After listening to “Penitent” for myself…I can understand if she’s been labeled as weird, or as an outsider – I can ‘get’ that…but I’d also be willing to bet that most people out there, reviewers & critics included, are likely missing what’s really happening here with Retrogress.  I’d be willing to bet that most people are stuck on the strangeness of it all, rather than embracing the bizarre approach and its beautifully-dark uniqueness.  There’s real art happening here…and that’s the part I’d expect that many would be missing.

Because look, I’ve read these lyrics many, many times over; I’ve read them as a listener, and I’ve read them as a ‘writer’ myself.  The amount of thought behind these lyrics, no matter what you may/may-not think about the content & subject, but the thought & care behind the structure itself should be convincing enough to warrant a listen or two.  There’s no doubt about “Penitent” being based in a dark & curious atmosphere…but there’s also no doubt about the amount of poetry in these words.  I haven’t heard other music from Retrogress yet…and I don’t know that the innocent childlike vocals are a standard or if they’re just used here in bold-contrast to the darkness in the lyricism – but I can tell you that this single works really, really well in all the oddest & best of ways.  This I know.

The synth-key melody is sweet, slow and emotionally-pensive…as if it’s all being played after each thought in the lyrics spills its bloody guts into the microphone.  The approach to the vocals themselves is so blissfully unique and refreshing…the way they twist and turn this melody into the most bizarre lullaby isn’t just a fluke, there’s an intense understanding of music here – and what ‘different’ is truly all about.

It’s completely artistic, all the way through…and quite honestly, it’s kinda spellbinding in how much this track and its sparse music really holds the attention.  Something as different as this takes SO LONG to catch on…and it’s my true hope that someone like Retrogress is receiving more encouragement to continue on this path from the rest of my peers out there…because music can ALWAYS use another champion like this.  Retrogress is going to take slings & arrows of all kinds in pursuit of art like this…because generally-speaking, people aren’t going to ‘get this.’  Not because they can’t handle the concepts…not because the words are too dark or gritty in their imagery – simply because there aren’t any kind of traditional hooks to pull them in whatsoever…and it’s not exactly something to sing along to.  It’s going to be a constantly-uphill battle for Retrogress to win over her fans…but each person that stumbles onto this and likes it, well, we’re going to become fans for life.  Notice how I included myself in that last part.

Reason being that I really appreciate a skewed perspective…and I certainly respect Retrogress for having the commitment to follow her vision and own the path she’s walking on.  Actually…scrap that ‘walking’ part…I’m pretty sure she probably just eerily floats wherever she travels, all ghost-like & haunting everyone, including her friends.  Just a theory…but you get the idea – I think there’s a real courage and bravery displayed when going against the grain like this.  She sounds like a combination of Tanya Donnelly and Kristin Hersh…it’s innocent but completely strong and in control of every tone and every moment.  I love the way she’s matched this sound to the music, as strange as it may very well be.  Dug it more on its own than layered with the low-vocals at the end, but I did dig how the energy in the vocals also comes up during this time to really get those poetic words across and make them heard.

My experience in reviewing tells me that you won’t likely hear another song like this all year long – or at least not unless Retrogress decides to release more music.  My experience also tells me what a great thing that can be…but also how lonely it can be on the road ahead.  I’m concentrating on sending all of my will & focusing my mind-tools towards Retrogress in effort to tell her to PLEASE continue making her music, no matter how hard it gets.  True artists so rarely come along…real & unique perspectives that have totally been unheard of before are just as rare…and when you find a combination like this that contains this kind of merit and artistic integrity…well…at least in my opinion, it’s not something you can let go of.  I think Retrogress is potentially capable of captivating the world through her bizarre-but-stunning perspective and melancholy-but-beautiful music; she certainly has made an impact on me.

Have a listen to the other music out there and available from Retrogress at her bandcamp page:  https://retrogress.bandcamp.com/