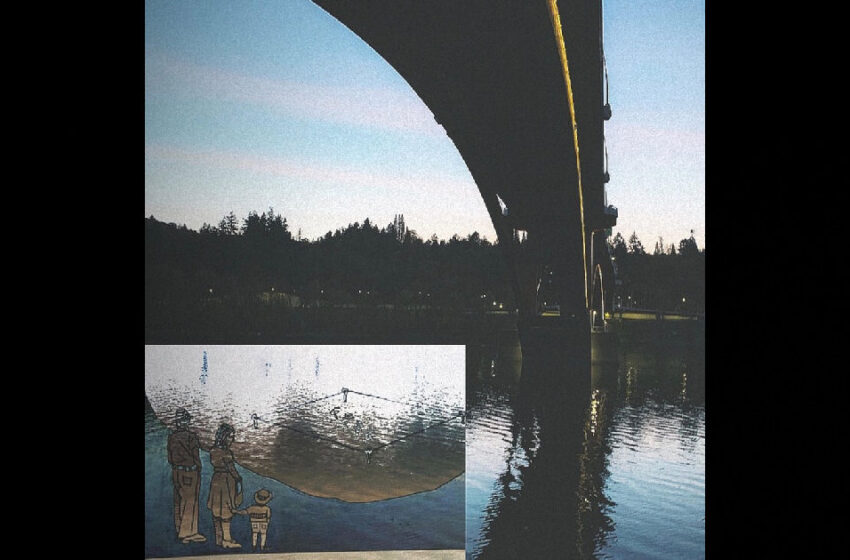 反覆墜落 Repeatedive – A Beautiful Place To Get Lost – EP Review

I’m always interested in what this dude is up to.  It’s no secret that I’ve experienced a few ups & downs in listening to & reviewing his records from his other project Lounge Act Jam, even recently on the latest EP I just checked out last week called Everything I Cherish Easily Disintegrates Into Dust At The Lightest Touch – but that’s usually a case of technical production stuff or different taste in stylistic choices.  For the vast majority of what I’ve heard from Yang, the dude has presented a ton of truly unique ideas and really embraced the spirit of what making music is really all about – and that’ll always have me listening.

And let’s be real here…we all know of those bands & artists out there that love to experiment & try a full range of things – it’s been proven many times that when Yang gets it right, he really gets it right.  Largely it’s always been a choice he makes whether or not to play & sing something straight-ahead, or if he feels like getting completely wild with it all, which he quite often chooses to do.  Both of these different directions always yield something well worth your time to listen to, and his unpredictability traditionally keeps us guessing…he is one of the more genuinely curious entities out there in the music-scene today, and through his music, he ain’t afraid to get downright weird with it in the pursuit of doing something new, you dig?  You know I’ve got love & respect for that…this dude isn’t just a musician, he’s an artist.

All that good stuff being said, this ain’t ALL about him…not this time – 反覆墜落 Repeatedive is a full-on band where he’s joined by the bass of Brian Chen & the drums of Baron Jan.  And you know something?  These dudes from Taipei are completely capable of kicking out the jams, 100%.  Make no mistake, the Yang factor is always going to play a huge role, he’s just that unique as a performer and guaranteed to snag a lot of attention being the front-man & all – but the band he’s rockin’ with here has an impeccably tight rhythm section that damn near can’t be beat as well.  Like, listen to the badass bass-lines of Chen on the opening track, “Big Blue” – you can hear the technique, tone, and confidence…the same goes for Jan’s drumming, it’s innovative, inventive, even a lil’ jazzy at times with his imaginative beats & skillful musicianship…to me, listening to this opening track was a complete confirmation that YES, these guys can seriously PLAY.  They’ve got themselves an authentically fresh sound with highly spirited vocals & musicianship – and 反覆墜落 Repeatedive makes it instantly clear they’re ready to do things differently.  Hearing Yang riff it up from the guitar always gets the energy flowing, which works really well between the verses of this cut…and vocally – listen to how INTO IT he is!  Spots like around the 2:10 mark & 2:30 mark that show the dude just feelin’ the vibe and GOING with it, wherever it takes him.  You don’t NEED flawless tone when you choose to sing like Yang does – and with respect to that, he’ll always prove to you at points in every song he’s more than capable of putting in flawless melody when he WANTS to – but that’s not what moments like “Big Blue” are ever all about.  Tracks like this are completely about feelin’ it and lettin’ the music come right out of every pore of your body…me might “just be crawling through this thing called life” and comparing himself to a worm lyrically, but up front on the mic, Yang becomes superhuman with his confidence, and time after time proves to be a force of real uniqueness.  Plus, like…listen to the strut & stroll they’ll take you on in the breakdown around the three-minute mark – the slickness right there alone is worth the price of admission, and the burst back into the hooks has 反覆墜落 Repeatedive coming back to lay down their wildest moments before it’s all said and done.

Whereas a song like “Big Blue” pretty much defies any kind of categorization whatsoever, 反覆墜落 Repeatedive heads into more decisively Indie/Alt-Rock terrain on the track to follow, “Running.”  What’s not to love about the radiant energy in this song?  Yang is crushin’ it with killer guitars on this second cut, the bass-lines from Chen are beyond incredible once again, and Jan literally never quits being creative back there on the throne either – as thrashing & rambunctious as “Running” is, it’s also a song that really peels back the curtain to reveal just how tangible the relationship between these players & the way they play truly is.  You essentially can’t listen to a song like “Running” and not come to the conclusion that they’ve got something savagely special between them as friends & musicians that allows them the comfort & confidence to go after every inch of their music without fear of any judgments.  As a result, you get incredibly wild cuts like “Running” that show just how much that approach pays off in a performance, and the X-factor of 反覆墜落 Repeatedive gets exposed even more – they’re so into their music that as listeners, we can’t help but wanna be right there to experience everything along with’em.  Technically this record came out last year, but if I were this band, I’d still be looking to pump this track out there as a single & gateway into their music…all-in-all, “Running” has a solidly irresistible vibe to it that comes from the sound of the pure joy these dudes clearly feel when making music together.  They might still have the often introspective & isolated lyrics that roam through a series of emotions when it comes to the words, but you can’t hide the enthusiasm & spirit that 反覆墜落 Repeatedive brings to the way they play.  “Running” also has a brilliant moment around the 2:20 mark in the bridge that…man…I don’t know how they didn’t manage to milk that spot for a whole minute longer or make it into its own song with the strength of the hook you’ll find there, but as it stands with its small place in this tune, it makes for a massively memorable highlight.  They even get a like…Offspring-esque sound outta the chorus in this cut, which was probably just about the last thing I thought I’d be writing here about this band today…you don’t often get too many moments with the music of Alan Yang that are comparable to much else, so I have to take the opportunity when it presents itself, however brief that moment may be.

Here’s what I can promise ya, and a large part of what I love about A Beautiful Place To Get Lost overall – there’s really something for everyone here on this record, somewhere.  Like for example – I was already pretty well sold on liking a track like “Sad Song Of The City” enough with the shimmering guitar tones ringing out in the verses…but it wasn’t probably until around the two-minute mark that I became convinced I didn’t just like this song, I was loving it.  As the sound thickens & the band combines their talents, the wildest moments of “Sad Song Of The City” completely add a whole new dimension to this song as they transition through what’s certainly a loose tune, but purposely loose, & yet still captivating!  Steady & reliable bass-lines from Brian lead the way in holding this cut to its timing – and when you hear how the song itself shifts around where it’s on its way into the two-minute mark, that payoff you wanna find is completely there.  The chorus of this cut is laced with a brilliantly gritty melody that has energy, intensity, and real sincerity at the core of it all.  The bulk of “Sad Song Of The City” moves at a fairly slow pace & keeps the energy pretty low-key…which only makes the effect of how they explode into the chorus all the more addictive if you ask me.  I wouldn’t expect “Sad Song Of The City” to quite make the impact of the three tunes surrounding it, but it’s still more than a valid contribution to this EP’s lineup.

Yeah…you know…like…I get it – there are gonna be some of you out there that read my words, listen to the music, and literally go HUH? in response…I ain’t gonna dispute that this can definitely be an acquired taste to a degree…at least at points along the way; like I said, there are moments of accessibility within each & every song.  But to me, the uniqueness is so incredibly key – and Yang brings so much of that to the music he’s involved with every single time, that you have to acknowledge the fact that, creatively, no bullshit, he exists on a plane that many of us will never even get close to reaching.  So when I hear a hook like the one “Afterparty” starts out with for the first time, I naturally think to myself, ‘wait – has he lost his damn mind?’ – because you KNOW there’s about a million different ways he could have approached the vocal hook, and the one he chooses doesn’t instantly sound like…well…I suppose it doesn’t sound like the way things would be, if they were ‘normal’ – which Yang and 反覆墜落 Repeatedive most certainly are not to begin with.  But this is what I’m saying…watch & listen to what happens…because I’m tellin’ ya, the next time you hear what he does, you’ll experience it in a totally different way, if only due to the fact that your ears are now more prepared.  Suddenly you’re singing the hooks along with him, and wondering how in the heck you got here from all the way over there.  There’s never a reason not to rock things in your own unique way if you can do it with pure conviction – in fact, it’s the only way to go if you’re looking to create something that goes beyond music, and becomes art.  Tracks like “Afterparty” are proof that Yang’s own unpredictable signature style produces addictive results – and plus he’s crushin’ it with some of his best guitars on this final cut too, which definitely doesn’t hurt whatsoever.  With the rhythm section as tight as ever, Yang’s made a smart decision by joining forces with Brian and Baron…you can hear how the confidence in the musicianship surrounding him has played a significant role in bringing out his creative best here, through all four tracks they’ve played.  In perhaps the most surprising moment you’ll find on A Beautiful Place To Get Lost, Alan will light-up the mic with the fiercest vocals you’ve heard from him to-date in the middle of the song, and then once more again in the very final seconds before “Afterparty” let’s go of its grip on us & finish the EP on its most extreme highlight of intensity.  Versatile AF this band is!  反覆墜落 Repeatedive completely made this entire ride well worth taking & I’m seriously stoked about what they’ll go on to do next from here.