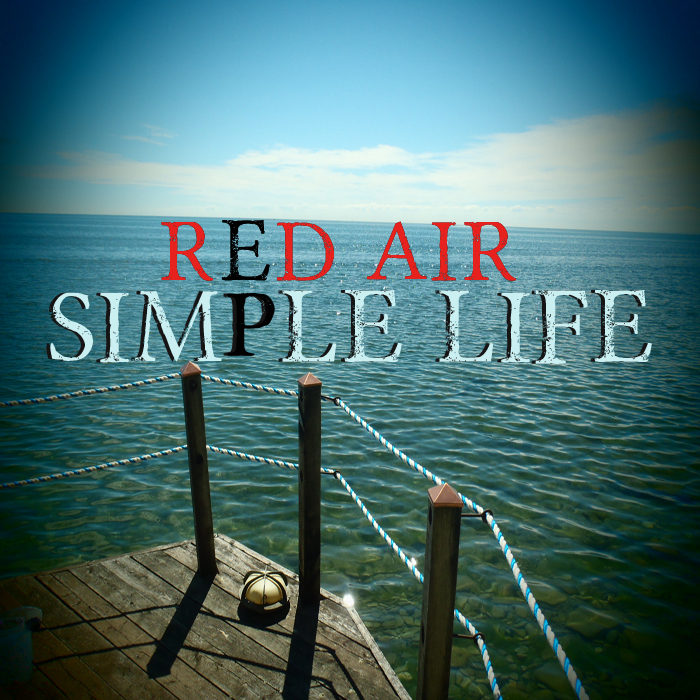 Toronto, Canada’s own modern-pop/punk band Red Air braces frantic, intense vocals amidst hook-laden guitar-riffs their own brand of amped-up anthems. You can definitely hear the influence of that alterna-punk era; they’ve listed bands like Sum 41, Ramones, Rancid and Blink 182 on their social media pages as a few examples of bands & sounds that have made an impact on the members and their sound. While Red Air has moments where you notice those influences more than others in their music, I still felt that the Simple Life EP retains a newness to the music and a sound that is much more their own than that of any comparison through their combined styles.

That being said they’ll certainly need to be ready for a few comparisons coming their way even if they’ve managed to come out victoriously with their own sound at the end of the three songs – you just can’t start out a song like they have on their opening/title-track “Simple Life” without receiving a comment or two about how those beginning moments remind so-and-so about such-and-such Blink 182 songs. More than likely settling on a song like “Dammit” for the ultimate comparison…Red Air begins to do their own thing within thirty-seconds, largely due to the difference in the vocal sound. Were it left up entirely to the band…part of me worries that a song like “Simple Life” would have them blending into the sea of sameness, floating away in the middle of the madness. I really dig on the guitar-solo and eventual breakdown in this first-cut…and the full-speed drive to the end is definitely memorable; Red Air starts out this EP with fantastic energy, confidence…and honestly I really do dig on the vocals of this band a lot…I think that’s going to be what can really set this band of four apart from the rest.

I say this because I can’t recall hearing many bands that have a sound like this upfront. Maybe they’d have the style, but not the tone, and vice versa… I think the vocals in “Heavy Mind” are more than commendable…this is a powerful performance that should be recognized for the controlled-chaos that creates its magic. “Heavy Mind” has melody, thrashing-emotion and a powerful performance that is created through the wild performance & deadly-delivery upfront on the mic…if anything here, those vocals remind me somewhat of Billy Talent or perhaps even British Columbia’s own Blackout Lights and their frontman Steve Barmash. Billy T is always pretty much going to do what they’re already doing – but both these independent bands seem to have the ability to turn up the alternative, the pop or the rock in their music at sheer will, and both definitely have a singer up at the front with a fantastically real, raw and authentic scream that matches the energy and mood of their music perfectly.

I’ll put it this way when it comes to the Red Air Simple Life EP…I enjoyed every song, there’s no doubt about that…but I did find that I probably identified the most with the pure-rock energy of “Heavy Mind” more than the rest. At least I think I do…

Cause you see…that’s just the thing isn’t it? Maybe out there…maybe you’re just like me…maybe you’ve always done EVERYTHING in your power to resist bands like Blink 182 or Sum 41…and failed multiple times. There have been numerous songs from both of these bands that I thought I’d easily be able to write-off and never listen to again, only to have them become a dominant sound on the radio for years, with melodies that penetrate the skull never to leave. And yeah – I’ve TRIED…I’ve tried my entire life to not succumb to what becomes a somewhat tried, tested & true formula for music that generally acts the same way as heartworms do…but I CAN’T…and don’t leave me hanging here – honestly neither can YOU. We love the sound, the energy, the style, the melody, the brightness of the rise & fall of the emotion in both the vocals AND the music – and Red Air’s final song “83” might just have ALL of these pieces placed perfectly into the final song on their Simple Life EP.

Still under three-minutes in total-length like the other tunes, this final-cut packs a lot more into these 176-seconds in terms of shifting sound, versatility and dynamics in the writing. This time with a more Sum-41-esque opening…it begins with something that almost sounds a little typical for Red Air…but just past that first minute, I think some really magical things start to happen. The roll through the vocals around 1:10 have a stunning melody delivered flawlessly right before a complete breakdown that really kind of makes you appreciate that Red Air has really ripped through a ‘full-track’ at this point already before breaking it all down to reveal a whole new layer to their band & music. The isolated middle of “83” is a gorgeous display of alternative-sentiment and indie-emotion…and let’s face it – up until this point of the EP it’s entirely questionable as to whether or not Red Air had another gear other than full-throttle! They’ve done themselves and their music a great service with this final song – it opens the doors for the future and should allow them to incorporate all kinds of textures and sounds, moods & tempos into their music and have them be easily accepted by our ears. It’s a completely competent, confident and capable display of a whole other layer & dimension of Red Air and I think it’s something that really worked authentically well for these guys…one I’d only hope they’d continue to explore in the years to come.

Great energy, tight band from guitars to bass to drums and vocals that either scream-out & echo the energy of the grinding edge to the music, or flawless melodies to match the atmospheres they create. Definitely enthusiasm and confidence all throughout Red Air…I can’t imagine it would be long at all before seeing these guys popping up on stage just about everywhere; they make music that fits into just about every icollection, ipad and ipod out there. I think the Simple Life EP is a fantastic start and shows no cracks in the armour of this band when it comes to their song-writing – and I think as they progress and pull-away even more from their influences, Red Air will find their own defined sound beyond comparison that draws only from the creativity, charisma and attitude shared between all four of them. Excellent start – but I have little to no doubt that the best is still yet to come from this band…I think they could be capable of some of the extremely exciting sounds we’ll be hearing in this decade to come.

Support Red Air at Facebook through this link here: https://www.facebook.com/RedAirBand