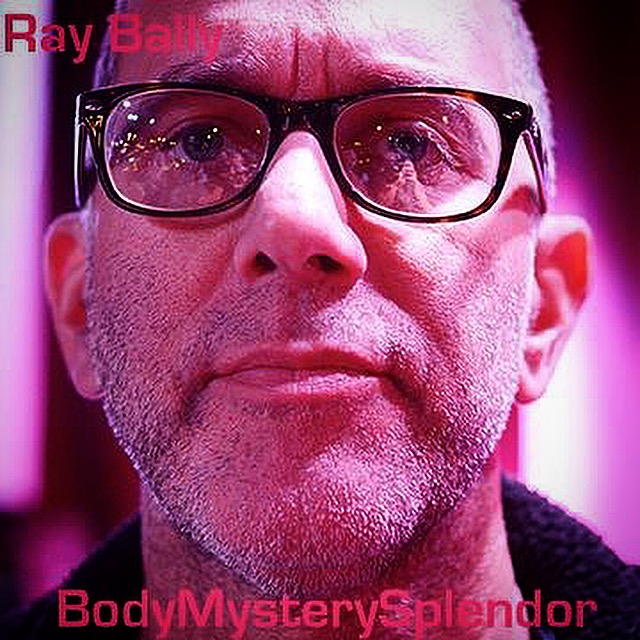 Almost immediately, you’ll likely notice the substantial difference between Ray Bally’s music and that of which you most likely normally listen to…and by substantial I’m inferring that there is actual SUBSTANCE to what you’re about to listen to & the fact that this element alone is bound to often be what sets an artist apart.  With the pursuit of art & music being more rare than people often give it credit for…that substance, those differences…that uniqueness is what I’m personally seeking at all times.

I don’t think things need to be perfect…I think music just needs to have an idea; as listeners, we’re flexible people…more-so than any one person would ever admit…but if you captivate us with something imaginative, passionate & true to yourself as an artist – that music could potentially last someone out there an entire lifetime.  As I began to listen to “Your Body” by Ray Bally…all I could think to myself originally was “DAMN” in SUPPORT of the ideas I was listening to.  In a sense, “Your Body” feels fragile in its structure as a house of cards…like this moment & groove Ray has found could fall apart or break at any moment; there’s a rawness & realness here that you’ll feel crawl right onto your skin hauntingly.  Facts are facts though…”Your Body” gets more interesting as it builds, evolves and plays…you get the incredible tribal-sounds of the drums…absolutely IMMACULATE guitar-tones & wicked sounds blending into an atmosphere that becomes so thick you could cut the air around you with a physical knife.

I’ve spent at least a couple days lost in Ray’s music…like…I’m sorry people – I only have this one set of ears and they’re both telling me they’re interested beyond belief.  The mysterious environment that Ray creates on BodyMysterySplendor’s opening cut “Your Body” felt like an entire mixture of sounds and ideas I could easily listen to all day.  Those guitar tones…talk about the unsung hero of my YEAR!  Apparently we’ve got two guitarists that play with Ray that assist in creating the extraordinary ideas, textures & tones we hear on guitars…real credit to both Dennis Young and Brad Kleiman for their work on this EP.  From what I’ve read and heard they both bring their own style to the sound with Dennis having a penchant for the spacier-atmospheric sounds and Kleiman opting for the crunchy, meaty riffs we hear.  And while overall I still think there might be a minor tweak to the production here & there on this opening tune – they’d be minor at best…personally I really like how this first track came out and think it connects strongly.  Ray’s vocals FIT…same logic applies – maybe a tiny moment here and there he might feel like he could hit even more strongly today – but I felt like the earnest & honest tone that he had ended up providing a smart contrast to the way we hear the entirety of sound on this first tune.  Combined with clever back-up vocals…it’s hard not to immediately latch onto the hazy beginning as the song descends into a highly imaginative groove that instantly hits the mark.

The texture on those guitar tones on “Your Body” is absolutely amazing, straight-up…Ray’s playing with some fantastic players and from what I gather, incredible humbled and honored to do so.  What I’m also more than happy to report – is that those guitars are a strength that seriously continues and threads itself deep into Ray’s music.  LISTEN to the beginning of “Mystery Play” and tell me that doesn’t remind you of some of the incredible indie-texture you’d find in the guitars of like…Mark Lanegan, Screaming Trees or even the Smashing Pumpkins Siamese Dream.  Anyone that knows anything about me knows I’d never chuck out a reference to Mark without meaning it and that the guitar tones, mix & texture on Siamese Dream are about all a listener could ever ask to hear.  “Mystery Play” creeps in slowly and breaks to a gentle & inviting sway, rhythm & groove that’s shrouded in a layer of slight noise-rock.

People are listening to this right?  If they’re not…they really freakin should be.  “Mystery Play” has that same amazing ability to absolutely captivate through the ideas and sound of the guitar-work alone.  With the steady combination of bass & drums always able to be relied upon to supply the groove – the guitars in Ray’s music really have a lot of freedom to explore different ideas, concepts and structures…there’s an ability he has whereby he can wander through a vast amount of terrain and come back to the main idea at any time to add emphasis & strength.  The alternative-rock/blues sound of “Mystery Play” is brilliant in how it begins and launches into its hazy groove…strong chorus harmonies…the words & vocals sound like they fit this track even more-so than the opener did.  Retaining that haunting mysteriousness in the atmosphere & vibe perfectly – Bally twists poetry through the intensity & uniqueness of the music surrounding him in blissfully clever ways.  Production-wise I felt like this track came out even stronger as well…I think whether or not a person would think this is a set of stronger hooks than its predecessor might be up for debate and ending in opinions largely based around personal taste as to which is enjoyed MORE.  Point being – these first two cuts from the EP are extraordinarily enjoyable…I really think Ray Bally is onto something here.

He does have this particular EP labeled as New Wave on his Soundcloud page…and that COULD end up being a factor for some.  I could make a solid argument for Post-Punk and perhaps even just straight-up Experimental-Indie…but New Wave might actually be a bit misleading…cause this isn’t the sound that people would associate with that typically.  It might contain a slight amount of the vibe – but the typical floaty & catchy synth-laden rhythms of that genre are not a factor here; just like I said at the beginning of this review – what Ray is doing is SUBSTANTIAL.  And don’t get me wrong…there’s a time & place for New Wave – I certainly love the genre…I just don’t know it to quite sound like this.  Closest that would come to it in my opinion would be the final song “Splendor & Hoax” which has Bally brightening-up the rhythm & vibe a bit more than the rest.  Even on this tune however…you could make a serious argument for Psychedelic & Space-Rock genres with a performance that’s almost Bowie-esque in nature…like a more rhythmically influenced version of “Heroes” almost.  In that same sense that Bowie could have examined any single one of his tunes and could have gone back into the booth to re-do the vocals in an effort to round-out some of the REALNESS – and then DIDN’T…Bally makes that same choice of honest, straightforward integrity in his sound, songs and music.  He FITS.  He might even be the first to tell you that’s the biggest variable in the music he makes with all the instrumentation & ideas locked down so tightly – but I’d completely encourage him to never go about changing this element of his overall sound.  That sincerity connects with us as listeners…Ray got me on his side early on BodyMysterySplendor and never lot that captivating grip through the humble display of brilliant ideas I found on this EP.  Ray’s clearly capable of some incredible things…he’s definitely a hell of a songwriter and makes insanely smart choices; even in the gentle rhythm & sway of “Splendor & Hoax” he makes time for insightful and stunning instrumentation and gives real space to each element of the music and ideas in the song.  Extremely cool stuff on all three songs of this EP…I really felt this one and think that Bally could certainly be an artist capable of writing many tunes that highlight his immense creativity and gift for writing music that’s truly captivating through its imagination, heart and gripping honesty.