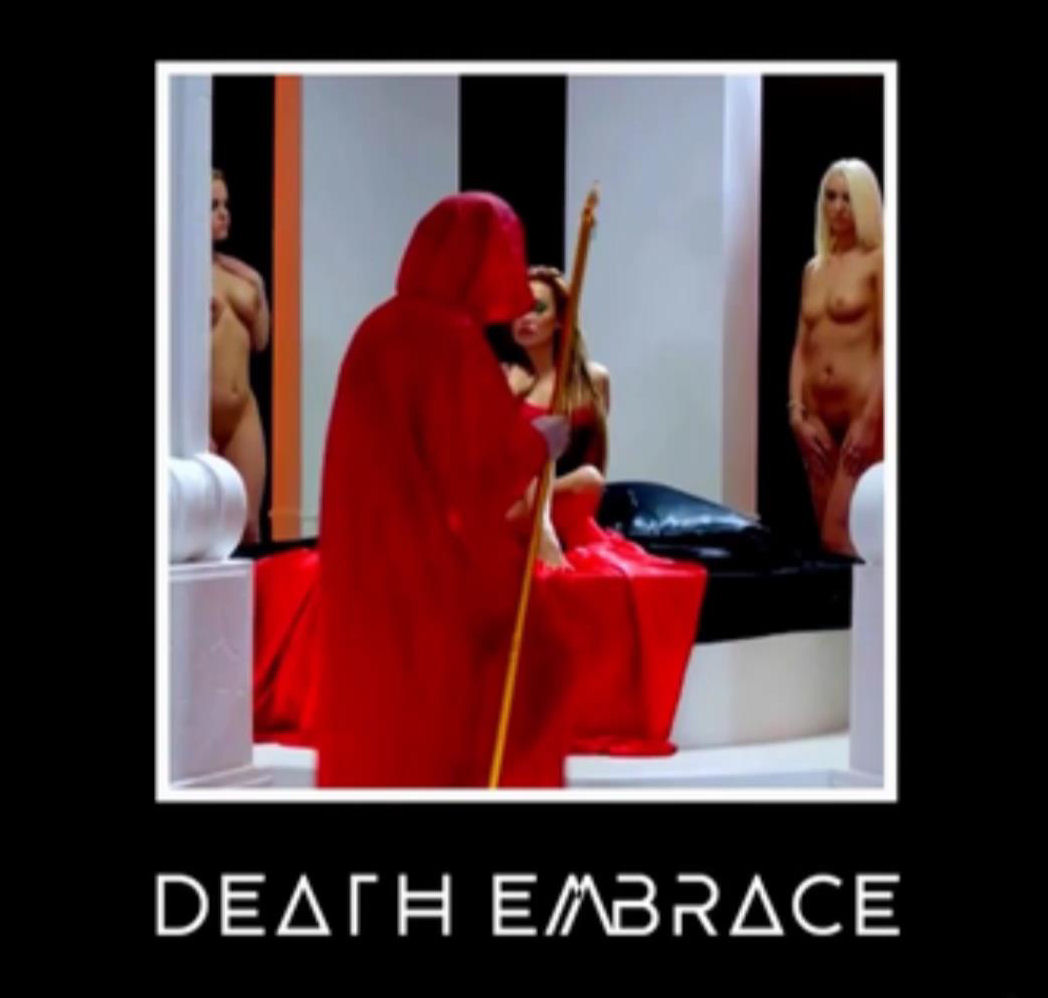 Absolutely STOKED about this EP and I’ve been waiting to share it with you from the moment I heard it. Atmosphere, ingenuity and innovation reign supreme throughout the Death Embrace EP from Rawzilk…everything sounds extremely captivating, unexpected and truly new. Lyrically, Rawzilk packs in an impressive amount of emotion – and puts it on display immediately through the devastating-end to the opening track “Rigor” where the lead female-vocals sing out “And I Lost Everything I Had” with heavy-feelings that stick to you. There’s already impact established within the scope of this first sparkling track with its swirling atmosphere and sweet, angelic singing.

Before we jump too far ahead…I should preface what I have to say about this next song, “Inherent” with a quick anecdote from my own personal life…it’ll help make all of what I have to say become much clearer, I promise. But you see…as a music-guy my entire life…I’ve had just about a million conversations that go like this:

Me: “So what kind of music do you listen to?”

Me: “Ahh, right on.” And I usually instantly assume they DON’T listen to everything…or at least not like I do. I’ll go on to try to obtain some actual specifics; it’s always amusing to me that people assume that replying with ‘everything’ might open the door somehow to more conversation, when usually it leads to the complete opposite effect. But eventually they get brave enough to ask as well…and for YEARS, I answered their question like this:

Person-X: “Well, what do YOU listen to?”

Me: “Believe it or not…almost everything I listen to sounds like a broken answering-machine.”  And to be fair, that usually ends conversations pretty quickly too.

So understand…when I say that I’m loving the Death Embrace EP by Rawzilk…well…make sure you also understand just how strange I am at the core of my very being too…cause then it all makes more sense.

But with all that being said – if you’re looking for innovative music that is going to test the limits of what your ears and brain understand as the ‘typical’ song track after track – this EP is every bit as much for YOU as it is for ME. A song like “Inherent” is brilliant from its very beginning, opening with hard-switches on an old KNOB-TV (as in, NO remotes yet y’all!) – I mean, how freakin cool is THAT? I don’t even know where you GET that sound anymore…but I’m old enough to remember hearing it, that’s for sure. It breaks into a storming, big-beat and male-led vocals…presumably from the main-man behind the music, Sal Rodriguez. He delivers a haunting performance that brings out the shadows lying inside the lyrics and truly finds a way to bring this music together through the verse before it finds its way to a grandiose-climb and subtle-exit from “Inherent.”

Although I enjoyed both vocal-sounds…I’d be lying to you if I didn’t say that there’s a downright hypnotizing quality in the female-led tunes – just like on “A Seeming Tragedy.” Overall…I think this was the game-changing track for me; “A Seeming Tragedy” reveals the real-art at work here on this album – and if you’ve stuck with what Rawzilk is all about until this point, you should feel like I do regarding the brilliance and genius way this song pulses on. Its contrasting elements of beautiful tones and grinding electro-sounds will be something you either ‘get’ or you don’t – but to me this is heaven – I could listen to this drone on for days. After a beginning that flows so smoothly with the added vocals creating a texture somewhere in between the most extreme-aspects of Portishead, Radiohead and their own-heads, hearts and ambitions – I think that “A Seeming Tragedy” is an extraordinary highlight. It rides the edge of post-rock and electro in a truly creative way; at over seven-minutes long, for sure – it’s going to be too much for some of you out there…but again…from an audiophile’s perspective…this is above & beyond all expectation.

Back to my point about the ‘broken answering machine’ though… If you can get through the swift changes and extreme dynamics of “Ron Pt. I” and be looking as forward to whatever “Ron Pt. II” might be (on whatever future record!) as much as I am…well…you hear music just as I do! “Ron Pt. I” overall is probably the most bizarre combination on the Death Embrace EP up to this point – but chances are…I have the feeling that a lot of the concepts driving this EP overall lie within the story told upon this track. In the midst of extreme switches and transitions in sound, texture and atmosphere…like, no kidding folks, I’m talking EXTREME…there is the angelic female-voice leading the way through a spoken-word piece. In a true representation of the energy and meaning of those words, her vocals are often twisted in just the right ways…demonically taking the sweet-tones and bringing them six-feet-under to match the energy, mood & tone of the lyrics. Really smart stuff here; and although ‘jarring’ would perhaps be an understatement as far as the amount of sharp edits, cuts & twists of the music are concerned…all I can do is acknowledge the extreme effort in making all this happen with the precision, professionalism and bold-approach it has – Rawzilk is cracking the bat 100% for me and “Ron Pt. I” is frantic audio-gold.

And you know…I don’t know that I necessarily assumed that Rawzilk would eventually have to peak somewhere along the way or what…but there’s zero-doubt in my mind that this EP has gotten progressively better, more dynamic and more entertaining all the way through. I cannot tell you any lies – I spent about half my day yesterday just listening to this EP over and over and over…I enjoyed every one of these extreme combinations of art & music…these are true ‘performances’ and this music is truly ‘entertainment’ of the highest caliber.

“Perish” the final track…is a large part of why I connect so strongly to this record. I’m sure there’s much of an argument that could be made that this is also the most accessible sound and song on the EP as well – but there’s no denying brilliance when I hear it. What I absolutely LOVE about this song…beyond anything…is both the female-vocals and the WAY they’re recorded. Swirling in a beautiful reverb and distant…set deep into the enveloping atmosphere – many people would be quick to potentially cite a young Shirley Manson on tracks like “Milk” from Garbage’s first record…but I’m hearing something different altogether and I’d be shocked to find out I was wrong… What I hear – is a massive fan of Tanya Donnelly…more specifically the alternative band of the mid-late 90’s, Belly. I know that I sure as hell was/am-still; and the sweet-sound of the vocals and the hollowness in the way that they’re recorded took me right back to the vibe I got from the first time I put on Belly’s debut-record, Star. “Perish” goes on to reveal itself to be much, much-more aggressive in its sound and scope than perhaps anything you’d find on a Belly record – but that’s the update on the sound here if you ask me…this is the next-level for what was started there, way back when. It’s dark, it’s sexy, it’s menacing…the song is out to cut you and let you lie there bleeding as the final notes come out – consider yourself warned.

I’ve got no complaints about this Death Embrace EP – how could I? How could you? How could anyone? We search and search and search for something that sounds truly different…for something that still finds a way to resonate and connect with our thoughts, feelings and emotions without sounding forced or straight-up pretentious…and this is exactly that combination of art & music that I’m always on the hunt for. Sheer-brilliance, wall-to-wall from Rawzilk; it’s probably a little on the extreme-side for most – but that’d be a known thing in making this style of music – and though it might take a while to catch on fully amongst the people…every part of making an effort and journey like this pays off for both its creators and listeners with paralleled-enthusiasm and timeless music to enjoy.