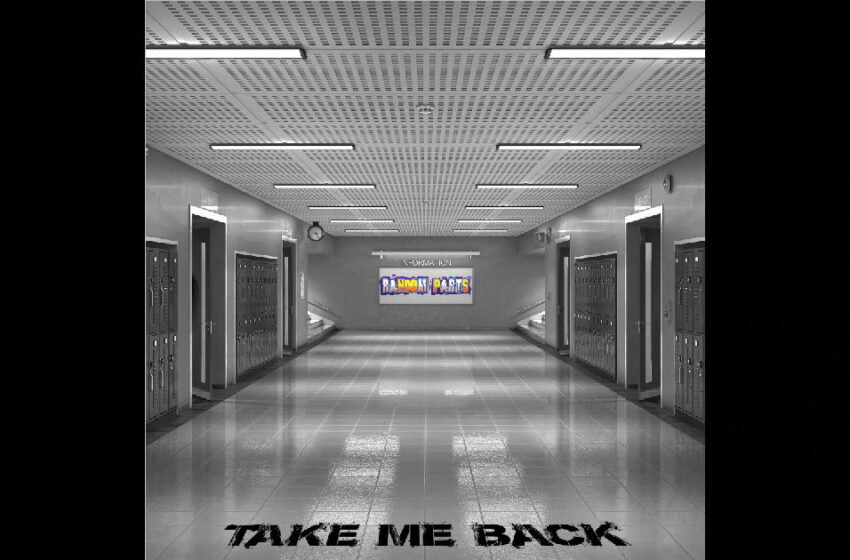 Here’s what I figure is fair game; if you’re a band or an artist out there using a formula to make your music…expect that the same formula you’re using both can, and will, be used against you later on.

So when you start up “Take Me Back” by Random Parts and you almost start singing “Photograph” by Nickelback in place of these words, don’t get it twisted – it completely serves them right in my opinion.  If you create a blueprint and you’re guilty of exploiting it yourself, fully expect others to do the same.

What makes things a bit more complicated is when you can hear the influence permeate other spots as well.  In the case of “Take Me Back,” not only will the opening surely remind you of the megahit single by Nickelback in its melody, but this particular track will also go on to explore a similar theme.  Re-read the paragraph above…every ounce of a song like this was being asked for – by you & by many out there.  Much like “Photograph” was built on nostalgia and the way things looked & were way-back-when, that’s the direction Random Parts heads with their new single “Take Me Back” as well…and it’s kinda hard to argue against almost seeking out a direct comparison here when it comes to the writing & execution to be found in this tune.  Was that Jonathan Brannon’s intention here?  The natural result of his own longstanding love of the Nickelback vibe despite all odds?  This is all obviously much harder to say for certain…but I can’t imagine that the comparison would be avoidable in this particular circumstance this time around.  People are gonna notice the similarities here…I truly think they’d be impossible to ignore.

On the other side of that coin is the fact that you can’t really argue with perfection either.  There’s a reason they developed a formula that allows you to overlay many of their songs to the second and both see & hear how Nickelback’s music develops, builds, hits the chorus etc. – and that’s because it works.  So too is the same rule in effect here for Random Parts – at the end of the day, you can also look at this new song as played as flawlessly as a tune can be – to the point where you have to recognize that if they had the same money machine backing them as the Canadian superstars ended up with, that this new project from Brannon would be printing paper right back in return and cashing those cheques with ease.  Because I’ll tell ya this Nickelback fans…if you dig that band, there’s virtually no reason you shouldn’t like or love Random Parts as well…they’ve almost blurred the line hard enough here to the point where slipping “Take Me Back” onto one of their records could potentially fool even their biggest fans if they weren’t scrutinizing it all too closely.  Depending on the intent of making this tune, that might equate to all-aces and a mission entirely accomplished – it’s that, or Random Parts flew too close to the sun here.  Keep in mind…you’ll see directly from the main website that the whole Daughtry & Nickelback sound is what this collaborative-based band is looking to create…so in a sense, this is right on target.  Too close?

Can’t argue with the stellar musicianship, can’t argue with the flawless vocals provided by guest-star Bobby John either…and ultimately, if we’re talking about songwriting, it’s really just as bulletproof, all comparisons aside.  The main issue with this cut is that it’s almost impossible to keep those comparisons aside…and that if I’m picking up on it, I’m not gonna be the only one who does.  While “Take Me Back” does eventually deviate enough in its pattern & melody to become a different tune, that initial hit of the design is definitely going to provoke warranted comparisons, as will the song thematically as it plays on.  To Brannon’s credit, he does a great job with his lyricism in the sense that he’s found that identifiable nostalgia so many people love to connect to, and put clever imagery into the words to bring YOU back to the days of high-school when things were a little more simple in many ways, and harder to navigate in others.  I felt like Bobby did a fantastic job in getting the outta the melody in the words here for sure.  From bad hair cuts to poor choices in clothing – it’s kind of amazing really that the vast majority of us would head right back to doing it all over again the exact same way if we could – and songs just like this one really get to the heart of why that is; it’s all awkward in retrospect, but equally comforting as well.

Well…for the most part, that is.  You see folks…sometimes great songwriting can be like watching a show in high-definition…and I don’t always wanna see the nosehairs of everyone onscreen, you feel me?  In fact, it’s really, really rare that I do…if I ever have.  Sometimes it’s unavoidable though – you look up, there it all is right there in front of you, flaws & all…one of your favorite actors, reduced to human status, all because of how much we can really see now in a solo scene on their own.  Lyrical imagery can possess a similarly awkward thread if we’re not careful, and I ain’t gonna lie to ya, there’s a bit of that here.  The question becomes – do you wanna revisit your pimple-filled days?  The answer is probably not if we’re being honest…that’s the kinda stuff we tend to like to forget if we can – but beyond that, is a word that conjures up an immediate image that would be extremely rare to be welcomed, you dig?  So it’s not so much about writing the word ‘pimple’ into “Take Me Back” – you might be able to get away with it if it had a little cover-up applied by the music…but the main issue there is that this word gets its own marquee moment to ring out loud in the spotlight practically on its own at one point on this single – and I really can’t say for sure what people will make of that.  That might be the point in a concert where the lighters go back in the pockets with a bit of embarrassment rather than singing along loud & proud.  Is it an accurate word to have used to describe these nostalgia-laced memories and time gone by?  Sure!  Sure it is.  But accuracy isn’t always just about finding something that fits…it’s more than that – accurate, or the ‘right word’ might not always be the best choice when it comes to the court of public opinion on songwriting; if I’m being real with ya, then yeah, there are probably more appealing ideas that could have found their way in here to capitalize on the intended sweetness in this whole vibe in a less jarring way than conjuring up the image of a bright-white puss-bag waiting to pop on some teenage face out there – that fair enough?  It’s hard to argue it’s sweet enough to fit…it’s kinda yucky my friends.

So yep…it’s gonna remind ya of your youth overall, and quite likely Nickelback in a few spots as well as it plays – but at the end of the day, you also have to acknowledge a well-constructed & well-played tune when you hear it, and this is also that.  Guitar tones are freakin’ fantastic, I really think that Bobby John has got something special goin’ on with the way he sings too…he’s got a genuine gift for connecting to the heart of a melody and he’s definitely put that right on display here with resounding confidence – and the production of the song itself is a massive standout for all its refinement & crystal clarity.  I might have moved on from the Nickelback sound day-to-day in my life now, but I was certainly right there at the heart of it all happening in Vancouver way back in the day, complete with actual pimples strewn all over my face surrounding my lil’ goatee I’m sure.  I honestly don’t mind at all revisiting that sound now, and “Take Me Back” also reminded me just how welcome it can be when doled out in proper doses & spaced out over time…this whole cut is built on nostalgia, memories, thoughts, feelings, and emotions that you can relate to…and it’s extremely hard to argue against a mission being accomplished when those are the kind of results achieved.  It might be awkward at points – but c’mon now, so was growing up & you know it.  Like I said, we’d do it all over again if we could, most of us…and when you realize just how welcome a song like “Take Me Back” is flowing through your speakers…it kinda confirms all that, wouldn’t you say?  The moment it starts inducing its nostalgia on ya, you’re hooked in, because chances are, a song like this really DOES take you back to the days gone by…there are plenty of people out there that’ll dig that & start cracking open their yearbooks all over again.

Learn more about Random Parts at the official homepage at:  https://therandomparts.com